Those of us who haven’t gone completely doolally in these self-isolating times might remember a few weeks ago I wrote  Coronavirus Diary 23 – A visit to Caesar’s Pond, Stanmore.   This post pretty much carries on from there and just 15 minutes walk through the woods, would I hope bring me to an extremely ancient battlefield.

I always love going out and exploring out on a whim.  Not having a smartphone all I can use is educated guesswork and hunches but that is a lot of front line history is all about.  I was particularly looking for an obelisk which is now in the grounds of the Royal National Orthopaedic Hospital.

The hospital was originally one of those grand Victorian institutions with expansive grounds, views of London and surrounded by forest and fields beyond.  No doubt much the same as it was 2,000 years ago.

The Obelisk is between the H for Hospital and Grooming Marvellous. The old Roman town of Suellani is in the field from the red marker on the right up to the M1 motorway and its possible some field markings can be seen. You can see Caesar’s Pond centre bottom under the accountants of Charterwell Accountants and my March Post Peeking Over London was at the Wood Farm viewpoint. My house is in the far left and in the bottom left is RAF Bentley Priory, the famous headquarters during the Battle of Britain. You can see even when I have a sore chest, my little walks aren’t so little.  So much to see and this map just covers one direction.

I decided to enter the hospital through a little used or known back route.  I did double check that it wasn’t being used heavily if at all in the pandemic as I definitely didn’t want to get in the way but it being Easter  (I think) and the site being so huge combined with the obelisk apparently being in some little visited area made me take the chance.

I found my little-used entrance, so little used that there was a deer grazing just outside the fence.  For some reason I always get a thrill out of investigating places, doubly so if I’m not really meant to be there! I’d like to think it is professional curiosity otherwise you don’t learn new things.  There was a bit of me thinking it was a bit crazy going into the lions den so to speak.

Surprisingly, I found the obelisk exactly where I worked out it should be so I didn’t have to nose around getting into mischief.

This site was once the scene of an epic battle when the British tribes united under the leadership of King Cassivellaunus who defeated the Roman Legions under the leadership of Julius Caesar during his second invasion Britain in B.C.54. Cassivellaunus was said to be a shrewd military leader whose subsequent handling of his forces and his use of guerrilla tactics, is what prevented Caesar from achieving the total victory over these lands that he was seeking.

The Obelisk was erected in 1750 as a memorial to what happened here by William Sharpe who was secretary to the second Duke of Chandos. In 1928 The Royal National Orthopaedic Hospital purchased 70 additional acres of land and in doing so inherited this historic monument which stands near the hop of the hill. At some time in history the original inscriptions had been lost, so when The Royal National Orthopaedic Hospital took ownership of the land, they restored the obelisk and had new inscription stones made. 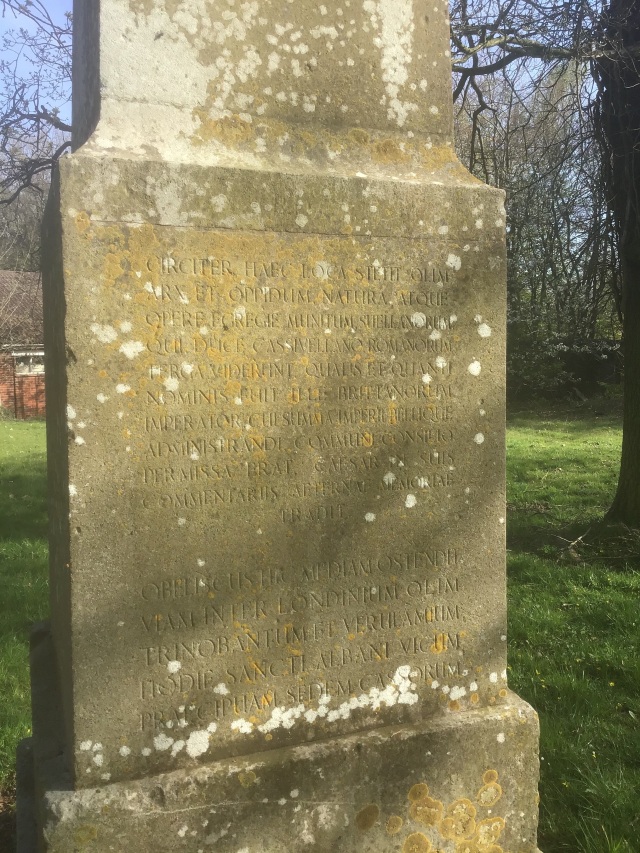 There is different information on each side of the obelisk.  This one in Latin is translated below.

But what do we know of Cassivellaunus?   Well he must have been an incredible figure to one way or the other see off multiple Roman invasion efforts.   He was the sone of Lud and Nennius and it it is King Lud who is credited with founding London and he is said to be buried near Ludgate.

Cassivellaunus is actually the first 100% verifiable British individual whose name is recorded and in the writings of  diary Julius Caesar himself in De Bello Gallico v.11 which is rather like a war-diary.   He was a king of a tribe or alliance of tribes immediately above the Thames and likely his people were the Catuvellauni centred at what is now St Albans.  His coins have been found across much of Southern England and into Wales.

How did this epic battle come about?  It all started off with Caesar writing to to Cassivellaunus from Gaul, what is now France, demanding tribute but this is flatly refused.  Caesar gathers a fleet and invades and though has some limited success finds it difficult to make any real headway and is driven back to Gaul.

Refusing to take no for an answer, two years later Caesar attempts to invade with a larger force, and is repelled by the planting of spikes in the Thames, which slows down progress dramatically.  Cassivellaunus himself is said to have been key in organising this defence.

Meanwhile internal warring within the British tribes was taking place with Androgeus’s nephew accidentally killing Cassivellaunus’ nephew, and the king demands him handed over. Angry, Androgeus refuses, Cassivellaunus threatens war, and Androgeus asks Caesar for help which just as today provides the pretence needed of a legitimate invasion. Caesar invades at Richborough and Cassivellaunus is quite successful at pursing what we would now call guerrilla warfare and attacking the Romans in situations where there superior strength can’t be brought to use such as in the woods that I often walk within.

This obelisk marks the spot of one of his legendary victories over the Roman invaders.  Sadly, Cassivellaunus was betrayed and cornered but in the end agreement was reached and Cassivellaunus was allowed to keep his kingdom, whilst Caesar returned to Rome and took the aggrieved Androgeus with him.

It seems likely that Cassivellaunus may have agreed to pay some nominal tribute to get rid of the Romans though it seems just as likely that Caesar was glad that he could return back to Europe and quietly call the whole thing off.

Thanks largely to Cassivellaunus, the peoples of the British Isles were free of Roman occupation for almost another 100 years.

The main inscription on the obelisk reads as follows:

Near this place once stood the stronghold and township of the Suellani, a position splendidly fortified by nature and art. This tribe, under the leadership of Cassivellaunus, defeated the Romans. Caesar in his commentaries has put on record forever the greatness and renown of this British general, to whom by common consent the supreme command and conduct of the war has been entrusted.

This obelisk marks the midway point between Londinium (London), once a town of the Tribobantes and Verulamium (St. Albans) the principal township of the Cassi.

I continued my walk that day towards two more ancient historical places.  The hospital grounds must be a mile or so across, I vaguely knew some of the area as when I was about 16 I spent 3 weeks working as a fundraiser there for the Summer charity event.  My chief successes were obtaining a signed cricket bat from the West Indies team and a helmet from Formula 1 champion driver Nigel Mansell, a feat that astounded the professional adult team there.

After about 15 minutes with only two close Covid19 shaves I existed the hospital which was almost opposite where I wanted to see next, the supposed site of  Suellani (mentioned in the inscription) which a century later in Roman times became Sulloniacae.   I say supposed as it has mostly long vanished though tentative archaeological excavations have brought up Roman pottery and other goodies.    The roadside that I took these photos from is the A5, an old Roman road which visitors to London may be familiar with as it starts at the famous Marble Arch and which locals know as Watling Street (see below).

There is an information board next to the obelisk with the following text for those who are super interested in these things!

The Obelisk stands on what was the territory of the Catuvellauni, a dominant Celtic tribe whose king was Cassivellaunus, or Caswallon, as known to his people. The tribe occupied an area which is now Hertfordshire, Berkshire and Buckinghamshire, with the capital at Wheathampstead.

Julius Caesar invaded Britain with two legions in B.C.55, but went no further than Kent. In B.C.54 Caesar came again with five legions and 5000 cavalry and met strong resistance from the men of Kent. He crossed the Thames and advanced along a trackway through the forest. The fair-headed Britons in their scythed war chariots harassed the Roman columns. The legions also met string resistance from the Brythonic settlement and fortification of Sulloniacae whose site is near to the entrance to the Hospital grounds. It is conceivable that the Celtic inhabitants had dedicated their habitation to the goddess Sulis. It is not known what they named their settlement; Sulloniacae was the Roman way of rendering its Celtic name. The Roman army only advanced as far as Wheathampstead which was heroically defended by Cassivellaunus. After imposing a tribute Caesar and his army returned to Gaul. The tribute soon ceased to be paid.

Almost a century passed before another invasion took place although during the interval there was much intercourse between Britain and the Continent. The conquest of Gaul brought with it Latin civilisation and Britain came within the orbit of Roman influence. In A.D.43 the Emperor Claudius began the conquest of Britain. He came with his troops along the road known as Sara Gwyddelin which means the Irish Highway. It went from Dover to Holyhead passing close to Sulloniacae on its way. The Romans spoke of “Gwyddelin” as “Weatlinga” which again became “Watling” to succeeding generations and thus “Sara Gwyddelin” became known as “Watling Street.”

After the conquest the Romans usually allowed the tribes to be governed by their native rulers and the Celtic aristocracy were encouraged to adopt Roman dress, to speak Latin and were recognised as Roman citizens. By this means the goodwill of the native population was obtained and it continued for over three and a half centuries. Indeed the forced departure of the Romans in 410 by the threat to Rome by Alaric and the Goths was deplored. The Roman occupation left a permanent impression on the native language. Over 2000 Latin words were added to the Welsh vocabulary (e.g. “church” in Welsh is “eglwys”, “bridge” is “pont” and “window” is “ffenestre.”)

I hope you enjoyed my historical detour.

I am a writer and traveller with a penchant for history and getting off the beaten track. With several books to my name including several #1 sellers. I also write environmental, travel and history articles for magazines as well as freelance work. I run my private tours company with one tour stated by the leading travel website as being with the #1 authentic London Experience. Recently I've appeared on BBC Radio and Bloomberg TV and am waiting on the filming of a ghost story on British TV. I run my own private UK tours company (Ye Olde England Tours) with small, private and totally customisable guided tours run by myself!
View all posts by Stephen Liddell →
This entry was posted in history, Life, London and tagged Cassivellaunus, Catuvellauni, Coronavirus, Diary, Julius Caesar, Romans, Royal National Orthopaedic Hospital, Stanmore, war, Watling Street. Bookmark the permalink.

7 Responses to Coronavirus Diary – Social distancing on the battlefield with King Cassivellaunus – kicker of Roman ass!