Looking for a neolithic burial mound in my local (Cassiobury) Park

It’s reached the time of year that I’ve gone a bit doolally  and I mean more doolally than I generally am from the 1st of January until around the 31st December each year.

I’ve not had a day off for years and been out on tour every day for months.  I also feel that I’ve been on the computer far too much as because despite being out for 7-10 hours a day, I also do Admin work for up to 7-10 hours each day too.

Due to a triple whammy of last minute cancellations today, I had the day off.  Well not really off as I worked from 5am-10am on the computer and was back at it from about 2pm.  The eagle-eyed of my readers will notice however that 4 hours of my day-time were entirely unaccounted for which is a rare thing indeed for me.

I really didn’t want to spend all day on the computer even if I were writing on my next book.  Instead I set myself a challenge of seeing if I could find any really old and unusual historic sights not far from home but easily accessible by public transport.  So I missed out the obvious Roman St Albans and various other historic and pre-historic that would involve trampling through mud (London has just had almost 2 months of rain in 36 hours).  I also decided not to include mental asylums or ancient pubs which I felt would have been cheating.

As it happened I found quite a few and so though I would visit 3 of them which I managed to do quite easily in less than 3 hours.

My first escapade took me to Cassiobury Park in Watford.  I have mentioned it in passing before in as Troy McClure might have said such hit blog posts as A walk along the Grand Union Canal  or  London – The first National Park City in the World .  Outside my blog the park has even been the setting for a planet on Star Wars.

I knew of various historical spots in and around the park but on Monday I became aware that right in the middle of this park I know so well there may be a pre-historic mound or barrow.

Finding this mound was to be no easy task in a park bigger than Londons Hyde Park and with an almost totally undocumented and not very pronounced mound too.   I managed to find a glimpse of it on Google Maps at a favourable time of year. 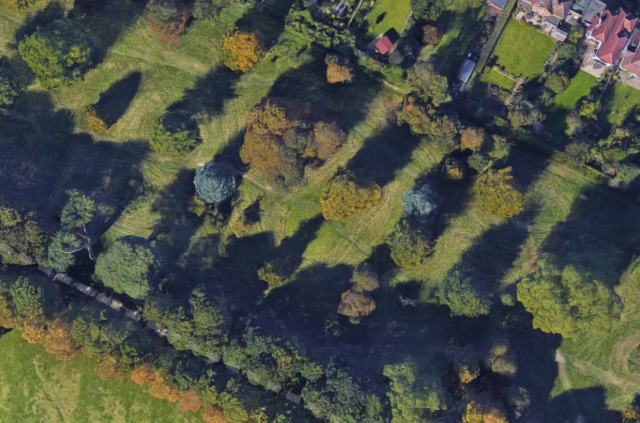 I’m always one for going out on a wild-goose chase (might I shamelessly plug my book on idioms Straight From The Horse’s Mouth).  As soon as I arrived within half a mile of the supposed mound or barrow I realised I had forgotten one of the most basic tenants of British archaeology and that is don’t go looking for something hidden in the middle of summer when grass and everything else can grow inches in a week let alone over months.  I couldn’t see any of the marker trees that I had in my head as they were all obscured by other trees and I had deliberately left my phone at home, not that it has maps on it being from the 1990’s.

Surprisingly I found the mound rather quickly though it was even less pronounced than I’d been told it was… and it was about 100 yards from where I thought it might be.  Oh and it ended up not being a mound at all but only some natural feature bothered by a dense nest of brambles.  I did though take a photo just incase I didn’t find a more suitable candidate.

I needn’t have worried as a minute later I had found a very subtle but definitely looking mound a little way on.  You have to be used to looking for mounds to even spot this one and two ladies walked by it without giving it a second thought. 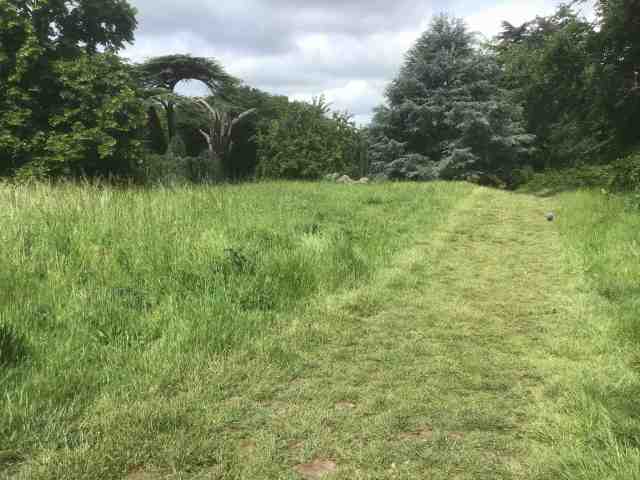 It is a circular mount about 15 metres (45 feet) in diameter and only reaching a prominence of 1 metre around the surrounding area.

The centre of the mound is marked by a rough wood carving of a prehistoric dead body or perhaps more likely of a sleeping figure. 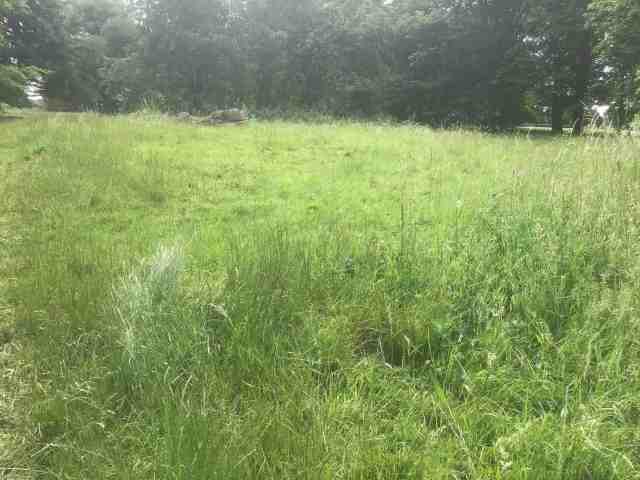 In fact I realise now that I had actually walked over the barrow about 10 years ago and joked that it might be a burial mound but I had no idea that I had all but discovered it.

You can just make out the curvature of the mound on the photo above amongst the long grass.  It might not look much but this mound might just be 5-6,000 years old and back then it would have been altogether something more spectacular.  The ground slopes further away near the camera as it heads down to a river, something that would have been even more attractive to neolithic people than to joggers in the park today. 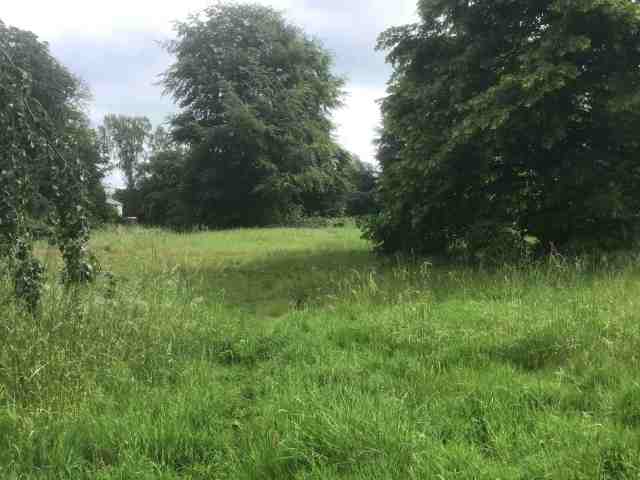 Apparently it is easier to define when the grass is cut, though only slightly so.  There has been no archeology on the mound to discover what if anything might lay deep underground but it was identified as a possible neolithic earthworks monument in a 2013 document.  But you can just about see it on the photo above.

There are many better defined mounds and barrows even within a few miles of this one but if you’d like to see my favourite then check out my post West Kennet Long Barrow – A 6,000 year old burial tomb which has a fantastic video I filmed too which goes inside one of the best preserved barrows in the world.

I’m glad I found it and I also forgive myself for not really knowing about it before this week.  Given that if it is an authentic mound, it is thousands of years old then it may well not be excavated until long after we are all gone.

One of the things I wanted to prove today is that there is weird and secret history wherever we live, we just have to keep our eyes open, question everything and do a little research.  This was only the first stop off of the morning however and I had two more to make.

I am a writer and traveller with a penchant for history and getting off the beaten track. With several books to my name including several #1 sellers. I also write environmental, travel and history articles for magazines as well as freelance work. I run my private tours company with one tour stated by the leading travel website as being with the #1 authentic London Experience. Recently I've appeared on BBC Radio and Bloomberg TV and am waiting on the filming of a ghost story on British TV. I run my own private UK tours company (Ye Olde England Tours) with small, private and totally customisable guided tours run by myself!
View all posts by Stephen Liddell →
This entry was posted in geography, history, Life, London and tagged Burial Mound, Cassiobury Park, hertfordshire, Long Barrow, Mound, Neolithic, Watford, West Kennet. Bookmark the permalink.