The Roman Wall in an Underground London Car Park

In those few days between Christmas and New Years Day when it seems I am about the only person at work in London, I gave myself extra time to get into the city before meeting my tourists.   Normally busy roads or roads where traffic is at a perpetual standstill were so empty that I could walk freely in the middle of the road and quieter places were of course entirely bereft of people.

Standing in the middle of a busy London street right in the heart of the City but almost deserted.

I went off exploring as I so often do.   Not that I’d ever advocate trespassing 🙂 I do like to nose around whether at home or abroad.  Sometimes it gets one into a tight spot but generally it opens up doors of opportunity… even if the door says DO NOT ENTER.

The days at the end of December present enormous opportunity to explore and gently push at the boundaries of what is acceptable or rather accessible and it is about the only week where the centre of London feels as open and empty as walking in a forest or mountains; as if I have somehow survived a zombie apocalypse.  Even security guards seemingly are on holiday or they are fewer in number and those you find are more good natured and likely to encourage ones curiosity rather than bar the way… perhaps as they are bored.

If there are any ‘bad’ areas of the City of London and I don’t think there are but if there are then I surely found one or two so much so that I had to check there was no one hiding in alcoves or the various street levels that go from from Roman to modern times and more than once I thought to myself that if anything bad were to happen, I would not be found for at least a week.  It was all rather exciting!

One day I took the opportunity to ‘discover’ a new section of Roman Wall.  There are Roman City Walls in various places (Look at this which I found under a London Hairdressers shop) and some of it is very easy to see whilst others are more tricky.  Some are trickier still to find if they have been knocked down by Georgians, stolen by Vikings or blasted by the Luftwaffe.

As I was meeting my tourists just 15 minutes walk away and I had 40 minutes to play with, I decided to bag myself a new pice of wall and taking advantage of the total lack of cars I walked down the spiral ramp to the underground carpark in the Barbican.  This stretch of wall was only discovered after WW2 when everything above got flattened, for all the destruction they caused, the Luftwaffe actually unearthed plenty of Roman remains in this corner of London.

I found it easily enough even though I wasn’t 100% certain I was in the correct car-park, it was the one that I would have expected it to be in.  I must say that I didn’t expect the car park to be so loooooong, one long line that pretty much goes underneath the cleverly named London Wall street.

Looking for a Roman Wall in a never-ending underground carpark.

Just when I was beginning to wonder what on earth I was doing, how would I ever get out and is it still socially unacceptable to relieve yourself if you really need a toilet and you happen to be in an empty underground car park, I found what I was looking for.

Who put a Roman Wall in my parking space?

Sadly the wall itself was fenced off as the City of London Corporation are in the process of presenting this segment in a better fashion and no doubt protect it from parking cars.  I’m not going to comment as to whether I squeezed past the railings.

The Roman Wall with its characteristics layers of red tile. 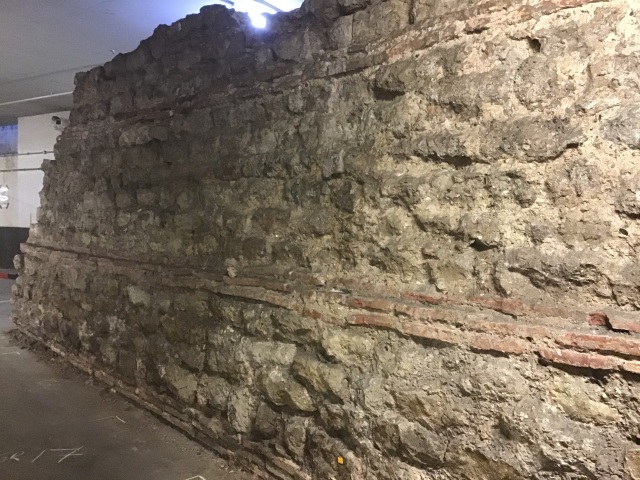 This wall dates from around 110AD and is actually a connecting wall to the Roman Fort and barracks that were at the northwest corner of Londinium with perhaps 1,000 soldiers here though most of the remains of this fort are not generally accessible to the public unless through a special visit with the Museum of London. 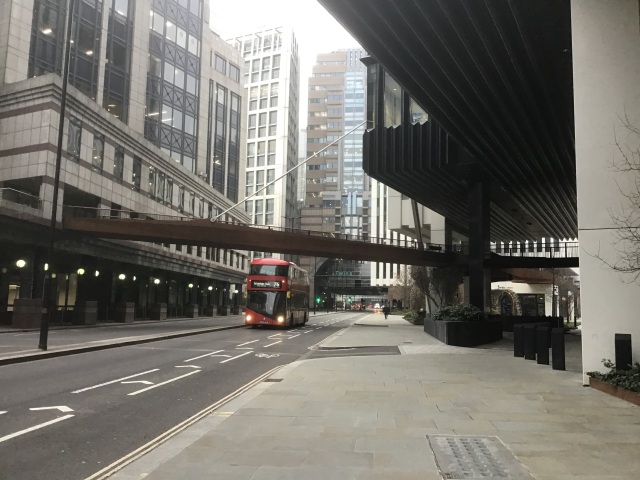 Who would believe that I’m standing 30 feet above a Roman Wall?

You can see my post on the Roman Temple of Mithras    and also the London Colloseum, both of which are underground and both discovered accidentally during the 20th century.   If you’re visiting London and want to visit actual Roman sights with me then check out my London Roman Walking Tour…. I don’t plan to put this stretch of wall on the tour but if you’d like to see it then I’m sure I can squeeze it in!

I am a writer and traveller with a penchant for history and getting off the beaten track. With several books to my name including several #1 sellers. I also write environmental, travel and history articles for magazines as well as freelance work. I run my private tours company with one tour stated by the leading travel website as being with the #1 authentic London Experience. Recently I've appeared on BBC Radio and Bloomberg TV and am waiting on the filming of a ghost story on British TV. I run my own private UK tours company (Ye Olde England Tours) with small, private and totally customisable guided tours run by myself!
View all posts by Stephen Liddell →
This entry was posted in history, Life, London, Ye Olde England Tours and tagged Archeology, history, holidays, London, Roman, Roman Wall, walking tours. Bookmark the permalink.