The Metropolitan Drinking Fountain and Cattle Trough Association was an association set up in London by Samuel Gurney, a Member of Parliament, and philanthropist and Edward Thomas Wakefield, a barrister, in 1859 to provide free drinking water.

Originally called the Metropolitan Free Drinking Fountain Association it changed its name to include cattle troughs in 1867, to also support animal welfare.

Water provision in the nineteenth century was from nine private water companies each with a geographic monopoly, which provided inadequate quantities of water which was often contaminated, as was famously discovered by John Snow during the 1854 cholera epidemic. Population growth in London had been very rapid (more than doubling between 1800 and 1850) without an increase in infrastructure investment. Legislation in the mid nineteenth century gradually improved the situation. The Metropolitan Commission of Sewers was formed, water filtration was made compulsory, and water intakes on the Thames were forced to be moved above the sewage outlets.  My blog is full of posts with Victorian problems with public health in London…. (The Restoration of the Aldgate Pump of Death!   Dancing on the Dead at Enon Chapel – The Victorian Sensation!     The famous farting lamp of London   A grisly end for a brave Liddell at St. Botolph’s… Aldgate (Whitechapel).   Bunhill Fields – the resting place of some of the biggest names in history. )

In this environment the public drinking fountain movement began, initially in Liverpool where the local government was granted the ability to buy out the private water companies in 1847. It built the first public baths and then encouraged philanthropic public drinking water fountains. This was taken up by Samuel Gurney.

The Society was inaugurated in 1859 with the requirement “That no fountain be erected or promoted by the Association which shall not be so constructed as to ensure by filters, or other suitable means, the perfect purity and coldness of the water.” The first fountain was built on Holborn Hill on the railings of the church of St Sepulchre-without-Newgate on Snow Hill, paid for by Samuel Gurney, and opened on 21 April 1859. It was moved in 1867 when the Holborn Viaduct was built but reinstated in 1913 where it remains.

The fountain became immediately popular, used by 7,000 people a day. In the next six years 85 fountains were built, but much of the funding came directly from the association; much of that money was provided directly by Samuel Gurney, as donations were not sufficient.

Gradually the association became more widely accepted, benefiting from its association with Evangelical Christianity and the Temperance movement. Many were known as temperance fountains. Beer was the main alternative to water, and generally safer. The temperance societies had no real alternative as tea and coffee were too expensive, so drinking fountains were very attractive. Many were sited opposite public houses.  In fact the oldest one in the old drawing above is still here and right opposite the Viaduct Tavern Pub, a pub I often take people to on Ye Olde England Tours Pub Walks.

The evangelical movement was encouraged to build fountains in churchyards to encourage the poor to see churches as supporting them. Many fountains have inscriptions such as “Jesus said whosoever drinketh of this water shall thirst again but whosoever drinketh of the water I shall give him shall never thirst”. By 1877, the association was widely accepted and Queen Victoria donated money for a fountain in Esher.

Until the last few years London was ill-provided with public drinking fountains and cattle troughs. This matter is now well looked after by the Metropolitan Drinking Fountain and Cattle Trough Association, which has erected and is now maintaining nearly 800 fountains and troughs, at which an enormous quantity of water is consumed daily. It is estimated that 300,000 people take advantage of the fountains on a summer’s day, and a single trough has supplied the wants of 1,800 horses in one period of 24 hours. Several ornamental fountains have been provided by private munificence….

In collaboration with the Royal Society for the Prevention of Cruelty to Animals, troughs were built for horses, cattle and dogs. Live cattle were still brought to market (at Smithfield and the Metropolitan Cattle Market); horses were vital for transport. Previously troughs were provided for patrons of public houses or for a charge (one example was inscribed All that water their horses here Must pay a penny or have some beer), and free ones made a huge difference; Hansom cabs travelled with maps showing the new free troughs, and they have been described as Victorian filling stations.

The surviving cattle troughs are mainly large granite ones, in many cases planted with flowers. Earlier designs were of cast iron or zinc lined timber, but both were too easily damaged and it’s fair to say they are ‘everywhere’.

Here is one just a few minutes from where I live and within sight of the Victorian pump (Coronavirus Diary 18 – Social Distancing with Typhoid!) I wrote about last week. 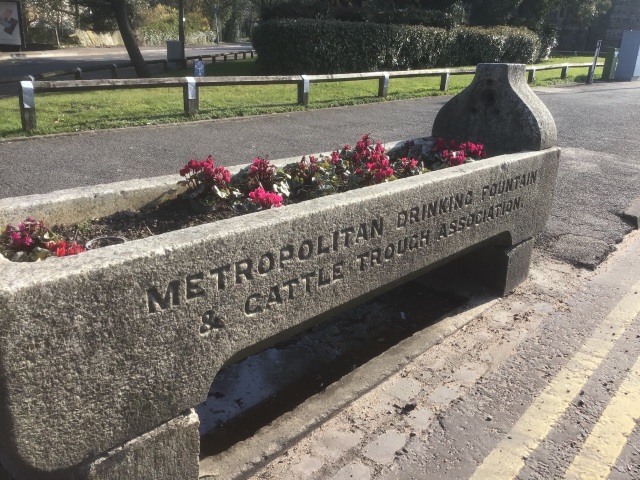 Just across the road, the grey old building is one of those pubs I have mentioned recently where Highwaymen used to meet.

In 2011, as the Drinking Fountain Association, it began to support the Find-a-Fountain campaign to map the UK’s drinking water fountains and also continues its work to provide clean drinking water in parts of Africa and Asia.     With the current awareness of the negative impact of plastic on the environment, in the last year or so a new wave of 21st century free drinking water fountains are appearing throughout London and the U.K. in ever increasing numbers such as this one below in Russell Square, just a minutes walk from the old Victorian taxi cafe I wrote about a few months ago in The secret green huts of London.

I am a writer and traveller with a penchant for history and getting off the beaten track. With several books to my name including a #1 seller, I also write environmental, travel and history articles for magazines as well as freelance work. Recently I've appeared on BBC Radio and Bloomberg TV and am waiting on the filming of a ghost story on British TV. I run my own private UK tours company (Ye Olde England Tours) with small, private and totally customisable guided tours run by myself!
View all posts by Stephen Liddell →
This entry was posted in Heritage, history, Life, London, Ye Olde England Tours and tagged Bushey Heath, Cattle Trough, Drinking Fountain, Russell Square, The Metropolitan Drinking Fountain and Cattle Trough Association, Victorian, Water, Ye Olde England Tours. Bookmark the permalink.