Recently when I was in the area for my Hadrians Wall walk, I took a detour to a place I had long wanted to visited.  Not too many miles from the ancestral home of George Washington which I visited on the same trip.

Whilst sights such as the Holy Island of Lindisfarne and Durham Cathedral are renowned throughout Christendom, what is less known is that the area is also home to the oldest stained glass window in the world, albeit with a caveat attached.

The story starts 1400 years ago with Northumbrian nobleman Benedict Biscop (about 628–90), who visited Rome and was inspired by the Christian life he saw there.

In 674 he approached King Ecgfrith of Northumbria for land for a monastery. He was first given a large estate to found St Peter’s, Wearmouth, and then in 681 received land at Jarrow to found St Paul’s. The twin monastery probably once owned much of the land between the rivers Tyne and Wear.

Biscop brought stonemasons and glaziers from France, who created some of the first stone buildings in Northumbria since the Roman period. Excavations have revealed that the earliest monastery had two churches, lying parallel to two large buildings, with a guesthouse close to the river.

It was not uncommon for Anglo-Saxon monasteries to have more than one church. The larger one may have served local people as well as the monks. The smaller church was perhaps reserved exclusively for monks, or may have been used as a funerary chapel.

Of the two other large buildings, one had settings in the floor that might have supported seating. Food debris such as fish bones was also found, suggesting that this was a refectory.

The other building contained a large, finely decorated room, probably used as a communal hall. In it was a central stone seat from which the abbot may have presided over meetings of the monks. Each building may have had an upper floor containing dormitories.

At the far left of this building was a suite of two rooms divided by a low screen. The finer room was perhaps an oratory, with an altar, and the other a living room.

The guesthouse by the riverside was finely decorated with painted plaster and coloured glass windows. Craft and industrial activity (such as metal- and glass-working) also took place on the riverside. There is evidence for terraced gardens on the south-facing slope towards the river, where vegetables and herbs were likely to have been grown.

The monastery’s reputation spread throughout Europe, chiefly because of the scholarly writings of the Venerable Bede. Bede entered St Peter’s in about 680 at the age of seven, and spent his life in the twin monastery of Wearmouth–Jarrow, which he described as ‘one monastery in two places’. 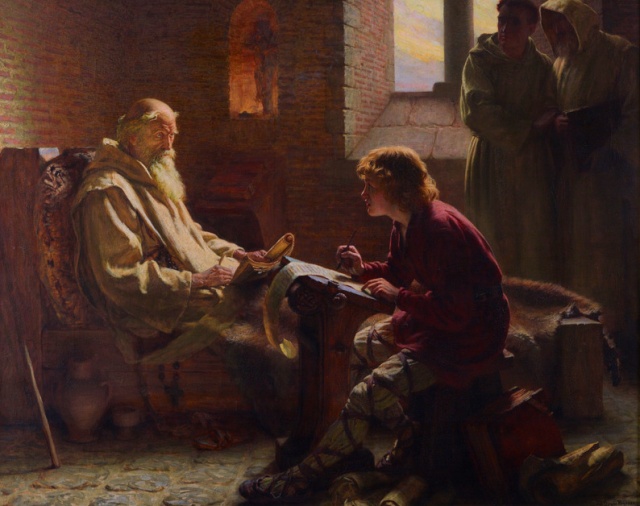 The Venerable Bede translating the Gospel of John on his deathbed. Painting by James Doyle Penrose in 1902.

During the 9th century monastic life here declined, although the site may have remained a place of pilgrimage because of its association with Bede. In the 1020s some bones, thought to be Bede’s remains, were taken from here to Durham Cathedral.

The monastery was re-established in the 1070s by Aldwin, prior of Winchcombe in Gloucestershire, who was inspired by reading Bede’s Ecclesiastical History to visit the holy places of Northumbria.

With the permission of the Bishop of Durham, Aldwin began to rebuild the monastery. He introduced a Benedictine-style layout for the monastic buildings, based on a central cloister with an enclosed walkway where members of the community could spend time in prayer and contemplation.

Aldwin’s monastery was never completed, although it was used until the Suppression of the Monasteries on a much smaller scale than before.

The east range of the monastery was finished, but the south and west ranges were still being built when construction was interrupted in 1083. Aldwin was invited to become prior of Durham and the Wearmouth–Jarrow monks were relocated there to become the centre of the newly reformed monastic community.

By the 12th century, however, monastic life was re-established here as one of nine dependent cells of Durham. The religious community was very small: a master in charge of one or two monks, who were based here for only about three years before returning to Durham. At that time Jarrow was one of Durham’s poorest dependent cells.

The main monastic buildings were altered in the 13th and 14th centuries – new buildings were added in the south range and the cloister arcades were removed. The community functioned much like a manor house, supported by a home farm and lay servants. The wider estate included a barn, granary, buildings to house animals, and a windmill.

After the priory was suppressed in 1537, the eastern part of the church remained in use as the parish church. The larger church was demolished and replaced in the 18th century, and was then rebuilt by George Gilbert Scott in the 1860s.

Between 1963 and 1978 the monastery was excavated extensively, and it is now one of the best understood Anglo-Saxon sites in England.

Bede Metro station on the Tyne and Wear Metro.

It was a bit of a trek to find I can tell you without the use of a car and with no smartphone or maps, I sought out the site from memory and best-guesses that involved two metro trains a boat and a rather long walk through an industrial estate.

It was in the midst of the longest and hottest spell since at least 1976 as could be seen by the rather sorry looking river I crossed.

The River Don, reduced to a slow moving trickle.

I don’t think I have ever been lost, enjoying some pigeon brain sense of direction.  I didn’t think I was lost now but I was almost ready to give up given I was mean’t to be on a week long hike when suddenly through the trees I had found what I was looking for.

St Paul’s church with the ruined monastery to the right.

As can be seen from the photos below, I had the whole place to myself… which seems to be a habit of mine whether out exploring on my own or giving tours for other people. 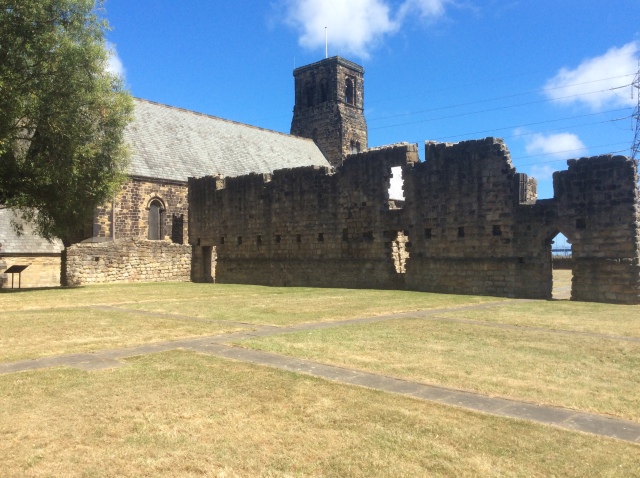 It was nice to wander around the ruins of the monastery which were no doubt located here as they were right next to the River Don and larger Tyne.   In fact there was once a larger harbour area nearby which over the 1500 years or so has now been filled in and currently has thousands of Nissan cars from the nearby factory, waiting to be exported around the world. 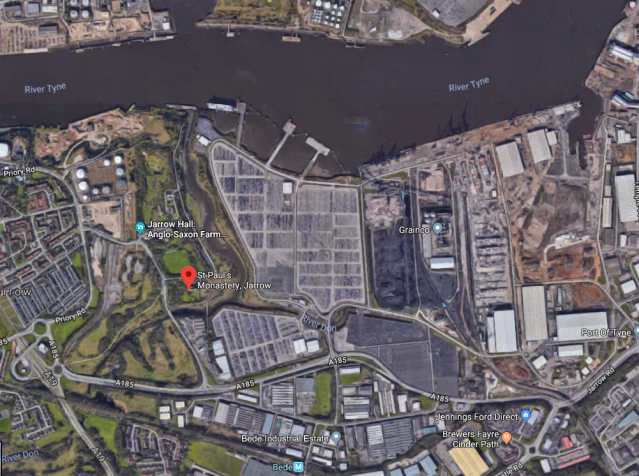 Bede Station at the bottom with the many thousands of Nissans laying in reclaimed land.

As much as the ruins were fascinating to see and well worth the visit alone, they were just a little aperitif before the main course.  For though the monastery itself is no longer anything but ruins, St Paul’s Church is still here and inside amongst several other treasures, is the oldest stained glass window in the world.

Inside, the church was as beautiful and ancient as could be hoped and the staff inside there were effusive with their greetings and artefacts.  People visit from all around the world just because of the connection with the Venerable Bede.

Towards the back of the main church you can find the oldest remaining section and it is in here that the window I was looking for would be found. 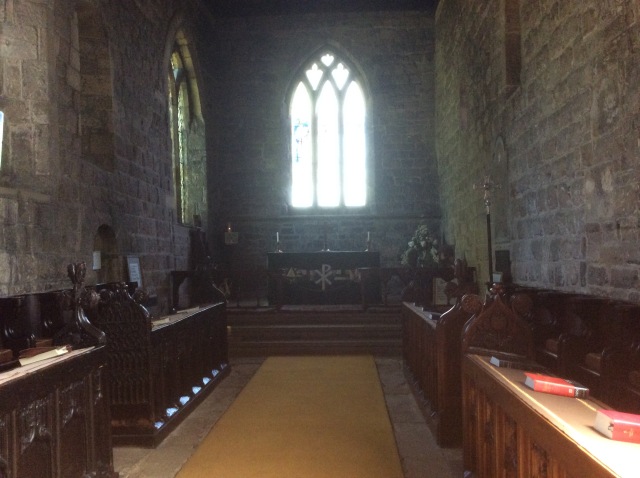 The chancel is a direct survival from the 7th century in which Bede worshipped when it was a free-standing chapel of the monastery. Cemented into the wall of the tower, is the original stone slab which records in a Latin inscription the dedication of the church on 23 April AD 685, which is the oldest church dedication stone in England.

The dedication of the basilica
of St. Paul on the 9th day before the Kalends of May
in the 15th year of King Ecgfrith
and in the fourth year of Abbot Ceolfrith founder,
by God’s guidance, of the same church.

Alas my dedication was not deemed sufficient to be able to see the stained glass window in all its glory.  I had obviously come a precisely the wrong time of day/year and with a very bright sun shining through, it was impossible to make out any detail whatsoever,  I was a little disappointed but could at least see the funny side. 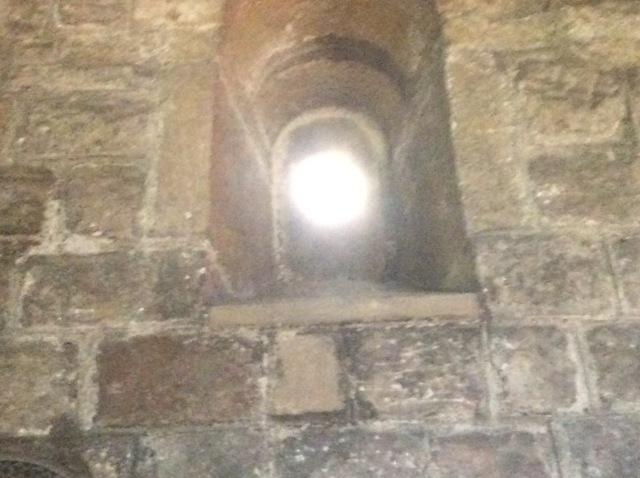 Anyway, a quick delve on the internet shows exactly how the window looks like when it isn’t the hottest, driest and sunniest summer in over 40 years.

You might be wondering what exactly the ancient craftsmen of aeons ago were hoping to tell the world with their newly invented stained glass window.  Well the truth is these are  fragments of an ancient stained glass window that was long since destroyed with various parts of it being uncovered by archealogist Professor Rosemary Cramp in the 1973 and put together into this random mosaic.

I am a writer and traveller with a penchant for history and getting off the beaten track. With several books to my name including a #1 seller, I also write environmental, travel and history articles for magazines as well as freelance work. Recently I've appeared on BBC Radio and Bloomberg TV and am waiting on the filming of a ghost story on British TV. I run my own private UK tours company (Ye Olde England Tours) with small, private and totally customisable guided tours run by myself!
View all posts by Stephen Liddell →
This entry was posted in history, Northumberland and Durham, Travel and tagged #WPLongform, church, Faith, Long reads, Monastery, northumbria, St Paul's Monastery, Stained Glass Window, Venerable Bede. Bookmark the permalink.