The mysterious Lud Church and the Green Knight

Lud Church isn’t even a church at all but actually a hard to find crevice in the Staffordshire countryside on the south-west fringes of the Peak District.  A narrow canyon in the ground over over 100 metres (328.1 ft) long and 18 metres (59.1 ft) deep.  It’s a foreboding place and long has it been this way with its steep and jagged rock faces covered with moss and lichen, always much cooler than the open countryside and seemingly whatever the weather, always the sounds of dripping water can be heard. 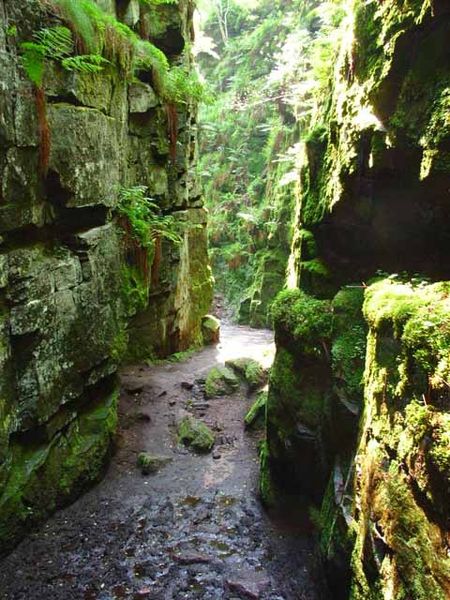 The church does have an association with Christians when in the 15th century a group of reformers led by John Wycliffe met here in secret to escape persecution.  It’s history goes back much further than that however and originally, maybe as long ago as 10,000 years ago, it was thought to be the home of the Devil and even today it takes a strong soul to stay out after dusk.

Several famous figures have sought refuge in the church which is so hard to find that modern day hikers can often miss it entirely and more than one horse-rider has met their death by falling down from the earth’s surface above. 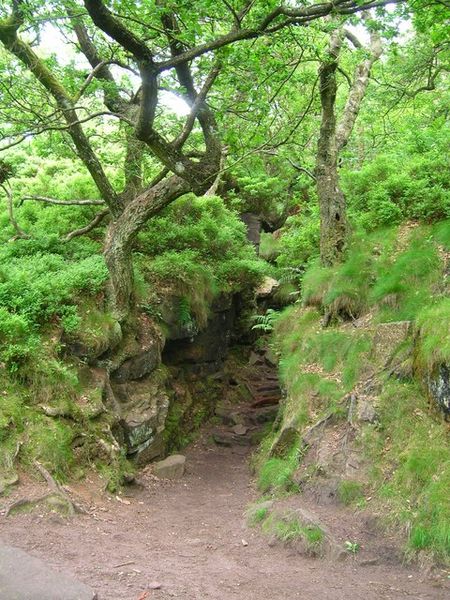 Entrance to Lud’s Chuch, Photo thanks to geograph.org.uk

Bonny Prince Charlie once hid here as did Robin Hood and Friar Tuck to name but a few.  Lud’s Church is famously thought to be the home of the the Green Chapel in one of the famous tales of King Arthur.

In the tale of Sir Gawain and the Green Knight, the stranger challenges the men of King Arthur’s round table to take a swing at him with their axe, so long as one year later the Green Knight is allowed to return the favour.

Sir Gawain took up the challenge and decapitated the Green Knight with one blow.  To his surprise, the knight picked up his head before reminding him of his promise that next year, it would be his head that would be struck by an axe.   Sir Gawain spends a year overcoming challenges to his chivalry and his pride before facing the Green Knight and only suffering a minor wound.

There is great significance in the story as Green in medieval England has many traditional meanings including youth, life and virility.  Sometimes the Green Knight is depicted as being the Devil, and sometimes as God or a Holy Spirit.  Sir Gawain’s shield is portrayed with a pentacle on it, the famous sign of the Devil.

Many believe that the story is not just an example of King Arthur’s strongest knight displaying the good and points of humanity but a moral point of the greatest of men being overly prideful  and confident in their own abilities.

Can you see the remains of the Green Knight in profile to the bright background?

I am a writer and traveller with a penchant for history and getting off the beaten track. With several books to my name including a #1 seller, I also write environmental, travel and history articles for magazines as well as freelance work. Recently I've appeared on BBC Radio and Bloomberg TV and am waiting on the filming of a ghost story on British TV. I run my own private UK tours company (Ye Olde England Tours) with small, private and totally customisable guided tours run by myself!
View all posts by Stephen Liddell →
This entry was posted in Architecture, Heritage, history, Religion and Faith and tagged church, history, King Arthur, Lud's Church, Myths, outdoors, Robin Hood, Sir Gawain, Staffordshire, The Green Chapel, The Green Knight. Bookmark the permalink.

8 Responses to The mysterious Lud Church and the Green Knight