A close look at a grave of a Pirate or is it?

Posted on November 4, 2019 by Stephen Liddell

Huddled on the the battered coast of Northumberland you’ll come across many an ancient ruin, castle or church.  There is more than enough to spend an hour or so at St Aidan, so named after the saint who died on the spot in 651AD.

I first visited this church around 40 years ago and still remember that time very clearly and mostly it was for one reason.  Nested between the church and the footpath and in plain sight is the grave of a pirate; obviously something hugely exciting for a 3  or 4 year old boy. 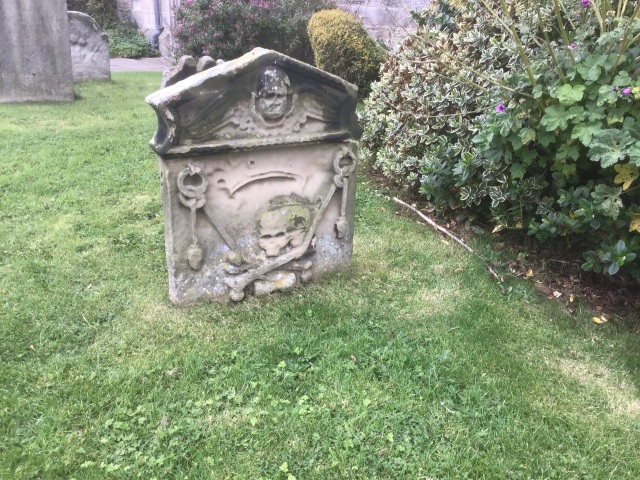 As you can see the head stone has all the hallmarks of a pirate.  It has a very prominent skull and cross bones and there is what looks like a sword of the variety popularly assumed to be used by pirates and various other unusual paraphernalia.

Could it be a pirate?  It’s certainly possible and the gold earrings that pirates wore were in the hope that if they died in some foreign land, the locals would take pity on them and use the gold earring to pay for a simple Christian burial… despite their criminal activities.

Though the church is just a minutes walk from a beautiful sandy bay as well as some very treacherous rocky waters there is another possibility in that the grave might belong to that of an unfortunate Scot.

Scotland is less than 20 miles away and after the reformation, such macabre symbolism was quite popular in some parts of Scotland as the the traditional cross was seen as unduly Papist which was obviously a terrible crime!

Additionally if it were a pirate, it is slightly bizarre that they were buried in such a high profile spot almost next to the church doorway that everyone would walk past rather than in a quiet corner.

What do you think?  Either, way it’s a great gravestone to study and its far from the only sight to see in St Aidans churchyard.

Across the churchyard you can also visit the impressive tomb of Victorian heroine Grace Darling who lost her life after her famed venture to save the lives of sailors in treacherous seas.

You can visit St Aidan’s, Bamburgh Castle and lots of other amazing places with Ye Olde England Tour and our tour Magical Northumbria – Castles, Conquest and Cathedrals

I am a writer and traveller with a penchant for history and getting off the beaten track. With several books to my name including a #1 seller, I also write environmental, travel and history articles for magazines as well as freelance work. Recently I've appeared on BBC Radio and Bloomberg TV and am waiting on the filming of a ghost story on British TV. I run my own private UK tours company (Ye Olde England Tours) with small, private and totally customisable guided tours run by myself!
View all posts by Stephen Liddell →
This entry was posted in history, Northumberland and Durham, Religion and Faith, Travel, Ye Olde England Tours and tagged Bamburgh, Cemetery, church, Grace Darling, Northumberland, Pirate Grave, Pirates, St Aidans Church. Bookmark the permalink.