Can anyone believe that I have written Halloween (related posts for 7 years now.  When I started this blog I thought I’d be lucky to still be going in a month.   As with everything else, I always try to keep my Halloween posts grounded as I think that makes them more realistic and also more scary.

This year is going to be relatively tame as I’ve posted quite a few true-life gory events in the last year or so but it is still hopefully an interesting theme, that of Corpse Roads.  Sometimes they have variations such as Coffin way or Church fields but the connotations are the same.

In days gone by, remote communities often had nowhere nearby to put their dead as only churches were sanctioned for burials in most situations (not so plague pits or criminals).  However in the countryside hamlets and smaller villages could be 10-15 miles from the nearest churchyards but they could be miles away from the smaller villages. Corpse roads, burial roads, funeral roads, or lych ways offered a dedicated means for the dead to be taken to consecrated grounds. 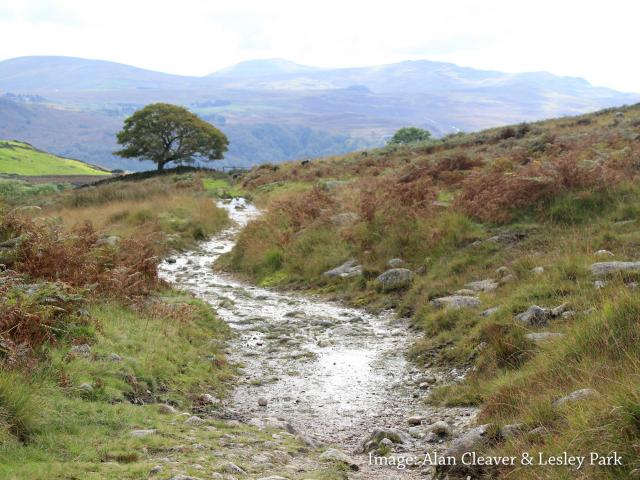 The Old Corpse Road from Wasdale in the Lake District.

A lot of the old corpse roads now only exist as footpaths. For the latter, few remember or know their original purpose.   Obviously most landholders didn’t particularly want distressed families and friends traipsing rotting bodies across their lands and so such Corpse Roads were deliberately given remote and barren routes which were far off the beaten track even in centuries past, let alone with the spread of motorised transport in the 20th Century.

There was also a popular belief that should three funeral corteges pass over a route then it automatically becomes a public right of way which would also be something many landowners would try to avoid.

Things became obviously incredibly difficult during a snowy winter or wet period and there are stories of coffin bearers mired in mud and mourners wading through bogs. It must have made the loss of a family member even more painful, unless it helped to take your mind off things. It certainly means that coffin roads go through some of the most desolate and remote parts of our fells, giving them an atmosphere appropriate to their role.

Corpse Roads began to decline when even the poor were able to afford rudimentary hearses and when much common land was fenced off during the Enclosure Acts which made using some of them difficult on a practical basis.

Back in times when people were much more superstitious,  people believed spirits only travelled in straight lines. Not wanting to be haunted by aggrieved ghosts it was thought that one way to stop ghosts returning to their home involved taking a meandering route to the graveyard through the countryside rather than a more direct and easy route. This may have its roots in prehistoric times when Neolithic earthen avenues called cursuses link burial mounds: these features can run for considerable distances, even miles, and are largely straight, or straight in segments, connecting funerary sites, there is even one just outside Stonehenge. 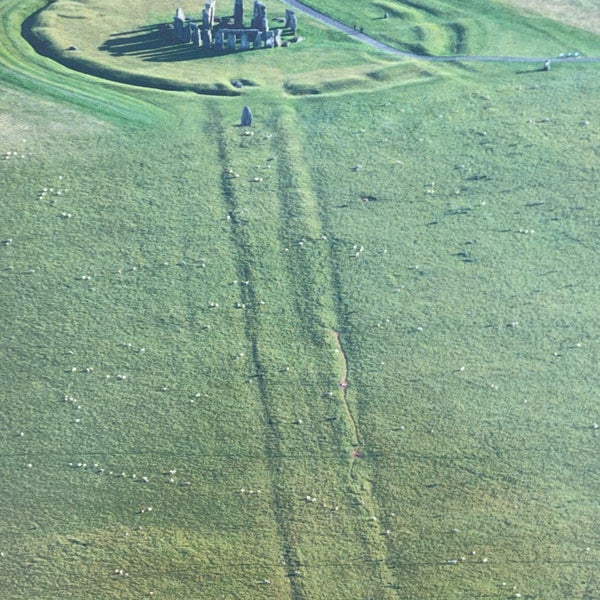 A neolithic cursus leading to Stonehenge

In some areas such as Wales, there would be the corpse candle with people believing it travels along the route from the cemetery to the dying person’s house and back again. Seen as an omen, the lights allegedly appeared on the night before a death when the spirit traced the path to the cemetery in advance.

Not to be confused with other non-earthly spirits such as the Will-o-the Wisp that would try and lead travellers astray and often to their demise into marshes and bogs with even some scientific belief that they could be due to decomposing methane apparently.,

Corpse lights have been a very common occurrence and they would sometimes be seen to flicker around the home and eventual burial sight of the unfortunate person nearing the end of their life though at least one 19th century researcher in Sussex believe the lights were likely to be glowworms.

Most isolated and remote parts of Britain and their Corpse Roads and many had local traditions, around the bleak moors of Cornwall and Devon in the SW mourners would carry the corpses feet first, so they pointed away from their home. Sometimes the road would cross bridges or stepping stones, since spirits couldn’t cross running water. In fact everywhere in Britain a great deal of effort went into making sure the dead didn’t come back to haunt the living unlike in other places.

Interestingly some of the corpse roads featured coffin stones to allow mourners to set the coffin down on while they rested. With the coffin never touching the ground, everyone could be assured that the spirit of the deceased wouldn’t wander off!   You can still see some of these around the countryside though knowing what they are is another matter.  Some can be simple stones and others something all the more elaborate.

Lamplugh in Cumbria is one such location to boast a coffin rest, also known as a corpse cross. It’s near the church and gave pallbearers somewhere to put the coffin while they caught their breath. 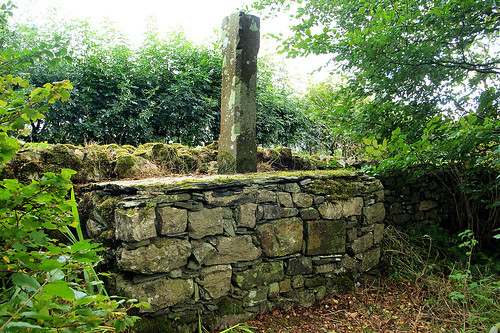 A coffin rest in Lamplugh, Cumbria not far from where I was born.

Times being as tough as they were and so many being impoverished, it was common that the family and friends couldn’t afford a coffin in which case you could actually borrow a public coffin for most of the journey with the person being enclosed in a sack or cloth.  When you had finished with the coffin, you’d take it back to the pickup point at the churchyard like the coffin rest below. 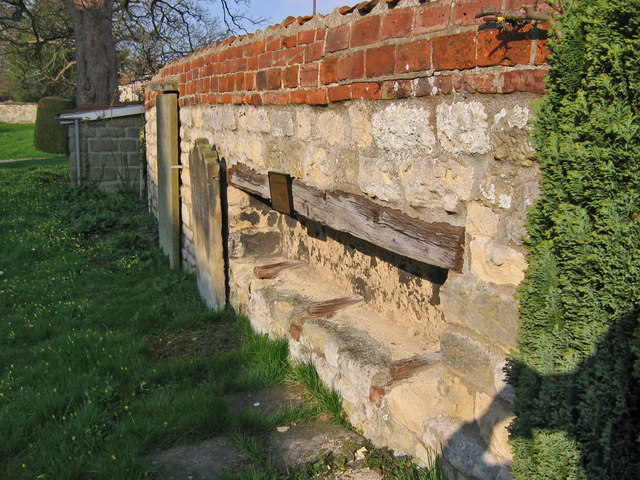 It wouldn’t be Halloween without a ghost story so how about this one from the old Wasdale Head to Eskdale Corpse Road whose family made the mistake of using a horse rather than carrying the deceased by hand.  A young man had died and his body was being taken from Wasdale Head to Eskdale on the remote corpse road over Burnmoor. It was a misty winter’s day and some way into the journey the horse took fright and bolted. The party of mourners searched for hours but the horse and its grisly cargo had vanished.

Returning home in absolute despair having first lost only son and then his body, collapsed and died. During her own funeral procession, on the same path and at the same place, her horse too took fright and ran off into a snowstorm. In the desperate search that ensued the son’s horse and corpse were discovered but the mother’s had disappeared for good. From time to time, a ghostly horse and coffin appear on this lonely fell path to no doubt scare the living daylights out of intrepid hikers. 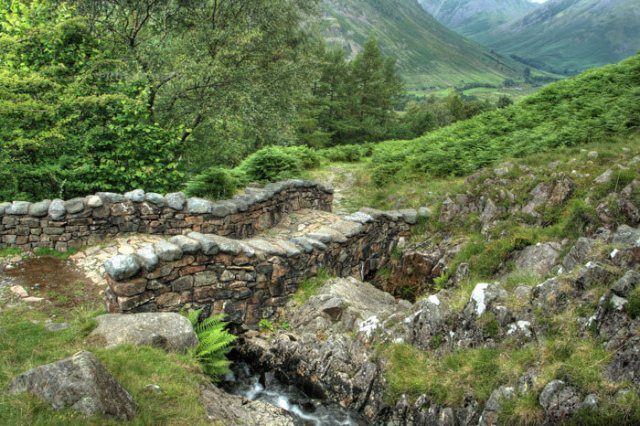 The double-backed bridge on the corpse road from Wasdale to Eskdale, Lake District, (photograph by Alan Cleaver)

I am a writer and traveller with a penchant for history and getting off the beaten track. With several books to my name including a #1 seller, I also write environmental, travel and history articles for magazines as well as freelance work. Recently I've appeared on BBC Radio and Bloomberg TV and am waiting on the filming of a ghost story on British TV. I run my own private UK tours company (Ye Olde England Tours) with small, private and totally customisable guided tours run by myself!
View all posts by Stephen Liddell →
This entry was posted in Cumbria & The Lake District, history, Life, Religion and Faith and tagged Corpse Road, Death, Funeral, halloween, outdoors, Stonehenge, Superstition, walks. Bookmark the permalink.

7 Responses to An eerie journey along old Corpse Roads