The Hartley Colliery Disaster of 1862

Posted on September 9, 2019 by Stephen Liddell

My blog is full of disasters from beer floods in London to Grace Darling – A Victorian Heroine. burning building self-sacrifices  to heroic against the odd tales of survival I Am The Army – The Incredible Story of William Brydon

Many of them remain well known or at least just buried beneath the surface of public consciousness but not so with the case of the Hartley Colliery Disaster of 1862, one of those epic Victorian disasters to hit the most innocent and yet some how shape the world for the better.

If there is one thing that made Britain the industrial powerhouse which it became, then that is coal.  Coal is almost everywhere in Britain, Scotland, Wales, Yorkshire, the midlands, Kent.  But nowhere is more steeped in coal mining and heavy industry than Newcastle and the surrounding counties of Northumberland and County Durham.  There remains centuries of coal left even today, after it has been abandoned in leu of apparently safer, cheaper and cleaner energy.

Back then however, almost every man and boy of anything like working age would spend almost his entire life down the pit.  It was intensely dangerous and physical work and death was only ever a moment away.

The Hartley Colliery Disaster of 1862 was worst than most and the impact of the disaster  changed of law, spelling the end of one-shaft mines, and the beginning of more support for miners’ families.

The disaster in 1862 began when a beam supporting the steam engine which was used to pump sea water from the Hester pit broke, crashing down and blocking the single mineshaft.  (You can see my visit to an abandoned nearby mineshaft at Fell walking and an abandoned mine) or the new video I uploaded below.

Five men, who were in the lift coming up at the end of a shift, were killed instantly. Three others survived.

In common with many 19th Century coalmines the Hester pit had only one shaft. With this blocked, 199 men – almost double the normal numbers, as the accident happened during a shift changeover – were left trapped underground.

A massive rescue operation began and workers from neighbouring mines came to help, but it proved more difficult than anticipated to reach the trapped men.  Progress was further delayed by the discovery of poisonous fumes, and it was six days before a passage could be cleared, by which time they were all dead. 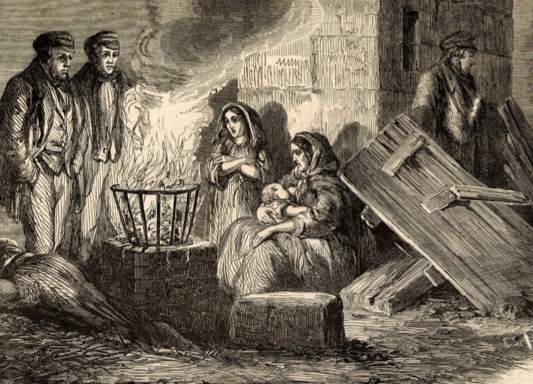 Unfortunate families brave the freezing Northumbrian winter for news on the miners.

Hardly anyone in the close-knit community was unaffected, with some families losing two generations of their menfolk.  Reports of the tragedy had appeared in the newspapers, attracting national attention.

Unknown at the time, the men and boys were able to move to a higher seam to escape the imminent danger of flooding but the destruction of the shaft and cage meant that the only means of ventilation and escape from the build up of noxious gases had been destroyed. 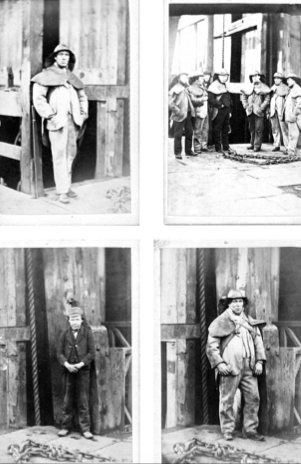 Some of the rescuers.

Above ground men worked frantically to reach the entombed miners but the breakthrough would not come until the following Wednesday.

Sadly, long before that point, the men below had succumbed to the gas. The last diary entry of one of the deceased occurred on the Friday and this suggests that it may have been on that day that most of the men had met their end.

The bodies sat in two rows, all as if they were simply sleeping. One boy’s head rested on the shoulder of his father, while two brothers embraced in a permanent affectionate slumber. A miner involved in the attempted rescue effort was the first to encounter this scene. He climbed back to the surface and with great emotion announced the dreadful news to the waiting families and crowds above. There were no survivors below. 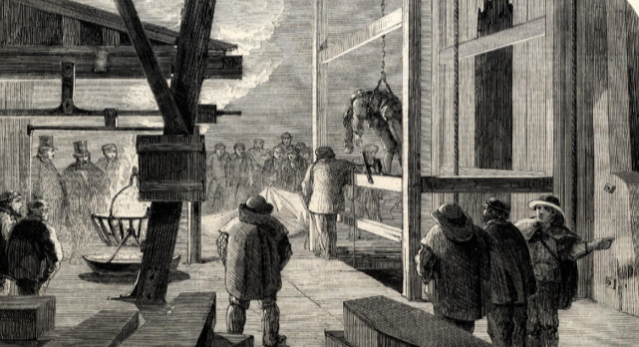 Lifeless bodies are hoisted up, one by one.

Queen Victoria, herself in mourning after Prince Albert’s recent death, sent a message of condolence and offered her “tenderest sympathy” to the widows and mothers of the dead, with her “own misery” making her feel the more for them.

Public attention also led to a successful campaign to make two shafts compulsory at mines, and despite opposition from some mine owners, an Act of Parliament was passed in August 1862.

Most of the dead were buried in the nearest cemetery, four miles away in Earsdon, with the Duke of Northumberland releasing additional land as the existing church grounds were too small. 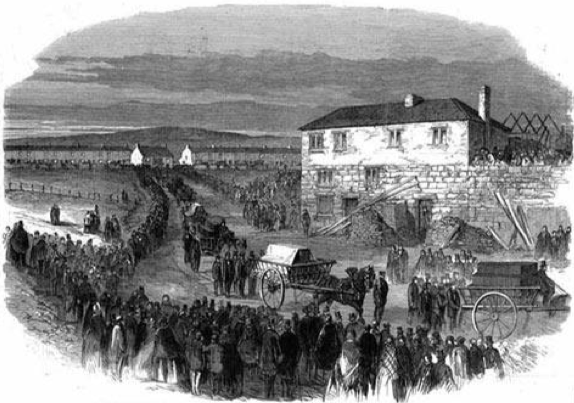 The Reverend Andrew France, current vicar of St Alban’s Church said to the BBC in 2012 that : “At the time the devastation was felt all around this area, but I don’t think there’s still a scar here. It was such a long time ago.  I will say something about the people round here, though, they all know about the Hartley pit disaster. They also realise that it had a positive impact. Although it was absolutely tragic that all those people died, out of that tragedy came mining legislation.  It meant that never again would a mine be allowed to have a single shaft, there must be two ways in and two ways out. That really is its legacy, it meant that those people did not die in vain.”

Inscribed on the obelisk in Earsdon churchyard are the names of the 204 men and boys who died in the Hartley Colliery disaster on 16 January 1862.

The youngest was 10, the eldest 71, and the same surnames are repeated time and time again. One family, no doubt in some way related to my own, the Liddles, lost nine members. 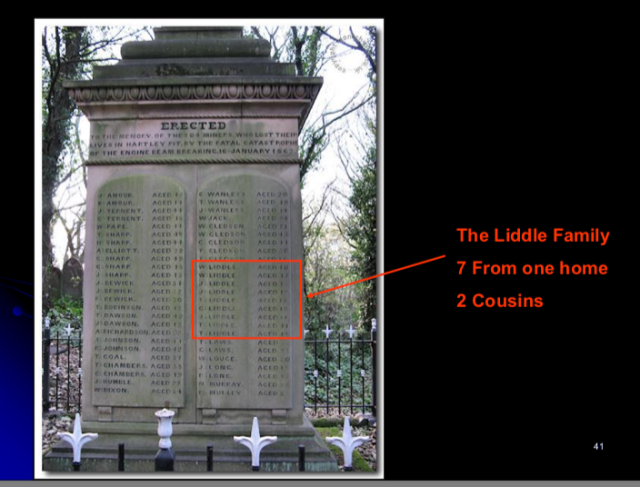 If you’d like to read of a Liddell who died a hero in another underground tragedy then check out my recent post A grisly end for a brave Liddell at St. Botolph’s… Aldgate (Whitechapel).

I am a writer and traveller with a penchant for history and getting off the beaten track. With several books to my name including several #1 sellers. I also write environmental, travel and history articles for magazines as well as freelance work. I run my private tours company with one tour stated by the leading travel website as being with the #1 authentic London Experience. Recently I've appeared on BBC Radio and Bloomberg TV and am waiting on the filming of a ghost story on British TV. I run my own private UK tours company (Ye Olde England Tours) with small, private and totally customisable guided tours run by myself!
View all posts by Stephen Liddell →
This entry was posted in Heritage, history, Life, Northumberland and Durham and tagged Coal Mine, Death, Hartley Colliery Disaster, Hester Pit disaster, Northumberland, Victorian, Video. Bookmark the permalink.

6 Responses to The Hartley Colliery Disaster of 1862