Posted on December 6, 2015 by Stephen Liddell

I’m not really into the modern Christmas, I’m much more into the original meaning of Christmas.  However that’s not to say I’m not interested in the traditions of Father Christmas it’s just that I am into the more original meanings of  it rather than the money and over indulgence of this biggest of HOLY(i)days.

Many people assume that Father Christmas and Santa Claus are one and the same person depending where in the world you come from.  Much of Europe has its own related version of the British Father Christmas known under names such as Papa Noel.  Whilst today their identity have almost merged together, originally however they had very different identities.

The American Santa can be traced back directly to Dutch settlers and their tales of Sinter Klass which is Dutch for Saint Nicholas.   Saint Nicholas was once the Bishop of Myra in Turkey during the 3rd century AD and he was known to be both very kind to children but also very shy.  It is said that one day to avoid meeting a child in person, he dropped a gold coin down a chimney which landed in a young girls stocking. 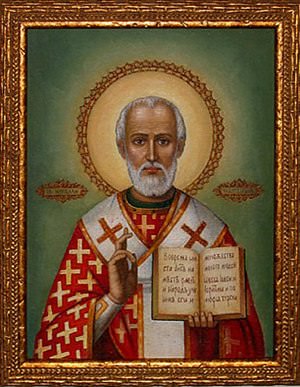 The first use of the word Santa in North America dates back to the 1770’s when the term was used in a slightly mocking manner towards Dutch settlers.  His first portrayals ditched the red gowns of a Bishop and instead  illustrated him as a portly old Dutch sailor.

The story of Saint Nicholas had spread throughout Europe very quickly though didn’t reach the British Isles until 1066.   Pagan Britain may not have had Bishops but its people still sported a long and kindly tradition.

The first appearance of Father Christmas occurred during the ancient British mid-winter festivals. The winters were long, cold and dark and his origins are that of a pagan figure who represented the coming of spring. Traditionally Father Christmas  would wear a long, green hooded cloak and a wreath of holly, ivy or mistletoe. It is the association with holly and mistletoe, and his ability to lift people’s spirits, that we retain from this ancient Father Christmas.

During the fifth and then sixth centuries, the islands fell under the control of the Saxons from mainland northern Europe and Father Christmas began to take on the traditions of King Winter or as he was sometimes known as King Frost and Father Time.    He would be invited into the homes of people and sat near the fire where he would be given food and drink, rather like the trend of leaving out a mince pie and alcoholic drink out for Father Christmas today… and carrots for the reindeers if you are in my house.

The idea behind it was that by being kind and generous to King Winter or Father Christmas, then the hosts would be rewarded in return by perhaps a milder winter or early spring which in those days were vital to the survival of people and animals alike.  This is likely where the idea that Father Christmas delivers gifts and glad tidings originates from.

Later still when the British Isles were invaded by the Vikings, the land was also introduced to their own midwinter traditions.   The Norse god Odin was known to visit Earth between the 20th and 31st December under the persona of Jul during the season of Jultid which we now know as Yuletide.

Odin was known to be an elderly old man of a god with a long white beard and large belly.  He wore a hooded cloak and travelled the world on his horse Sleipnir which had eight legs and rewarded with gifts those who had behaved well and punished those who were bad.

The British Father Christmas merged with these Viking traditions so that he could travel incredibly fast and deliver presents to those he magically knew had been good. 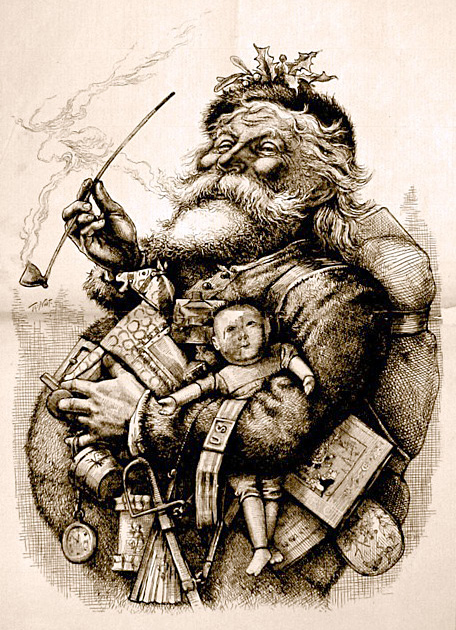 One of the first depictions of Father Christmas

With the Norman invasion of 1066 Britain was finally exposed to the southern European tradition of Saint Nicholas and over the next 500 years he became increasingly synonymous with Christmas good spirit and kindliness.   In the 15th and 16th centuries country houses would invite Captain Christmas into their houses for a party and festivities and in 1638 we finally get to see the first drawing of Father Christmas and with the Saints Day of Nicholas in early December no longer observed in England, it was moved to Christmas Day itself.

It had reached the stage where all this enjoyment and pagan like festivities were beginning to overshadow the real meaning of a religious Christian Christmas and so the Islamic fundamentalists of their day, The Puritans, outlawed Father Christmas and it is said for a while even Christmas itself.

However then as now, it is almost impossible to ban something that is popular with so many people and Father Christmas continued in secret and private as well as being displayed and written about in the odd underground publication.

As with so many things Christmas related, it was the Victorians who brought Father Christmas back to the mainstream and they were not afraid to mix the traditional Christian Christmas with the in Britain at least, older traditions of Father Christmas.   He was still extremely happy and wearing a pagan hooded fur lined coat which was usually red, blue, green or brown.

The 20th Century saw Father Christmas influenced just one last time with the American Santa.   He was always dressed in red and white, a fact sometimes wrongly ascribed to a Coca-Cola advertising campaign which perhaps may have popularised such an appearance but both Father Christmas and Santa had been seen in red and white before as obviously Saint Nicholas wore such colours on his robes.

Whilst Father Christmas and Santa both are now very similar and often used interchangeably and both have influenced the character and traditions of the other there are still some differences.

Father Christmas lives in Lapland in the far north of Norway/Sweden and Finland depending on tradition which is lucky for him.  Santa of course famously lives at the North Pole and may have problems with Global Warming but then if that happens then indeed we will all have been bad little boys and girls and probably don’t deserve any presents.

Both characters are now overwhelmingly connected to present giving though there is still something of a deeper meaning of Father Christmas with its pagan and still slightly less commercial feeling and it is becoming increasingly popular to see Father Christmas once more dressed in green on cards and Christmas tree models and ornaments.

For something altogether more scary, you might like to check out my short Christmas horror story, The Silence Fell inspired by the Weeping Angels of Dr. Who.

Due to the relatively short word-length it is only available on electronic formats  at just 99cents / 99pence I hope it will be a great introduction to some of my other novels too.   You can take a look at The Silence Fell  is available at Amazon.com and Amazon.co.uk.  My books are also available direct from  Barnes and Noble, Kobo, Smashwords and Createspace.  You can see my Amazon bookstore for the UK and US here and for Apple fans you can purchase direct from the iTunes/Ibooks store. 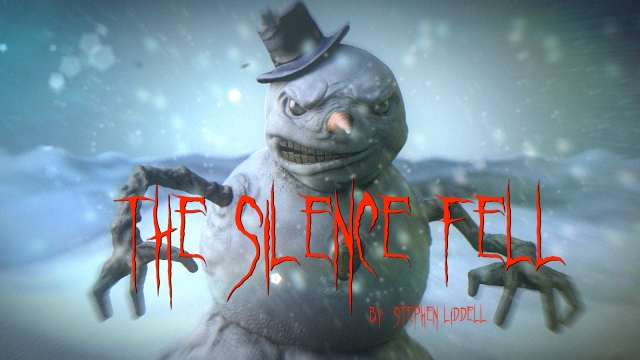 I am a writer and traveller with a penchant for history and getting off the beaten track. With several books to my name including a #1 seller, I also write environmental, travel and history articles for magazines as well as freelance work. Recently I've appeared on BBC Radio and Bloomberg TV and am waiting on the filming of a ghost story on British TV. I run my own private UK tours company (Ye Olde England Tours) with small, private and totally customisable guided tours run by myself!
View all posts by Stephen Liddell →
This entry was posted in history, Religion and Faith and tagged Christian, Christmas, Faith, Father Christmas, history, Lapland, Life, Pagan, religion, Saint Nicholas, Santa, Vikings, winter. Bookmark the permalink.

3 Responses to The history of Father Christmas & Santa Claus