Ghosts of Christmas Past

Firstly, apologies for the small break from blogging for the last week or so but I’ve been unwell with an asthma related chest infection that I seem to get whenever anyone else might suffer from a cold so I’ve been unable to do much more than breathe rather erratically on the edge of a chair for the last few days!

I have have always loved Christmas for lots of reasons.  I know many people don’t celebrate Christmas and for those that do many use it just as an excuse to eat and drink too much or complain about the costs of buying presents or being forced to spend a special day with people that they don’t really want to.

A snowy walk to a church or hours spent in traffic, battling crowds for junk on sale you can’t afford and don’t need?

I’ve always taken the view that Christmas is a special time of year, especially if you spend most of the year studying or working hard.  To me one of the joys of Christmas is the chance to do almost nothing at all.  What a pleasure it is too.  Just to rest and spend time with my wife and some friends.

Undoubtedly Christmas is overly commercialised these days for many but only if you let it be that way.  We bought most of our presents around September and October and always have done so.  I can’t remember ever being stuck in the crowds or having spent too much money, mainly because that all sounds awful but also because these days, most people have everything they could possibly or realistically want and if I make do with a 10 year old yellow screen mobile phone then I’m certainly not going to buy an iPhone for a 5 year old.

If all this sounds a bit bah-humbug, it isn’t meant to be.  I love having our Christmas tree and lights on, it’s dark from about 3pm anyway and on cloudy days never really brightens up at all.  I love spending time with my wife, that’s why we got married but normal life means we only get to see each other for an hour or two a day but for the next week we have it 24/7 and with no pressure to go on holidays or do anything we don’t want.  After being married for 6 years, spending a week with my wife is still heaven and the best gift possible. Yes I do count myself as very lucky.

I love Christmas presents, I don’t generally buy stuff through the year and am treating myself to a gadget I have been waiting for about 5 years and you can bet I will love it and will still love it next Christmas when it has been superseded. I’ve always enjoyed buying presents for people much more than receiving them.

In Britain the whole country pretty much comes to a halt from the evening of the 23rd December until January 2nd or 3rd (unless you’re one of those shopping addicts that has to go and spend their money in the New Year Sales (sorry, these days it has moved forward to the 26th December ie Boxing Day Sales).    I really don’t understand people who spend weeks shopping for one day and then the first thing they do is rush out and spend more at the shops before complaining they hate Christmas.  It doesn’t sound like Christmas to me and aside from the shops everywhere is quiet which is why my wife and I often do some of our best if coldest walks of the year.

What foods, Brits expect on their Christmas Dinner plate. We will swap yuccky sprouts for Yorkshire Puddings and also Bread Sauce!

Lots of fresh air and exercise and lots of nice home-cooked food when we get back.    Really if you don’t drink a lot and you don’t have chocolates then Christmas is a healthy time of year.  Roast Turkey, roast vegetables and other traditional foods with hardly any sugar or fats at all.

One thing that aids having a cheap and enjoyable Christmas here is that the best TV shows of the year are often to be had.  It’s quite possible to never get off the sofa between now and January.  Whether its something like Doctor Who, Downton Abbey, the latest movie, black and white classics or more obscure travel or religious documentaries.  I clear my cable box and record about 60 hours or shows in addition to the many more we watch and those shows give us something good to watch often until the summer.

Normally Christmas for me begins with the Carol Singing from Kings College Chapel in Cambridge on Christmas Eve.   Religion has always been an important part of Christmas and without it then really Christmas is just any other holiday.  We already have a pointless celebration, New Years which is something I never celebrate.    I don’t always get to go to Church at Christmas though as normally I have a bad chest or if I don’t exposure to the cold night air can make it bad.  However, I watch the televised services and that is what I think about in my heart rather than Father Christmas, as marvellous as he and Rudolph can be.  It doesn’t matter if it is a Protestant service from Canterbury or a a Catholic one from The Vatican.  Christmas is Christmas.

Where it all began, Manger Square in Bethlehem

I used to look forward to Christmas for months.  I hated my job so much, my friend and I would count down the days and weeks from the end of our Summer holidays.  Just the prospect of not being there for a few days meant everything to us.  Now, no longer being in work I have been able to enjoy the autumn properly and hopefully it will mean I won’t be dreading going back to work half way through the week.

Christmas week is all the more special to me as it is my birthday on December 28th.  So all my celebrations are in one week.  Come January 2nd, there isn’t really anything much to look forward to for a looooong time.

This Christmas though is different.  No longer being in paid employment brings a new perspective for both good and bad.  Christmas is a time for thinking, praying and helping others though it is something I try to do throughout the year.  Still year in, year out there are always people suffering a miserable Christmas.  Whether it is from earthquakes or wars in distant parts of the world or floods and storms closer to home (we have a big storm right overhead right this minute) or simply people who aren’t able to celebrate Christmas either due to fear of persecution or attack. 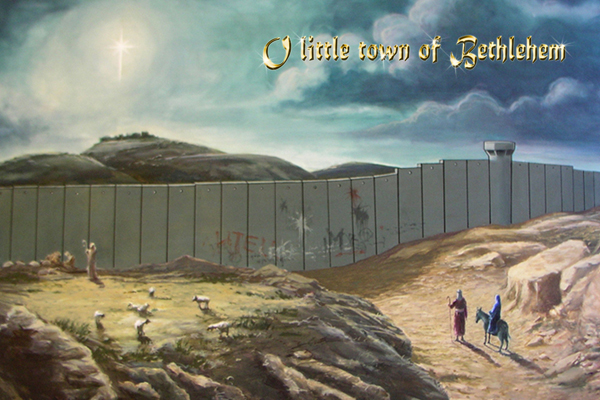 Though many have now left, there are still Palestinian Christians behind the barrier in Bethlehem

This year though will be a bit different because as self-indulgent as it may seem, I am going to count myself amongst those having a less than stellar Christmas.  For anyone who has been following my blog for 9 months you’ll remember that my mother died unexpectedly in March and like everything else but especially for this week Christmas and birthday won’t be the same for countless obvious reasons.

I never once had an argument with my mother (in fact I can only think of 1 or 2 I have had with anyone in my whole life) and hearing of some people complaining about their relations has always been a bit bizarre to me.   Christmas should be a time to spend time with those you value most and for me one of the very most important people won’t be there.  To hear people of all ages complain but especially those who are older than my mother was be miserable about Christmas or their parents and family just sounds ungrateful.

We’re walking in the air…

I always knew Christmas this year would be tinged with sadness and it has already begun.  Normally every year we watch “The Snowman“.  If you haven’t seen it, you really should if only for the magical flying sequence accompanied by a a chorister singing “Walking in the air“.  It’s about a boy who wakes up one morning to find out it has snowed a lot.  He makes a snowman which comes to life and they have 24 hours of the most amazing fun and adventure but the next day the boy wakes up and the snowman is melted.  The short film ends with the boy running into his garden, hunched up in despair clutching the hat and scarf of his friend who is no more and is only left with his memories.  There aren’t many cartoons that have such a sad ending except perhaps Watership Down.

Anyway to me at this Christmas, I rather feel like the boy whose snow man has melted.

I miss you Mama xx

I love you with all my heart Mama and always will.

Whatever you do, if you are lucky enough to be able to celebrate Christmas then enjoy it, spend it with people you like and be happy, you have another 51 weeks to complain and go shopping!   Merry Christmas to all my readers and a Holy Christmas too.

I am a writer and traveller with a penchant for history and getting off the beaten track. With several books to my name including a #1 seller, I also write environmental, travel and history articles for magazines as well as freelance work. Recently I've appeared on BBC Radio and Bloomberg TV and am waiting on the filming of a ghost story on British TV. I run my own private UK tours company (Ye Olde England Tours) with small, private and totally customisable guided tours run by myself!
View all posts by Stephen Liddell →
This entry was posted in Life and tagged bereavement, Culture, Dinner, Faith, Jesus, Life, Mama, Merry Christmas, shopping, The Snowman. Bookmark the permalink.

11 Responses to Ghosts of Christmas Past