One of the things I love doing is studying maps; old and new. Having moved back to just one street away from where I spent my teenage years I’m now able to use the internet to piece together answers to questions that have been bugging me for much of my life but which no-one else seemed to even ask, let alone care to know the answers too.

A few months ago I wrote on the now restored infamous  The Restoration of the Aldgate Pump of Death!  in the East End of London which killed thousands and left us with the saying about ‘having the hump’.  It turns out I have a similar though less spectacular site just 2 minutes walk from my new home.

You may have seen some of my recent posts exploring woodlands and countryside just a few minutes walk from my Georgian terrace house or cottage as I grandiosely call it.   I’ve mentioned before how until just over 200 years ago this area was mostly uninhabited as part of an enclosure and the preserve of highway men, criminals and rogues and how even today it stands right on the border of London and Hertfordshire in a state of an urban village.

Dury and Andrews Map of 1766, showing Bushey, Bushey Heath and The Windmill.

You can see in the old map above that the place where I live in Bushey Heath is entirely blank and obviously a no-go area.   Towards the south is Thieves Hole, a reputed hideout of highwaymen and criminals.     The elements of the much older and larger village of Bushey to the north are all in place with many of the smaller settlements now being incorporated as part of the village of Bushey. 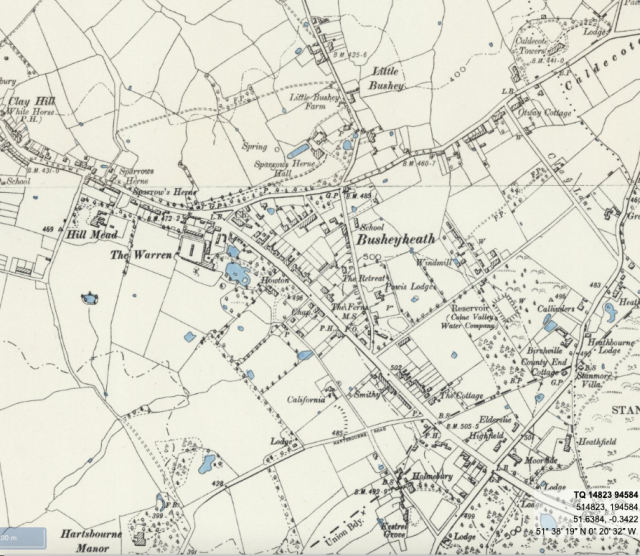 Jump forward 70 years and the enclosure of Bushey Heath is opened to development.  It was originally envisioned it would become an agricultural area but it being 500 feet up and relatively close to the new train-lines meant that instead it became a desirable place to live.

You can see in the later map, Bufhey Heath is now Bushey Heath whilst place names such as Clay Hill, Little Bushey and Sparrow’s Herne remain the same and Curry Cuts Hill has become Caldecote Hill.  I can actually se Caldecote Towers from my bedroom window but that’s for another post.

The map also gives an insight to what was important back then.  Chapels or churches, PH’s meaning Public Houses or Pubs as we call them today.  MS means milestone and you can still see these around and they would tell you how many miles you were from the nearest town or city in both directions. The Smithy would be where horseshoes were sorted out which interestingly is today where the village petrol station is.  The Warren would at one point have been a place related to breeding rabbits.

A house labelled California which gave its name to what is now California Lane and no doubt named in honour of the then new state.  You can also see various country houses, hall’s and lodges that give an idea how it was a place for ladies and gentleman.  Thieves Hole has now become gentrified into Hartsbourne Manor House and is today a golf and country club.

You can even see where my old cottage is right opposite the B in Bushey Heath and opposite the school.  Many of the surrounding fields are now houses but there are plenty still around just a little walk away and you can see the bottom right corner the common and forests that hold back London.   In fact if you look at the dashed line as it crosses the main road you can see B.S. which is the border stone I took a photo of a month or two ago at I’ve moved house!  with the photo below.

If you quickly look back at the 1880’s map and look closely at the central triangle of streets, just below the Sparrow’s Herne Hall you can see on the map a P.   P stands for pump and this pump was installed around 1850 when after 10 or 20 years, the residents of my street and the adjoining one must have got sick of traipsing to the nearest spring or well and created this.

As you can see I took the opportunity to stand in the middle of the coronavirus and traffic free road to take this photo. It’s of an authentic Victorian Water Pump.

This pump is the property of…

The pump was made by J. Tylor & Sons,Engineers, Warwick Lane, London and the stone plaque has an engraving but the bottom half is almost worn away.  Maybe one day I can do a brass rubbing of it but I figured that a lockdown isn’t the time!   I’ve also found out information that is incorrect.missing on the official council heritage site so it’s nice to see I know what I am talking about to some degree.

So it’s easy to see how throughout the 19th and first half of the 20th century things were developing at a rapid pace and it was one of those moments as with Aldgate at a similar time and perhaps even the Wuhan virus today in China when there was too many people living a generally modern way of life but still too dependent on the old and the water source here apparently saw the outbreak of Typhoid around 1870 which killed and made sick many in the fledging community.

Obviously this sort of thing couldn’t be allowed to go on when there were new technologies to make life easier and healthier/  With development continuing and the population growing, especially in the nearby industrial town of Watford, the village of Bushey Heath became a natural location to have a reservoir built and at 500 feet above sea-level it could provide great water pressure for everyone living down in the towns and valleys.   The Colne Valley Water Company was created in 1876 and as you can see from this 1924 photo, a large covered reservoir was built with this photo just showing a tiny section.

And you can see how the village turned out below.

I hope you enjoyed my little bit of local history and heritage.  It’s bizarre to think that 150 years ago people in my village and almost certainly in my own home would be either suffering from or scared of a deadly pandemic just as is the case in 2020.

I am a writer and traveller with a penchant for history and getting off the beaten track. With several books to my name including a #1 seller, I also write environmental, travel and history articles for magazines as well as freelance work. Recently I've appeared on BBC Radio and Bloomberg TV and am waiting on the filming of a ghost story on British TV. I run my own private UK tours company (Ye Olde England Tours) with small, private and totally customisable guided tours run by myself!
View all posts by Stephen Liddell →
This entry was posted in Heritage, history, Life and tagged Bushey Heath, Coronavirus, Coronavirus Diary, Covid19, Diary, Elstree Road Pump, Maps, Social Distancing, Typhoid. Bookmark the permalink.