Finally after 5 months of waiting, packing, terrible fake buyers and much more efficient serious buyers, I moved house on the 31st January.

It all went incredibly well and I was ever so glad to move out as I was beginning to think I never would.   I moved with 104 packing boxes and am now down to about 30 though perhaps the final 30 will be harder the first 74 given that I have no more obvious places to put belongings until some new furniture arrives.

My new house dates from around 1840-1850 I would think and is very solidly built and very cute and quaint I am sure to people from overseas; almost exactly what one might expect of a modest old house except perhaps for a smaller front garden and maybe a little smaller than many old houses.  This of course adds to the cuteness factor.

Not too much needs to be done to the house; I am having a new bathroom put in and I’m going to reverse what previous owners did and unblock the fireplace so I can have a real burning fire.  I never understand why with all the types of homes you can get in Britain, one would choose an old house and then block up the fireplace!  Aside from working on the garden and staircase and some minor decorating and electrics work, there isn’t too much work to be done.  With the exception of electricity, running water and things of that nature, the house retains its original features and quirks.

I currently don’t have a sofa or armchair but have ordered some; they won’t be arriving until April however. I’ve opted for an electrically reclining arm chair just incase Joey from Friends happens to be popping by.

The back garden is large and I can’t see any other houses from it.  The street is quiet and peaceful along with the neighbours and there are lots of woods and common land nearby and just as much history to explore from before Roman times up to the modern day.  I’m just over the border from London by a few hundred metres/yards and this spot is the highest in London, my home standing around 505 feet /154 metres above sea level.

Whilst out last week I took a photo of this border stone which marks the traditional border between the county of Hertfordshire and that of Middlesex which for all intents and purposes is now Greater London. 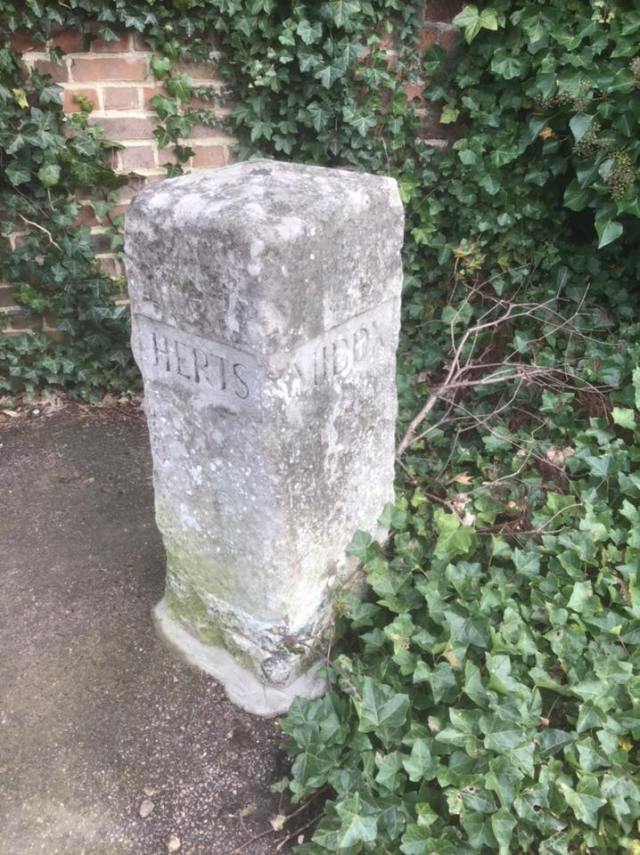 There is a nice village atmosphere with local pubs, restaurants, bakers, butchers and everything else one needs.  I can hear church bells from inside my house and just today had a quick drink in The Three Crowns where in the 1980’s George Michael and Andrew Ridgeley founded the mega-successful band Wham and in centuries past was a reputed haunt of the legendary highwayman Dick Turpin.

I am a writer and traveller with a penchant for history and getting off the beaten track. With several books to my name including a #1 seller, I also write environmental, travel and history articles for magazines as well as freelance work. Recently I've appeared on BBC Radio and Bloomberg TV and am waiting on the filming of a ghost story on British TV. I run my own private UK tours company (Ye Olde England Tours) with small, private and totally customisable guided tours run by myself!
View all posts by Stephen Liddell →
This entry was posted in Life and tagged Bushey Heath, Decorating, Dick Turpin, Life, Moving house, Wham!. Bookmark the permalink.