The history of 10 Downing Street and a peek behind its famous black door.

A few weeks ago I posted about a ‘fake’ Number 10 Downing Street and so I thought it would be timely to write about the actual Number 10 Downing Street especially as having written about historic and political situations for 6 years that not having yet done so is something of an aberration.  After all, there are few addresses that have influenced the world more.

In the Middle Ages, the ground underneath Downing Street and the Houses of Parliament was known as Thorney Island. It lay between two branches of the River Tyburn (which today flows directly under the Treasury in Parliament Street). The earliest known building on the site of Downing Street was the Axe brewery owned by the Abbey of Abingdon but by the early 16th Century it has fallen into disrepair.

Why is Downing Street called Downing Street?  It is named after Sir George Downing, who was born in Ireland and brought up in New England and was one of the earliest graduates of Harvard. He came to England during the Civil War and by 1650 had become Cromwell’s intelligence chief, known as the Scoutmaster General. In 1657 he became British Ambassador to The Hague. The next year Cromwell died and Downing cannily offered his services to King Charles II. In 1682, Downing secured the lease on a piece of land close to Westminster and set about building the street that bears his name. Samuel Pepys described him as a “perfidious rogue”.

Perhaps Pepys was onto something as it appears that George Downing didn’t do  a particularly good job when it came to building on the marshy ground. He constructed 15 houses on shallow foundations. Winston Churchill wrote that Number 10 was “shaky and lightly built by the profiteering contractor whose name they bear”. The house numbering was different too: No 10 was originally No 5 and did not acquire its present number until 1779.

Horseguards with Downing Street to the right

Interestingly what is now No 10 is made up of two connected houses; Sir George Downing’s cheap terraced house at the front and a much grander one at the back, overlooking Horse Guards Parade. This was built in 1677, and was the home of Charles II’s daughter, the Countess of Lichfield. She was very cross about Downing’s development, as his houses looked into hers.

The last private resident of No 10 Downing Street was called Mr Chicken. Nobody knows anything about him other than his name. He moved out in 1732, after which King George II presented both houses to our very first modern-styled Prime Minister,  Sir Robert Walpole. Sir Robert refused to accept the property as a personal gift and asked that the king make it available to him and all future First Lords of the Treasury in their official capacity (the title “Prime Minister” wasn’t used until 1905). The brass letterbox on the black front door is still engraved with this title.

Downing Street from the far end, number 10 being the second door on the left.

In the early days of Downing Street the area was much livelier, in fact the now rather splendid Parliament Square was a slum just 200 or so years ago. There were lots of pubs nearby, such as the Cat and Bagpipes and the Rose and Crown. Some of them traced their origins back to medieval hostels set up for pilgrims seeking the shrine of Edward the Confessor at Westminster Abbey. Alongside the pubs were livery stables, dressmakers, lodging for MPs and hawkers selling their wares.

The famous Number 10 staircase with photos and paintings of centuries of previous Prime Ministers.

The building itself is made up of over 100 hundred rooms – only part of which is actually residential.  There is a private residence on the third floor and a private kitchen in the basement. Everything in between is offices, conference rooms, reception halls, sitting rooms, dining rooms, etc.  These rooms are all in constant usage – Foreign dignitaries are entertained here and the Prime Minister and his government base the majority of their work at Number 10.

In the 20th century alone, the First and Second World Wars were directed from within it, as were the key decisions about the end of the empire, the building of the British nuclear bomb, the handling of economic crises from the Great Depression in 1929 to the great recession, and the building up of the welfare state.

Some of the most famous political figures of modern history have lived and worked in Number 10, including Robert Walpole, Pitt the Younger, Benjamin Disraeli, William Gladstone, David Lloyd George, Winston Churchill and Margaret Thatcher.

Number 10 has 3 overlapping functions. It is the official residence of the British Prime Minister: it is their office, and it is also the place where the Prime Minister entertains guests from Her Majesty The Queen to presidents of the United States and other world leaders. The Prime Minister hosts countless receptions and events for a whole range of British and overseas guests, with charitable receptions high up the list.

The building is much larger than it appears from its frontage. The hall with the chequered floor immediately behind the front door lets on to a warren of rooms and staircases. The house in Downing Street was joined to a more spacious and elegant building behind it in the early 18th century. Number 10 has also spread itself out to the left of the front door, and has taken over much of 12 Downing Street, which is accessed by a corridor that runs through 11 Downing Street – the official residence of the Chancellor of the Exchequer.

It is only since Arthur Balfour became prime minister in 1902 that the prime minister has been expected to live at No 10. Only one former prime minister has ever died there: Sir Henry Campbell-Bannerman, who resigned on April 3 1908 but was too ill to move and died 19 days later. His last words were: “This is not the end of me.”

Behind the famous front door.

No 10 Downing Street is one of the most heavily guarded buildings in Britain. The front door cannot be opened from the outside because it has no handle, and no one can enter the building without passing through a scanner and a set of security gates manned by armed guards. However, in the first five years after Tony Blair became prime minister, 37 computers, four mobile phones, two cameras, a mini-disc player, a video recorder, four printers, two projectors and a bicycle were stolen from the building.

Up until around 25 years ago, one could walk up Downing Street and even pose for a photo on the front step of number 10 but terrorist attacks by the IRA resulted in the road being closed off to the general public.  Any chance of them being removed after peace was achieved in Northern Ireland was fleeting as it wasn’t long before current waves of Islamic inspired terrorism have come to the fore.

Out of all of this, perhaps the thing that most piqued my interest was the fact that in the decades after WW2 when Downing Street was repaired and upgraded, it was discovered that the famous black bricks of Downing Street weren’t black at all but were in fact red/brown in colour.  Over centuries of smoke fires in London, the soot had simply turned them entirely black.  This all proved too much and the decision was taken to permanently paint the bricks black to match the colour everyone thought that they knew them to be.

If you want, you can even explore some of 10 Downing Street for yourself on Google Maps, from where I nabbed some of the photos above. It’s a huge building and even though not all of it is mapped, who knows what you will find!  Just click below and you’ll find yourself by the front door. 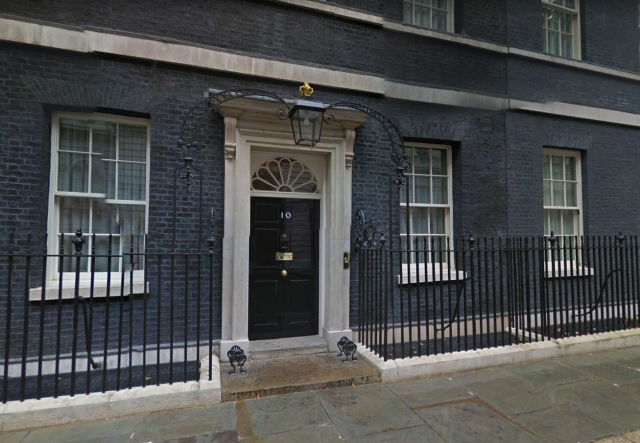 I am a writer and traveller with a penchant for history and getting off the beaten track. With several books to my name including a #1 seller, I also write environmental, travel and history articles for magazines as well as freelance work. Recently I've appeared on BBC Radio and Bloomberg TV and am waiting on the filming of a ghost story on British TV. I run my own private UK tours company (Ye Olde England Tours) with small, private and totally customisable guided tours run by myself!
View all posts by Stephen Liddell →
This entry was posted in history, London, Politics and tagged 10 Downing Street, Churchill, Downing Street, history, London, Politics. Bookmark the permalink.

4 Responses to The history of 10 Downing Street and a peek behind its famous black door.