The Armistice – The end of The Great War, WW1.

Posted on November 7, 2018 by Stephen Liddell

The Great War ended much differently than the never-say- die desperation of the Nazis in WW2. In 1918, there was no likely imminent collapse of Germany though the deprivation and starvation of many in the country was startling. Even though there were mutinies in the ranks of the French, order was generally maintained and despite the most bloody and devastating defeats, Britain maintained is discipline and low rates of mutiny or desertion. This wasn’t the case for the German army where there were increased rates of surrender and desertion. This is most likely because no matter how bad things were, the British and French never had any doubts that they wouldn’t lose the war but since American entry into the war this was obviously not the case to any German soldier with any sense.

It was well known that should the war continue into 1919 that the Allies would mount a massive attack with the millions of additional American soldiers that had entered the fray, it was clear that the end was coming for the Kaiser and that it would be better to try and negotiate some sort of surrender rather than be occupied.

Additionally there was widespread civil unrest within Germany itself due to the effects of the Royal Navy blockade and so Germany decided to enter into high level discussions with the Allies for 3 days. Unknown to the Allies the German delegation had been ordered to agree to any terms put before them and this is what happened on the 11th November.

Just after 5 o’clock in the morning of 11th November 1918, British, French and German officials gathered in a railway carriage to the north of Paris and signed a document which would in effect bring to an end World War 1. It took only a few minutes before news of the Armistice flashes around the world. However, the cease-fire was set at 11am that morning to make sure all soldiers on all sides would get the news and avoid any unnecessary deaths. However, that last day of the war still saw over 10,000 casualties which is actually more than on D-Day except here many of them were pointless and entirely avoidable as their commanders already new of the impending cease-fire.

Faring particularly badly on Armistice Day were the Americans. Led by General Pershing, he seemingly learnt little from the experience of their Allies, many American commanders made the most bull-headed decisions regardless of the well-being of their men or the known fact that the war was coming to an end. Some still had the enthusiasm for fighting that the British and French had long since lost and believed they had to exact maximum punishment on Germany believing the Armistice was a mistake whilst others had far less understandable reasons.

A good example of this is that case of General William Wright of the 89th American Division. Knowing that the Armistice was just hours away but learning that the nearby town of Stenay still had washing facilities he decided to take the town so that he could enjoy the next few days in relative comfort. His idiotic decision cost 365 American casualties alone.

The final British soldier to die was that of Private George Edwin Ellison, aged 40 who was a regular in the army even before the war. He was killed whilst scouting on the edge of Mons, just a short walk from where the first casualty of the war had fallen 4 years earlier. Almost a million British deaths later and just an hour or so from being told he could return home to his wife Hannah and 4 year old son James, he was shot dead. In fact, cemeteries in Mons have graves to people killed in both the first and last days of the war and by chance, both the first British soldier killed and the last are buried opposite each other just a few feet apart.

A million British soldiers died between the death of the first soldier and last.  There bodies by chance lay opposite and demonstrate how little the front-line moved and just what as waste of life it all was.

At 10.45am a French soldier by the name of Augustin Trebuchon was taking a message to his comrades that soup would be served a few minutes after peace fell when he was killed. Like many French soldiers killed on the last day, his gravestone records his death as occurring on the 10th November mostly likely to ensure that his widow would have no problems receiving a war pension.

A few minutes later, again near Mons, 25-year-old George Lawrence Price, a Canadian Private was chasing retreating soldiers through the streets. He entered a cottage from the front street as German soldiers fled through the back door, as he emerged outside he was shot and killed at 10.58am.

Perhaps most tragically of all was the case of the final death before the Armistice that of German descended American soldier Henry Gunther who was involved in a last minute charge against a German machine gun position. The Germans were well aware it was  just before the Armistice and they shouted for the attack to stop and to go back but as a matter of self-preservation they were forced to open fire and shot Henry dead at 10.59am. Even his official Divisional records state “Almost as he fell, the gunfire died away and an appalling silence prevailed.”

At 11am a young German office called Tomas approached a group of Americans to inform them that they could have the house they had been defending as the German soldiers were leaving it. These Americans didn’t know of the Armistice and killed the German. All these people and many more were killed whilst people in London, Paris and even New York were already celebrating.

At least the war to end all wars was over and despite the millions of deaths, the world partied like it never had before and nowhere more than London when Prime Minister David Lloyd George announced to the press that the war was over.  Crowds assembled outside Buckingham Palace and for several days up to 7 million people thronged the wide spaces around the Palace, lined Whitehall and celebrated in Trafalgar Square and Piccadilly.  It was a small break after 4 years of death and misery and before a life-time of mourning would get underway. 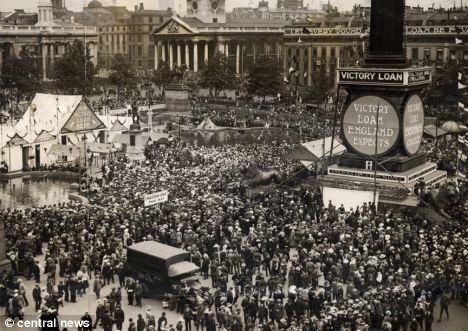 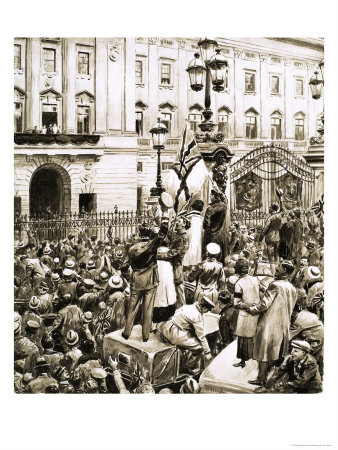 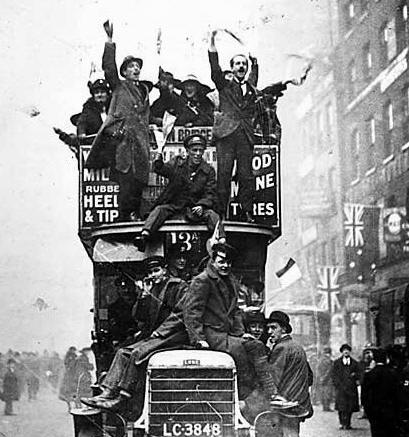 Celebrating on a London Double-Decker bus.

If you enjoyed this post there are plenty others like it on my blog which are edited extracts of my WW1 history book, Lest We Forget.  Lest We Forget is an easy to read guide to WW1 and is only 122 pages long.  Those 122 pages, however, cover pretty much the entire war as you can see from the chapter titles below.

In The Footsteps of Heroes comes about as a result of on-site research into Lest We Forget and provides a casual photo guide to the main British and Commonwealth locations of the Western Front.

In The Footsteps of Heroes on Kindle and paperback.

My Tour Company, Ye Olde England Tours can provide personal private guided tours to the region but for those who prefer to sightsee from the comfort of home then this book is for you.  Please note that though every effort was made to provide the highest quality photos, that I am not a professional photographer, and this book is much more a casual photo guidebook and not a photography book.

In The Footsteps of Heroes can be purchased from Amazon.com and Amazon.co.uk in Kindle and Paperback.

My books are also available direct from their respective publishers and also through Barnes and Noble, Kobo, Smashwords and Createspace.  You can also purchase this book through Apple iBooks store by clicking on the logo below.

I am a writer and traveller with a penchant for history and getting off the beaten track. With several books to my name including a #1 seller, I also write environmental, travel and history articles for magazines as well as freelance work. Recently I've appeared on BBC Radio and Bloomberg TV and am waiting on the filming of a ghost story on British TV. I run my own private UK tours company (Ye Olde England Tours) with small, private and totally customisable guided tours run by myself!
View all posts by Stephen Liddell →
This entry was posted in history, Life, WW1 and tagged 11th November, Armistice, First World War, In The Footsteps of Heroes, Lest We Forget, Poppy, World War 1, WW1. Bookmark the permalink.

3 Responses to The Armistice – The end of The Great War, WW1.