The Death Warrant of King Charles I

Posted on September 3, 2018 by Stephen Liddell

Having spent more time in Parliament recently than the Prime Minister, it has been great to spend some time studying one of the treasures of the Parliamentry archive, the Death Warrant of King Charles I.

It is a little hard to make out the details on the colour image so below is a higher resolution in black and white where you can see the third name down on the left column is that of Oliver Cromwell himself. 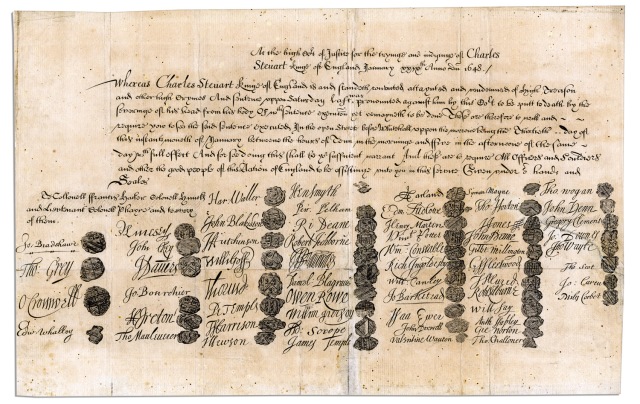 Thomas Harrison who I wrote about a few weeks ago, placed his signature on the third column from he left, second from bottom.

Can you imagine what a momentous thing these men were doing?  For time immemorial the monarch had reigned by the divine right of God.  Stalin or Hitler being executed by their own side wouldn’t have come close.

Not only were these signatures condeming their King to death but they were in the tradition of the time, defying the will of God…. though in practice it is hard to think God would place King Charles any higher than his oppressed people.

I am a writer and traveller with a penchant for history and getting off the beaten track. With several books to my name including a #1 seller, I also write environmental, travel and history articles for magazines as well as freelance work. Recently I've appeared on BBC Radio and Bloomberg TV and am waiting on the filming of a ghost story on British TV. I run my own private UK tours company (Ye Olde England Tours) with small, private and totally customisable guided tours run by myself!
View all posts by Stephen Liddell →
This entry was posted in Uncategorized. Bookmark the permalink.

2 Responses to The Death Warrant of King Charles I