Politics might be serious but elections don’t have to be.

Politics is generally a serious profession, albeit one so often mired in lies, broken promises and unachievable policies.  General Elections are the one time we have a chance to change the government at a national level.  Whereas in most countries it is a matter of utmost importance and seriousness with some nations even banning even the most legitimate of political opposition, it is something in Britain that we don’t quite ascribe too.

It is hard to imagine the President of the USA, Russia, China or the leaders of Germany, France or India having to stand against individuals in fancy dress and give serious political interviews next to them but this is one of the many novel quirks about our particular form of democracy.     Without their willingness to lose their deposit funding, our politics too would be almost boring but our innate ability to poke fun at ourselves even at times of possible European disintegration and the national divide that is Brexit is what makes us who we are.

Election-watchers around the world were no doubt surprised to see our Prime Minister standing against amongst others,  Lord Buckethead, who appeared alongside Theresa May on the podium as results were read out for the Maidenhead constituency. 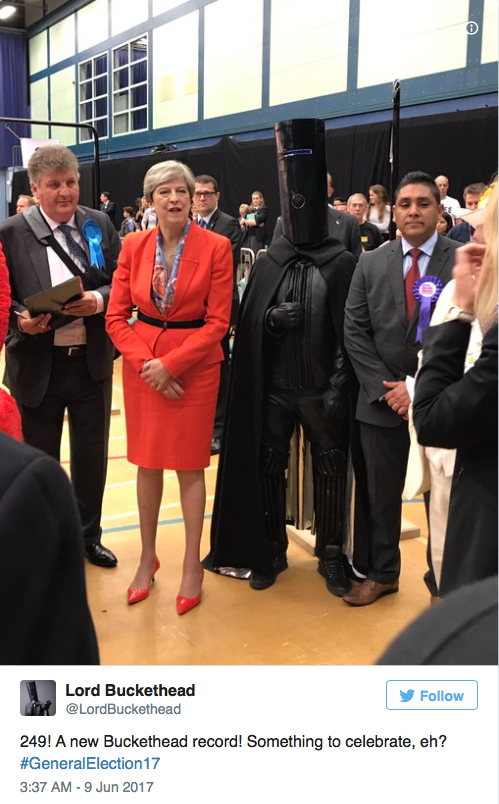 Buckethead, a self-described “intergalactic space lord” whose real name is unknown, won 249 votes in the Berkshire contest. It is not the first time Buckethead has stood against a prime minister – a candidate with the same name took on Margaret Thatcher in 1987 and lost with just 131 votes. He also stood against John Major in 1992.

This time around, Buckethead campaigned on a platform of strong but “not entirely stable leadership”. His manifesto, he declared after the results had been confirmed, delivered him a “new Buckethead record”. 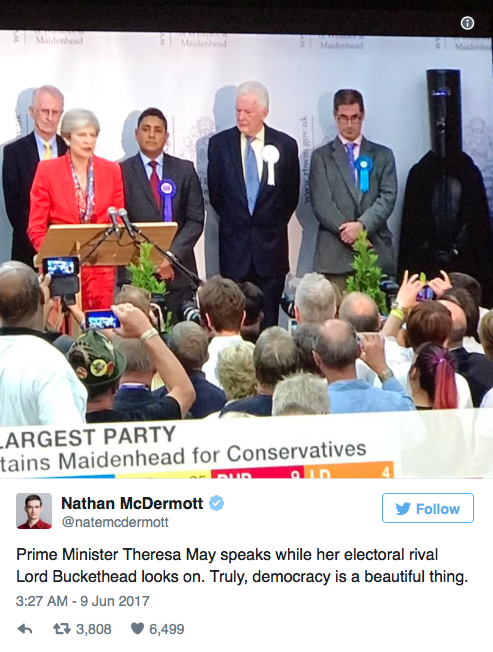 Buckethead’s reappearance on the political scene did not go unnoticed. 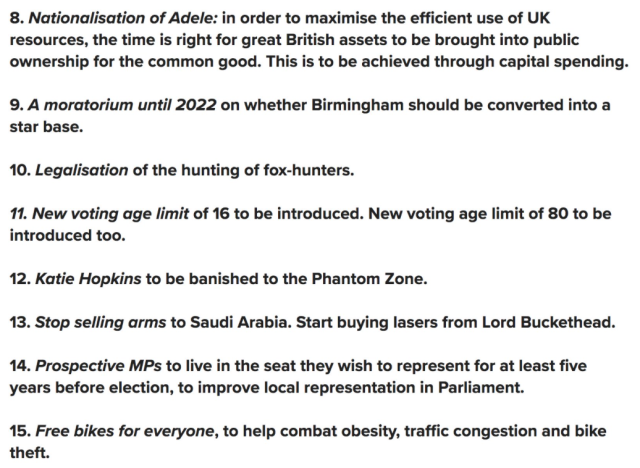 Part of the manifesto of Lord Buckethead.

While most British people are used to a varied range of candidates, mostly due to the advent of the oddball Monster Raving Loony party, election watchers from further afield were fascinated.

Underlining the British penchant for unorthodox candidates, Buckethead was joined in the Maidenhead vote by Elmo, who got three votes, and Howling “Laud” Hope of the Monster Raving Loony Party (119 votes).

A credible performance, I am sure you’ll agree but still some way off the highs of his predecessor who had one of the longest and unsuccessful political careers in history, Screaming Lord Sutch.

The 3rd Earl of Harrow deserves a blog post of his own one day and I’m probably crazy enough to write it.  I remember when The Monster Raving Loony Party finished above the SDP (Social Democratic Party) which I thought pretty much finished them off but apparently they are still on the go, along with the Judean Peoples Front in Life of Brian.    I believe the SDP did beat off Captain Bean of the Baked Bean Party and Blacky the Dog who campaigned for all the buttons on road crossings to be lowered to dog nose level.

Away from Maidenhead, the leader of the Liberal Democrats, Tim Farron, had to contend with a slippery rival in Cumbria’s Westmorland and Lonsdale.  Farron held on to his seat with a reduced majority of 777. Adding insult to injury, he was upstaged during his victory speech by Mr Fishfinger, a man dressed as a piece of frozen food.

Fishfinger, who changed his name by deed poll to take part in the election, decided to run after an informal Twitter poll found users would rather be led by a fish finger than Farron. He got 309 votes.   Obviously the thousands of voters who picked a different candidate need to take a long and hard look in the mirror when they realise who they overlooked.

Happily as the election seemed to deliver a disastrous result all round, we will most likely have another one soon.  I can’t wait, if anyone wants to crowdfund me into launching a wacky political party, let me know.  Alternatively, leave some as yet untapped manifesto ideas in the comments below 🙂

And yes I know, I avoided any obvious comment about Donald Trump.

I am a writer and traveller with a penchant for history and getting off the beaten track. With several books to my name including several #1 sellers. I also write environmental, travel and history articles for magazines as well as freelance work. I run my private tours company with one tour stated by the leading travel website as being with the #1 authentic London Experience. Recently I've appeared on BBC Radio and Bloomberg TV and am waiting on the filming of a ghost story on British TV. I run my own private UK tours company (Ye Olde England Tours) with small, private and totally customisable guided tours run by myself!
View all posts by Stephen Liddell →
This entry was posted in Funny & Humour, Life, News, Politics and tagged General Election, Lord Buckethead, Monster Raving Loony Party, Mr Fishfinger, Political Parties. Bookmark the permalink.

4 Responses to Politics might be serious but elections don’t have to be.