I was one of the last people to take to Facebook.  I was and am too busy to spend time looking at Selfies and when I communicate with friends I prefer to actually meet them or at least write to them properly and not with a TLC… ok Three Letter Acronym.

In fact I really created my profiles there because it was kind of expected of me for my businesses.  Writers and small businesses apparently need Facebook profiles and though it is true that I have sold the odd book through Facebook, I don’t think I have ever even had a serious inquiry for one of my tours which is in sharp contrast to the interest I receive from my blog, tour website and old-fashioned hard-work.

Dear Facebook, it’s not you, it’s me. Actually it is you…

However even from a personal stand-point it is hard not to notice how much Facebook has changed even in the year or so that I have been active let alone from when it was first created.  These days it is full of promoted posts that I have little or no interest in and suggested friends or links that I know nothing of and don’t seem to have a promising future with.

It’s clear that for the people behind Facebook, it is all about money and it would be naive to think it was ever anything else. They make Billions from adverts, sponsored posts and promotional campaigns when all we users really want to do is see what our Uncle in Australia is up to or see a friends holiday photo.

Despite my experience with Facebook, it has been an apparent useful and even vital tool for small businesses, people with hobbies that are verging on the edge of becoming a job and those related to crafts such as writing, painting and photography. A well placed update here and a cute photo there can soon lead to fans, friends of friends and people just accidentally stumble across the post providing great publicity.

Recently though Facebook has been curtailing this and such posts are not being naturally publicised as they once were and in January 2015 a new policy is being put in place that will stop these things in favour of paid for advertising posts.    Maybe the long road to this policy had already started before my Facebook début which is why for me it doesn’t seem to be such a big loss.

They don’t want us to reach our friends and audience but would rather show a paid for post of dancing chickens or a celebrity falling over drunk… actually I suppose dancing chickens are quite fun.

However if Facebook does all but ban such people and pages then it will make it all the duller and less interesting place.  Just because I once read an article a friend posted from Time magazine on the war in Ukraine, doesn’t mean I ever want to see any other article by Time myself, especially not the dim-witted posts that pollute my news feed at this time of year.  I do though want to see the updates and news of the people I have an investment in, not monetary as Facebook would want but emotional and physical.  We call them friends and family and those we admire or are interested in for one reason or the other.

Given that I’m not too hot about Facebook and that Facebook doesn’t seem to want offer much for me or want anything from me apart from my money, I’ve decided to branch out and will be starting opt-in mail lists and actively working on the new Tsu (pronounced Sue) social media website.

It looks almost identical to Facebook except it is cleaner and clearer to use and not littered with pesky adverts and suggested readings. Tsu is also fundamentally different than Facebook in a very important way in that it only keeps 10% of the advertising revenue, the rest belongs to us the users or at least us the content creators,  likers and sharers.

Keep it in the family (well your children and grandchildren as Tsu calls them).

Tsu only really started in October but it is a friendly place to be and at the moment you can get in there at the beginning.  Hopefully the ethos behind Tsu will ensure it doesn’t become obsessed with monetising its users and alienating them as Facebook has done.  It really is a cross between Facebook and Twitter with the ability to post updates, photos and use hashtags.  Create Friends and Followers and set-up pages for your hobbies, interests and businesses.

You have to be invited onto Tsu which isn’t really that hard as over 1 million people joined in its first few weeks which is quite a lot less than the 1.32 Billion of Facebook.  You shouldn’t really join Tsu just to make money, as you won’t make a lot but it will be a little and it will come to you, not Facebook and as I mentioned earlier it seems to be much more what I expected Facebook book to be.   You also earn a percentage of what those you invite onto Tsu create, like or share or children and grandchildren as they are known as to those in the know but that’s ok as they will earn from those that they invite onto the network.

Tsu probably isn’t going to change the world just yet but it is a complimentary network just like Twitter, Instagram and many others. Tsu also allows you to share your posts on these other networks so you’re not isolating yourself in any way.

If you fancy spreading your wings, trying something new or just safeguarding your online future against big brother Facebook changes in 2015 then why not check out Tsu.  I think for authors, creative types of all areas and small businesses Tsu could be a great idea.  Really though you just use it just as you do Facebook. You can use click on this link here and use my invite 🙂  https://www.tsu.co/StephenLiddell 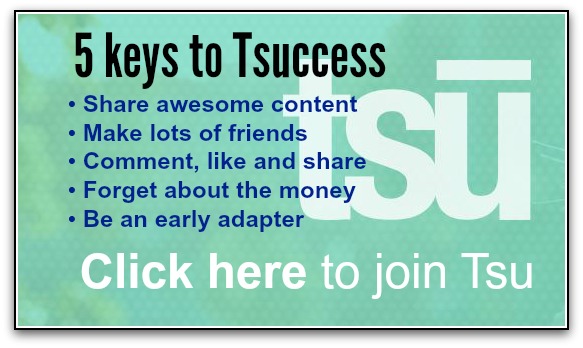 I am a writer and traveller with a penchant for history and getting off the beaten track. With several books to my name including a #1 seller, I also write environmental, travel and history articles for magazines as well as freelance work. Recently I've appeared on BBC Radio and Bloomberg TV and am waiting on the filming of a ghost story on British TV. I run my own private UK tours company (Ye Olde England Tours) with small, private and totally customisable guided tours run by myself!
View all posts by Stephen Liddell →
This entry was posted in Life, Popular Culture and tagged Authors, Blogging, Entrepreneurs, Facebook, https://www.tsu.co/StephenLiddell, Small Business, Social Media, Tsu, Tsunami, Twitter, writing, Yeoldeenglandtours. Bookmark the permalink.