Diary Rooms – Being human on the front line in Afghanistan

Following my recent review of Kajaki, I was hit by an unexpected frenzy of interest from those involved with the film participants in the war in Afghanistan in generally.  One interesting email I received was from Derek Eland, himself a former Paratrooper who had this time visited Afghanistan in the role of an official war artist.  He asked if I would like see a copy of his book and write up a book review for it.  I’m very glad that he did as it is a great read so here is my review below: 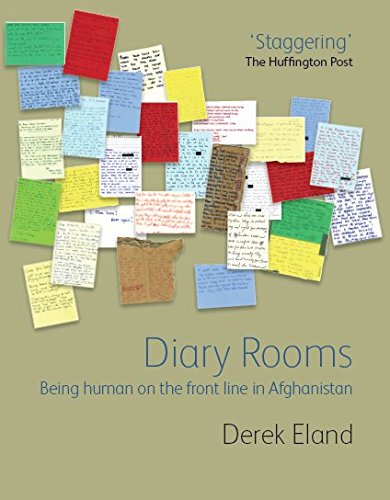 Diary Rooms
Being Human on the Front Line in Afghanistan

Diary Rooms : Being human on the front line in Afghanistan

Published By The Big Ideas Library   £12.99 in paperback format from online retailers and all good bookshops.

The war in Afghanistan is finally coming to an end for us in the West at least. When I say ‘us’ of course like most of us my experience of Afghanistan is little more than watching years of news reports and feeling a mixture of pity, sadness and admiration of the men and women who have been serving there. 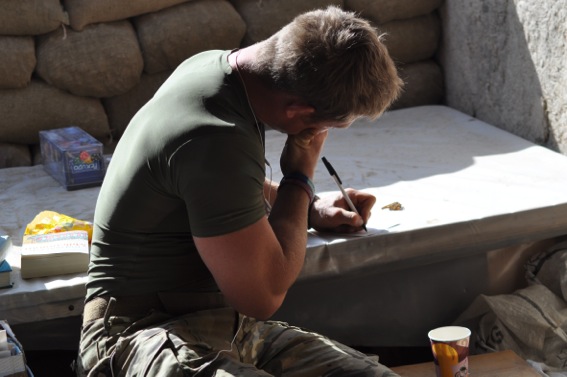 A soldier takes time out to write out his thoughts on the front line in Afghanistan. (Photo courtesy of Derek Eland)

There is an almost perceptible moment in time when wars shift from being current to being in the past but in living memory and then finally history. WW1 has recently eased into history but it is still perhaps most vivid inn the writings of the men who fought in it. Derek Eland’s unique book allows us to live through the war in Afghanistan in an even more compelling way by providing insights of daily life on the front lives by the men who have spent more than a decade fighting there.

Eland had already seen military service himself when he was invited to the front line in Afghanistan in the role of an official war artist. Like many of the men and women that he came across in the field, you might expect such a position to involving hauling round an easel and paints across Helmand province. If not that then you might expect his work to include a collection of photos of men under fire and beautiful if lonely desert patrols. Whilst there are many superb photos in Diary Rooms to call it a mere photography book would be both a misnomer and a disservice. 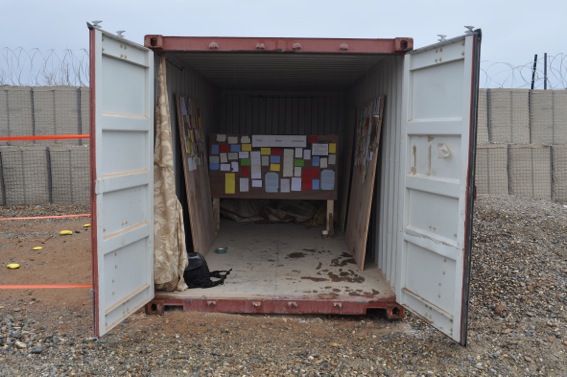 Instead Eland decided to take a unique approach and get a snapshot of what it was going through the minds of men on the front line by setting up a number of Big Brother style diary rooms where they could write brief notes on thee feelings going through their heads that day. Some are staggering, some are as near to being routine as possible in an active war-zone. Interestingly a number of Afghans are also included and time and again they express thanks for the presence of our people and the appreciation of the job being done there as well as a sympathy for our men and women being so far away from their friends and family. Taken together however the results are revelatory. 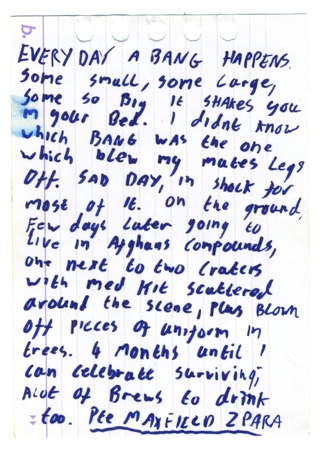 Heartfelt note from Pte. Mayfield of 2 Para. One of many similar in Diary Rooms.

The book itself is well laid out and very easy to enjoy. We get to see the handwritten notes of the soldiers involved as well as a typed reproduction of their words. Such is their poignancy, I often found myself reading the writing on the photos and dwelling on the content for a while before reading the typed text to make sure I took it all in all the while trying to imagine a little more of what the young man who wrote the note must be like or even if he is still alive today.

Time after time, what I saw stopped to make me think. Some of the things that happened must have been absolutely dreadful but in many cases the humour of the lads shine through. What is most striking is that whilst the media at large always highlights those who have been tragically killed in action, little is made of those who survive combat but at a price and that price is the loss of their limbs. It is the main worry of many of the men, that and the lonely and dangerous sentry duty or Stag as they call it. 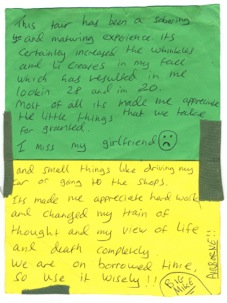 A handwritten note from Big Mike in Airborne who found his tour life-changing and who misses his girl-friend terribly. (Photo courtesy of Derek Eland)

The book is also full of wonderful photographs of soldiers in their every day life; shaving, writing, on patrol, on stag and simply enjoying their free time in what for six months passed as home. It shows us what 10 years of news reports cannot show and we hear from those who matter the most, the men and women on the front line.

What Diary Rooms really strikes home with is that despite the extraordinary things these men have been tasked with, just how ordinary the men are. Some love their job, some hate it. Simple things like letters and food from home make their day whilst the weather and dust are a perennial bug-bear. 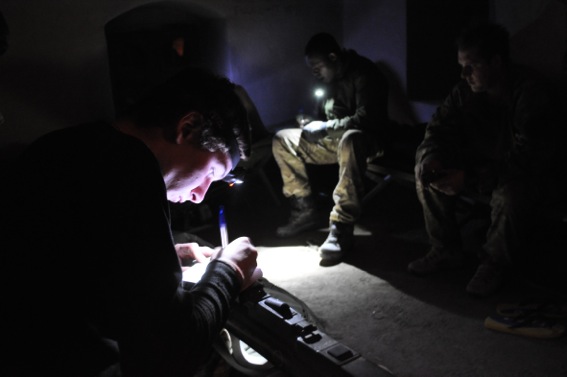 Diary Rooms by Derek Eland brings a fresh perspective to war photography and the Afghan campaign in particular.

Whatever your feelings are over the war in Afghanistan as a whole, the spirit and bravery of those who fought there cannot be questioned. By the end of Diary Rooms the reader is inclined to feel that in a small way they have lived through the war with them and all the little and big annoyances and mini-celebrations that making it through each day brings.

Diary Rooms presents a unique look at what it was like being human on the front line in Afghanistan. For those wanting something different than the typical narrated history or logbook and who want to see what life was really like and to gain an unedited, simple but humbling insight into the minds of the men who served there then Diary Rooms published by the Big Ideas Library and written by Derek Eland is a revelation. One pound from each purchase of Diary Rooms goes towards the charity Combat Stress, just a little way to say thanks for those who fight so that we don’t have to.

Derek is an accomplished artist based in the beautiful Lake District region of Northwest England but his works have been featured in numerous exhibitions and publications across the land and his website can be visited at http://derekeland.com 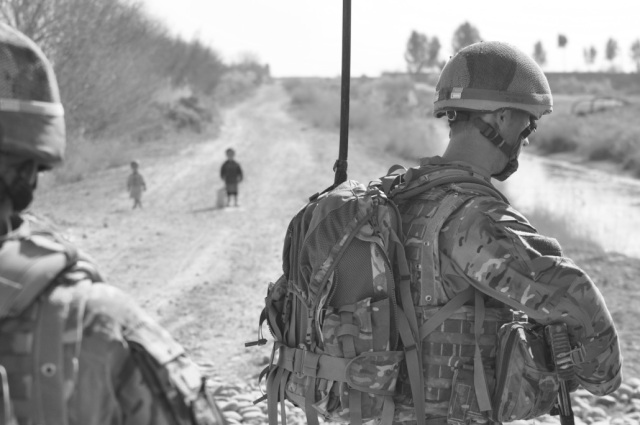 I am a writer and traveller with a penchant for history and getting off the beaten track. With several books to my name including a #1 seller, I also write environmental, travel and history articles for magazines as well as freelance work. Recently I've appeared on BBC Radio and Bloomberg TV and am waiting on the filming of a ghost story on British TV. I run my own private UK tours company (Ye Olde England Tours) with small, private and totally customisable guided tours run by myself!
View all posts by Stephen Liddell →
This entry was posted in history, News, writing and tagged Afghanistan, Book Review, Death, Derek Eland, Helmand, history, Kajaki, Life, New book launch, Para, UK news, war, writing. Bookmark the permalink.