We’re nearing the end of my series of posts set on and around Whitehorse Hill and the Ridgeway.  It would be easy to think that surely there is nothing else to see within the short walk of the car park here but incredibly there is still more and if we have already visited the smith who forged King Arthur’s sword, Excalibur, then it is fitting that it is here where another pivotal if slightly far-fetched part of English history played out here, that being the location where our Saint George, killed the dragon. 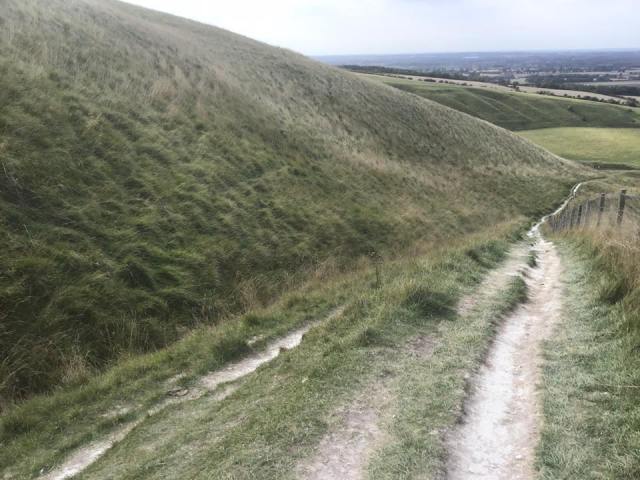 One route down from the Whitehorse to Dragons Hill

It is a hillock more than a hill, around 450 feet or 139 metres in height but only at a relative height of around 90 feet or 30 metres from the immediate area.  Reaching it from the Whitehorse was actually much more tricky than I imagined it would with a rather treacherous path down a steep hillside and with a barbed wire fence just an arms length away all ready to rip your skin to shreds should you forgetfully reach out to grab it when slipping!  Little wonder why I was (again) the only person here!

A tree that the dragon burnt with his fiery breath…. no I’m totally making that up!

Though it has been shaped by man, it is a naturally occurring chalk hill of a typeset particularly uncommon in these parts. What does make it special is the fact that Saint George killed the dragon here and the blood from the dragon flowed out onto the grass and poisoned the soil.  Ever since there has been no grass here and I have a photo to prove it! 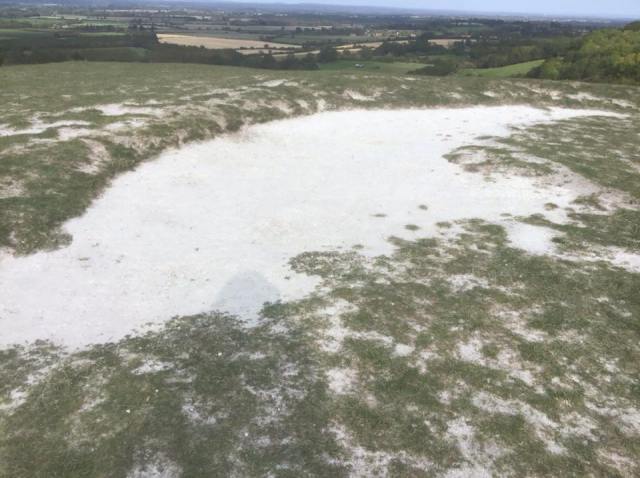 Where Saint George Killed the dragon!

Obviously this whole area is incredibly rich in history and mysticism and this hill itself is often home to pagan ceremonies. I find it fascinating that so much happened within a mile or so of each other all those thousands of years even if it is debatable how much of it was mythologised, it is a special place.

Standing where Saint George killed the dragon towards Whitehorse Hill. There is a road between the to which you can’t see due to the steepness of the slopes. 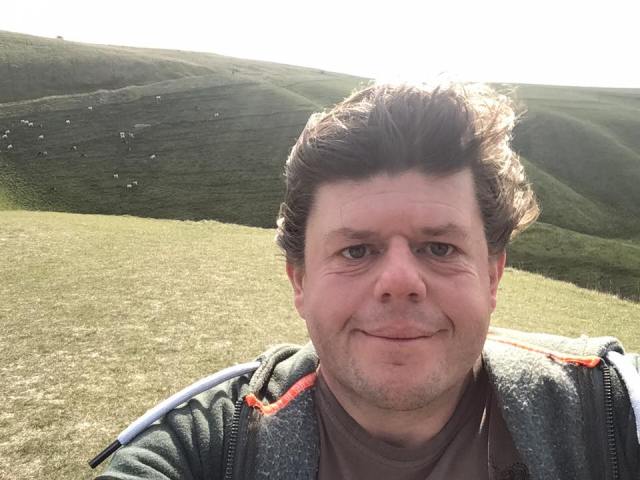 Lockdown Hair and the dragon or at least a strong wind.

The wind comes up the valley in such gusts that a second after taking this photo my iPad flew out of my hands though its case protected it completely.  I also have a bad hair photo where I look like Cousin It from The Addams Family.  I made a mental note to not come here again until I either had a hair cut, wore a hat or there was no wind.

I am a writer and traveller with a penchant for history and getting off the beaten track. With several books to my name including several #1 sellers. I also write environmental, travel and history articles for magazines as well as freelance work. I run my private tours company with one tour stated by the leading travel website as being with the #1 authentic London Experience. Recently I've appeared on BBC Radio and Bloomberg TV and am waiting on the filming of a ghost story on British TV. I run my own private UK tours company (Ye Olde England Tours) with small, private and totally customisable guided tours run by myself!
View all posts by Stephen Liddell →
This entry was posted in Heritage, history, Life, Popular Culture, Travel, Ye Olde England Tours and tagged George and the dragon, Legends, Myths, national trust, Oxfordshire, Saint George, Uffington. Bookmark the permalink.

8 Responses to Dragons Hill – Where Saint George killed that dragon!