Visiting the home of Edward Adrian Wilson – a forgotten hero who died with Captain Scott of the Antarctic.

Every now and then I write a post not quite realising the scope it will take on, perhaps once or twice a year I investigate something and it gives me something to reflect on all year and this is what happened this time.

There is a house on Stanmore Hill that I’ve always liked and its not one of the grand houses but a relatively modest house.  One that in another life I might be able to afford if only I was born more a Napoleon and less a Snowball.  For the area isn’t just for multi-millionaires, there has to be places for mere millionaires too.

I’ve gone past this house for almost 40 years by bus and walked past it for several decades too.  Back then there was no internet and still recovering from WW2, local governments had seemingly more important things to prioritise than heritage matters and so it is only recently when researching for my new Stanmore tour that I found out about the one time special owner.

I wasn’t sure if I was going to make it today.  Our 3 month long warm draught is temporarily over and for the 7th time since February I have the touch of Covids.  I know a 4 or 5 mile walk is a bit of a trek to many but for me it is just getting warmed up but I still didn’t feel great if only because I knew I had to walk up the steep hill back home.

I remember listening to the radio last eek and the presenter was saying how when he was a boy, he would walk 2 or 3 miles just on the chance that his friend might be in and how no-one would ever do anything like that today but I think that’s exactly how I am.  If it’s not worth walking an hour then it’s probably not worth doing at all.

The painted number on the wheelie bin showed I’d done my research.

Number 73 Stanmore hill is not quite as old as my cottage 🙂 being built only in 1830 though it is of course far grander than mine.   It was originally called Loscombe Lodge and later Robin Hill. It stands three storeys high and  look the Keystone above the front door it is carved with a bearded face.

This building was originally Stanmore’s first police station. The cells for the prisoners were situated below ground and were well protected with iron bars. They are still there and can be seen from the front garden.

I peered from the boundary of the street and it is true, there are subterranean windows.  I was torn between taking photos from the street and entirely thoughtless going right up to them to take a photo and after a few minutes found a middle ground and went up a side path to get a better view! 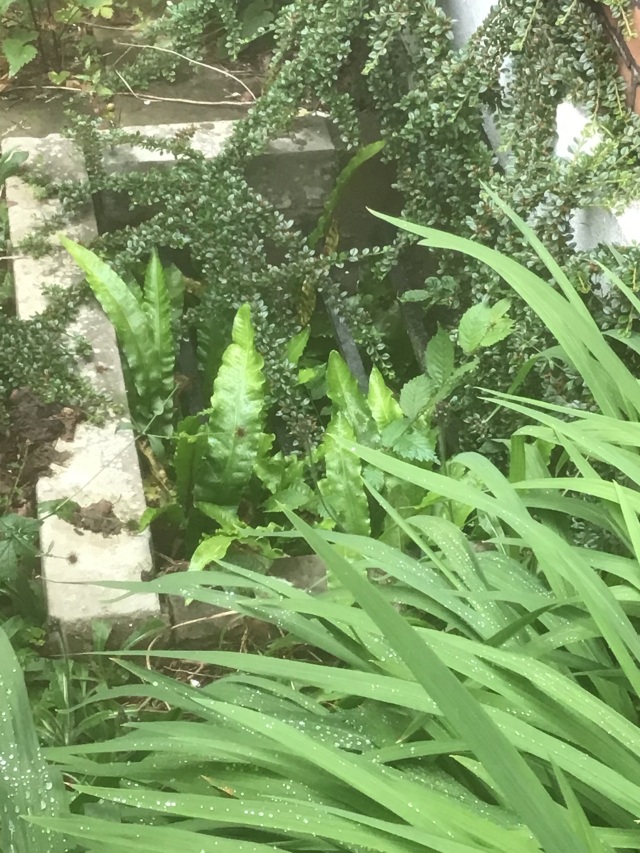 The foot of the house is surrounded by iron bars on at least two sides.

The real reason I had come here however is because it was once the home of Edward Adrian Wilson. Edward was an English physician, polar explorer, Natural historian, painter and ornithologist. He was among the five-man Polar party on that first great Expedition to the South Pole and died alongside Captain Scott on the return journey back to base camp. Cape Wilson in Antarctica is named after him. 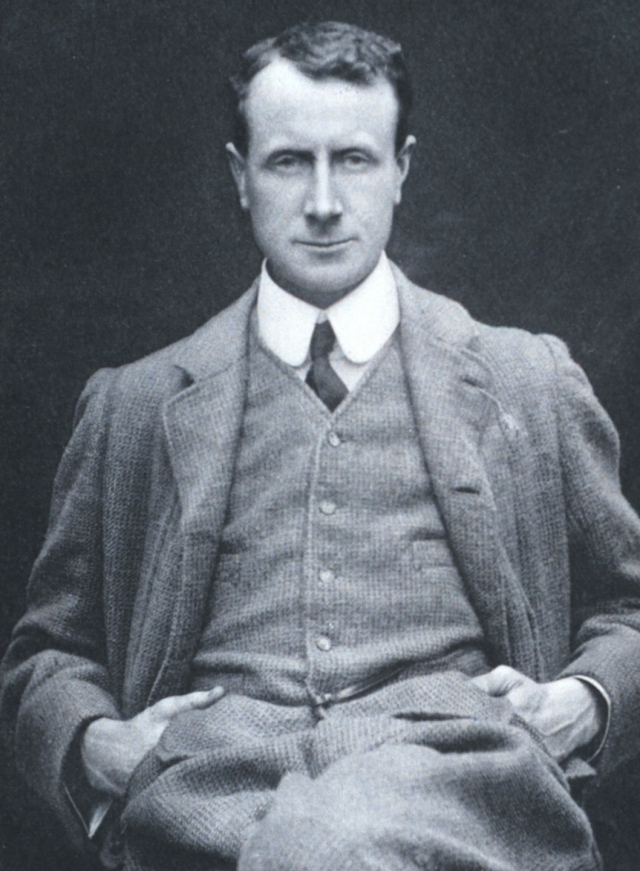 Wilson was a resident of Stanmore recovering from a debilitating tuberculosis, and contemplating the career he was going to lead. Born in Gloucestershire in 1872, Wilson early on developed a love for countryside and drawing – the two often blurring in his pastime – but by the 1890s had decided to pursue a career in medicine, only to have his doctorate snatched away from him when he contracted tuberculosis during mission work in the Battersea slums. Becoming seriously ill, his career plans were put on hold and, under the advice of his doctor to swap the smoke of the city for fresher country air, Wilson eventually came to Stanmore, to Loscombe Lodge.

Yet, perhaps as a result of the woes of his tuberculosis and the role of his artistry in offsetting its misery, Wilson was now considering abandoning his pursuit of a doctorate in favour of being a professional artist instead. Professional art lessons had long been a dream of his, and, in the months of recovery, this dream had seemingly been rekindled. Wilson, however, found opposition to this idea in his father as well as from colleagues in the British Ornithological Union. Despite his long-harboured desire for artistry, these forces eventually won out – Wilson committed himself to his doctorate, and soon after found work at the Cheltenham General Hospital.

Recently mounted heritage sign on the front wall of #73.

His time at the hospital was not to last long, however. Shortly after taking up his post there, Wilson found employment in the first expedition made by Scott to the Antarctic in 1901, and with him he would take his passion for drawing – putting the polar icescape to the page as they trudged across it, and in so doing giving people the first glimpses of the frozen land that covers the southern cap of our world.

This house then, played a particularly important role in the polar explorer’s life. Had it not been for Stanmore, Wilson might never have recovered from his tuberculosis enough for him to embark on the famous expedition, and, had it not been for his rediscovery of his passion for art, he might never have brought back with him the first drawings of the pristine, untouched southern icescape. 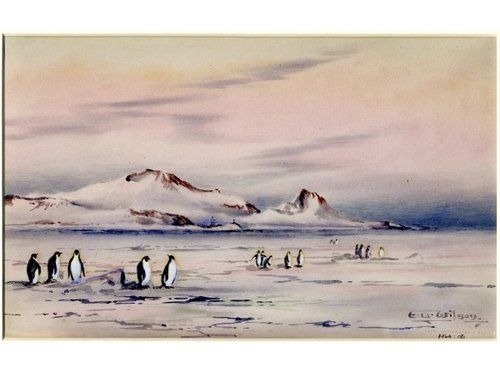 One of his many great works of art.

Eventually Edward Adrian Wilson was to return to the Antarctic with The Terra Nova Expedition under the command of Captain Robert Falcon Scott.   On 17th January 1912, Scott’s team reached their objective and Wilson became the first doctor to reach the South Pole.

But the British team had been beaten to their goal of being the first to reach the South Pole, arriving shortly after Roald Amundsen. Feeling defeated and disheartened, Scott wrote: “Great God, this is an awful place.”

Scientific heroes standing on the South Pole on the 17th January 1912.

Wilson was among the three last surviving members who battled on, having reached the pole. But the team soon became ice-locked in their tent by extraordinarily bad weather even by Antarctic standards, before finally succumbing to starvation just 11 miles from safety having traversed the icy continent in temperatures of minus 70 degrees with just furs and a basic cloth tent for protection.

Although Scott’s team was not the first to the South Pole, they left a blazing legacy of Antarctic science which is still more than the foundation of studies today.  It is thought if they hadn’t stopped to document everything they would likely have achieved all their goals but the fact that they were so studious is reflected in that one can still read Captain Scott’s epic diary even today.

Some of the finest paintings of Pengiuns in their natural habitats 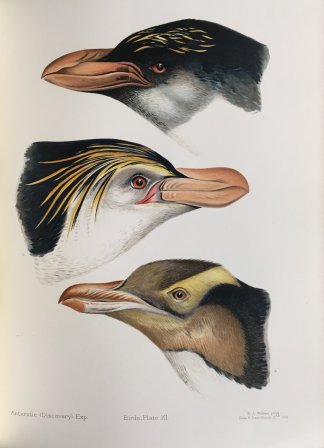 Many sketches were very detailed.

Edward Adrian Wilson must have been an extraordianry man combining great intellect and kindness with bravery and loyalty and all whilst not enjoying good health.  He had already saved the life of Ernest Shackleton on an earlier expedition and its clear that Captain Scott thought the world of him.  In fact when the team’s bodies were discovered in November 1912, Scott was found partially out of his sleeping bag, his left arm extended across Wilson.

Here are just a few of the compliments about him by Captain Scott.

And finally this letter Captain Scott wrote to the wife of ‘Uncle Bill’ Adrian Edward Wilson that he presumably wrote in their last hours together and a year later arriving to his wife who once lived right at this house I was outside.  What a shame it isn’t possible to go back in time 120 years and knock on that front door.

It’s really rare I find such a decent person in history and knowing that the house I always admired was once the home to such an incredible individual is a special moment.    Now every time I go past his house I will think of him.

I hope you enjoyed this post; it ended up as one of those that got a little out of control compared to what I had initially planned but no less than Adrian Edward Wilson deserves.  And another point of interest on my upcoming new tour.

Incidentally your can read the diary and letters of Captain Scott as they are all published!

I am a writer and traveller with a penchant for history and getting off the beaten track. With several books to my name including a #1 seller, I also write environmental, travel and history articles for magazines as well as freelance work. Recently I've appeared on BBC Radio and Bloomberg TV and am waiting on the filming of a ghost story on British TV. I run my own private UK tours company (Ye Olde England Tours) with small, private and totally customisable guided tours run by myself!
View all posts by Stephen Liddell →
This entry was posted in geography, history and tagged 73 Stanmore Hill, Antartica, Art, Captain Scott, Diary, Edward Adrian Wilson, Explorer, South Pole, Stanmore, Wales. Bookmark the permalink.

8 Responses to Visiting the home of Edward Adrian Wilson – a forgotten hero who died with Captain Scott of the Antarctic.