Aleister Crowley – The Wickedest Man In The World

Whilst writing my blog on Bloomsbury recently and following a day spent exploring every single street that I could happen upon, I became intrigued by a man who was once known as ‘The wickedest man in the world’.  This is quite some going for a man who lived whilst Stalin and Hitler were going strong.

Like some other figures I have written about in history, Aleister Crowley seems to have lived quite a life

Of course, Bloomsbury was and still is crammed full with writers of all persuasions and talents but none can quite equal the infamy of Aleister Crowley who settled in Museum Street, a side street almost opposite the entrance to the British Museum.

Like others literary figures in Bloomsbury, Aleister Crowley was a man ahead of his time.  His time was one that couldn’t understand him or at least acknowledge his ‘latent genius’ due to his shocking behaviour.

Aleister Crowley was many things; a writer, painter, prophet, a powerful magician who could almost be said to be the father of the modern tradition of magic and most terribly for his time, he was a prominent Occultist and he was the self-declared Beast 666.

Aleister Crowley was born on the 12th October 1875 in Leamington Spa, Warwickshire to a wealthy and eminently respectable family.   They were devout Christians and staunch members of the Plymouth Brethren sect.  They brought up young Crowley in an atmosphere of pious Christianity, against which he constantly rebelled.

After the death of his father when Aleister was just 11, Crowley inherited the family fortune and went on to be educated at Trinity College Cambridge.  There he wrote and studied poetry.  He loved the out-doors life and was a capable mountain climber, in pursuit of which he attempted some of the highest peaks in the Himalayas.  In 1898 he published his first book of poetry called “Aceldama, A Place to Bury Strangers In”, a philosophical poem by a ‘Gentleman of the University of Cambridge’ in 1898′.  In the preface he describes how God and Satan had fought for his soul and states:  “God conquered – and now I have only one doubt left – which of the twain was God”?

It was while he was at Trinity that Crowley became interested in the occult Crowley soon discovered that he was excited by descriptions of torture and blood.  He liked to fantasise about being degraded and abused by a ‘Scarlet Women’, one who was dominant, wicked and independent.

One of the books he read about this time was by the author ‘Arthur Edward Waite’, entitled “The Book of Black Magic and of Pacts”.  It hinted at a secret brotherhood of occultists and Crowley became even more intrigued.  He wrote to Waite for more information and was referred to “The Cloud upon the Sanctuary – By Karl von Exkartshausen”.  This book tells of the ‘Great White Brotherhood’ and Crowley determined he wanted to join this group and advance to its highest levels.  Later that year on the 18th November 1898, he and Bennett both joined the ‘Hermetic Order of the Golden Dawn’, the elusive Great White Brotherhood (see ‘S.L. MacGregor Mathers and the Hermetic Order of the Golden Dawn’).

Other members of Golden Dawn included Brahm Stoker who of course worte Dracula and WB Yeats (a member of the Bloomsbury Group mention in my last post) Many of the more conservative members of Golden Dawn believed that a magician should abstain from sex, drink and drugs to keep his mind clear. Aleister Crowley however was a keen advocate of all three and it being all too lightweight for the Beast 666, who was soon accused of black magic.

This is likely true as he took up residence on the shores of Loch Ness and in Scotland and performed the Abramelin.  This is a six month long black magic ritual that was thought so powerful, it had not been performed for centuries.  The aim of the ritual is to invoke the magician’s Holy Guardian Angel, to do so he must also evoke the twelve Kings and Dukes of Hell – including Lucifer, Satan, Leviathan and Belial – and bind them, thereby gaining command of them in his own mental universe. The ceremony has an introduction which states that nobody should perform it.

However before the six months was up, he left Loch Ness and returned to London.  No doubt the most powerful evil deities in history would wait until he was less busy.

As well as being dismissed and outcaste by the New Forrest witches, all was not well within the Golden Dawn.  By this time Crowley had moved out of Trinity Collage without earning his degree, and taken a flat in Chancery Lane, London.  There he renamed himself ‘Count Vladimir’ and began to pursue his occult studies on a full-time basis.  Crowley had a natural aptitude for magic and advanced quickly through the ranks of the Golden Dawn though rivals quarreled constantly with Crawley being attacked by an astral Vampire and so responded with an army of demons led by Beelzebub himself.

However much one might believe in such magic, it was obviously getting out of hand and bringing unwanted attention to the order and so Aleister Crowley was expelled. He began to travel around the world to Egypt, Mexico and San Francisco where he recognised that the Chinese immigrants in Chinatown there were spiritually superior to their Anglo-American brethren.

After a disastrous attempt to climb one of the world’s highest mountains, Kangchenjunga, where he is said to have ignored the pleas for help of his party during an avalanche which killed four men, preferring to sit in his tent drinking tea, and then being forced to leave India after shooting dead a man who had tried to mug him in Calcutta, Crowley headed for China.

By now Crowley was fast becoming infamous as a Black magician and Satanist, he openly identified himself with the number 666, the biblical number for the antichrist.  He also kept with him a series of ‘Scarlet Women’; the best known of these was Leah Hirsig, the so-called “Ape of Thoth”.  Together they would indulge in drinking sessions, drugs and sexual magic.  It is believed that Crowley made several attempts with several of these women to beget a ‘Magical child’, none of which worked and instead he fictionalised his attempts in a book called “Moonchild”, published in 1929.

Crowley was never to reach such personal highs again and after losing a high profile libel case in court he was bankrupted and  drifted into full-blown heroin addiction, eventually dying in a boarding house in Hastings, England in 1947, after his doctor had refused to continue his opiate prescription. The doctor died within 24 hours of Crowley. It is believed the Beast 666 had put a curse on him. 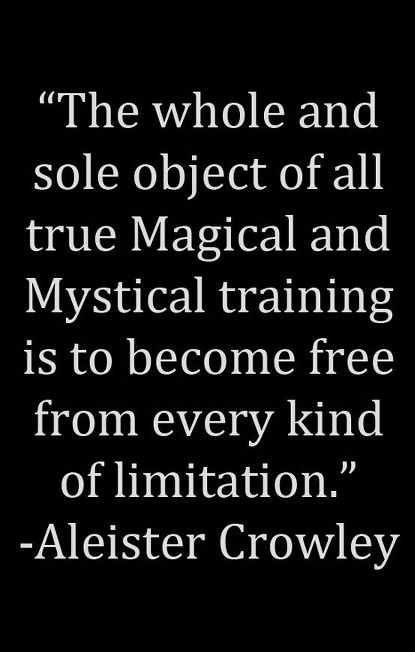 In a final snub at the society that had so misunderstood him, he left instructions that he was to be cremated and instead of the usual religious service, his ‘Hymn to Pan’ and other extracts from his writings was to be proclaimed from the pulpit.  Finally his ashes were to be sent to his disciples in America.

In many ways Aleister Crowley was not a well-liked man, but he influenced and had an effect on the build up to the new era of modern witchcraft.  His knowledge of witchcraft and magick was profound and without question, and he has passed on that knowledge through his books.  In today’s more liberal society more and more of Crowley’s books are being reprinted as we begin to appreciate his strange genius.  Indeed some of his books have now gained classical status including Gnostic Mass and The Book of Law. Other books include: Magick in Theory and Practice, 777 And Other Qabalistic Writing and The Book of Thoth.

Just a few doors down from where Aleister Crowley lived is The Atlantis Bookshop, possibly the ‘finest’ bookshop dedicated to magic and the occult anywhere in the world. 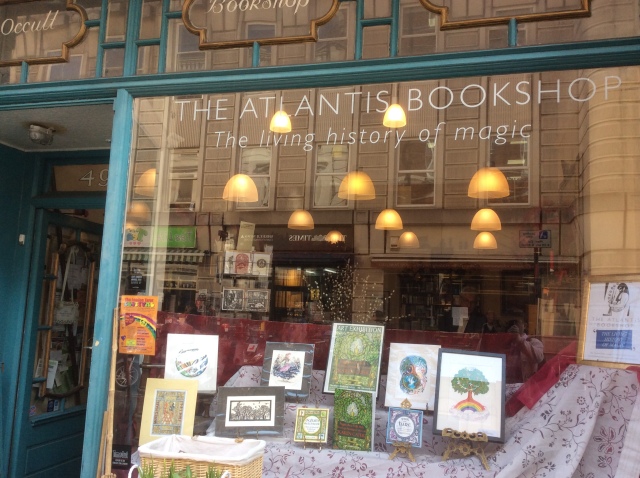 I am a writer and traveller with a penchant for history and getting off the beaten track. With several books to my name including several #1 sellers. I also write environmental, travel and history articles for magazines as well as freelance work. I run my private tours company with one tour stated by the leading travel website as being with the #1 authentic London Experience. Recently I've appeared on BBC Radio and Bloomberg TV and am waiting on the filming of a ghost story on British TV. I run my own private UK tours company (Ye Olde England Tours) with small, private and totally customisable guided tours run by myself!
View all posts by Stephen Liddell →
This entry was posted in history, Life, London, Religion and Faith and tagged 666, Aleister Crowley, Bloomsbury, Death, Faith, London, Magic, Satan, The Atlantis Bookshop, The Occult. Bookmark the permalink.

7 Responses to Aleister Crowley – The Wickedest Man In The World