Posted on September 5, 2018 by Stephen Liddell

We are often labelled a nation of animal lovers, gardeners, shopkeepers, queue-ers, weather-watchers, good manners and apologising etc etc but surely there are few things that we are better known for than for our love of a good cup of tea.

I don’t drink coffee, I don’t even like the smell.  All those stupid and ever increasing terms for drinks that look like mud and smell like something from the back end of an animal is not for me.  Just a simple cup of tea will suffice and none of that namby-pampy infused fruity rubbish just good honest tea.

How to make the perfect cuppa is a subject of great debate and one that that will probably never be solved but at least now research has revealed how the majority of Brits like to take our tea.

A new YouGov Omnibus survey of nearly 1,600 people has revealed almost half prefer a brew that’s exactly midway between a strong black tea and an ultra-weak cuppa with a liberal pouring of milk.

Researchers produced an eight-point strength scale featuring different colours and 47 per cent plumped for a tan shade right in the middle. A further 14 per cent prefer their tea one shade more milky, and 19  per cent one degree less. 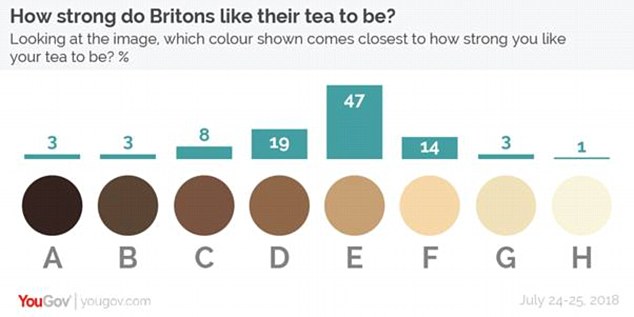 The study also aimed to solve the argument over whether milk should go in first or not, with an overwhelming 79 per cent saying it should be added last.  Personally I can’t understand why you woud add milk first as then you have little control over the strength of what your tea might be.  it would be like pressing the brakes on your car before you even put your foot on the accellerator!

Researchers also dicovered the nation’s favourite brand of tea bag is Yorkshire Tea, which has the backing of a quarter of drinkers.

PG Tips came a close second with a 22 per cent share of the fanbase, while Tetley lingered behind at just 16 per cent.

Britons drink 165million cups of tea every day, or more than 60billion a year.

Previous research on the nation’s tea habits by Arla B.O.B milk found Northern Irish tea drinkers like their brew the strongest and darkest.

Those in Scotland and the North East of England are most likely to appreciate a milkier mug with a more subtle flavour.

Tea fans in the South East of England are most likely to leave their tea bag in for longer, letting it brew for an average of 64 seconds, which is seven seconds longer than the national average or 57 seconds.

East Anglians are in the greatest hurry, letting the bag stew for just 48 seconds.

Personally having come from the North East of England, I like a milky tea and my ideal cuppa is just a little darker than an ‘F’.  However I don’t leave my bag in for anything like 64 seconds or even 48 seconds.  5 or 6 seconds is enough for me, basically as long as it takes me to pour boiling water on the bag to fill the mug.

Also I re-use my bag several times.  I remember that in Georgian times, tea was such a luxury that even rich households would re-use their tea 15-20 times and then sell the dregs to the poor on the streets who would continue to go on using them.    I’m not quite that into recycling that much but freshly made 5th cuppa below is the fifth from the same teabag.

Given how I get the most from my tea, it’s fair to say that my box of 750 tea Yorkshire tea bags have another year or two left before I have to hit the shops!

I am a writer and traveller with a penchant for history and getting off the beaten track. With several books to my name including several #1 sellers. I also write environmental, travel and history articles for magazines as well as freelance work. I run my private tours company with one tour stated by the leading travel website as being with the #1 authentic London Experience. Recently I've appeared on BBC Radio and Bloomberg TV and am waiting on the filming of a ghost story on British TV. I run my own private UK tours company (Ye Olde England Tours) with small, private and totally customisable guided tours run by myself!
View all posts by Stephen Liddell →
This entry was posted in Culture, Heritage, Life, News and tagged Cup of Tea, Cuppa, drinking tea, Life, Milk or water first?, PG Tips, Tea, Tetley, Yorkshire Tea. Bookmark the permalink.