A few weeks ago when I was walking along Hadrians Wall, I took the opportunity to make a few deviations along the way.  One such side-trip was to the ancestral home of George Washington in the aptly named old village of Washington. 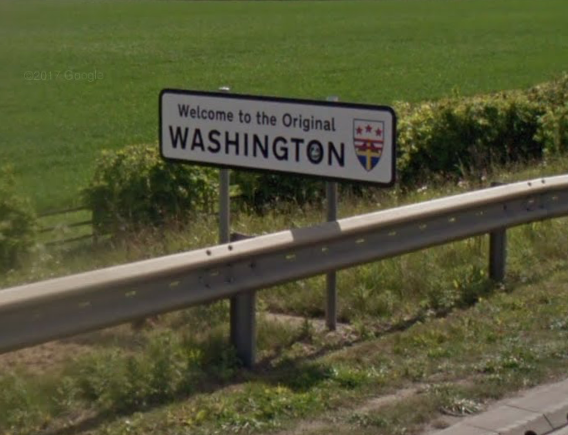 Washington lies between the large cities of Newcastle Upon Tyne and Sunderland and whilst story of George Washington himself is well-known, less people are aware that like many other leading prominent Americans,their origins come from the North East of England.

If history had chosen a different path he could have been named George Hertburn. 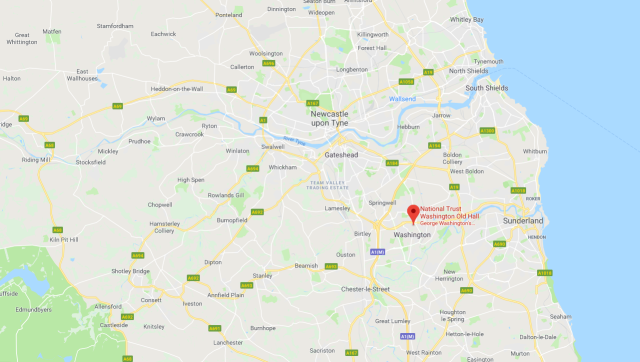 In what was the ancient County Palatine of Durham and dating back to Anglo-Saxon times, the name – now synonymous with the first President of the United States – has been spelt Wessynton, Whessingtun and Wassington.

It is now commonly known and spelt as Washington – even if some local people pronounce it Weshintun.

The origins of the ‘Washington’ name

Around 1180, William de Hertburn, a tenant of the Bishop of Durham Hugh le Puiset exchanged his holding near Stockton for that of Washington.

The Bishop was reorganising his estates and needed Hertburn to consolidate his lands in that part of the Bishopric, or district.

Washington, other than for the land belonging to the church, was untenanted and, therefore, available to William. With Washington now his new home and as custom dictated, William assumed “de Wessyngton” as his new surname. 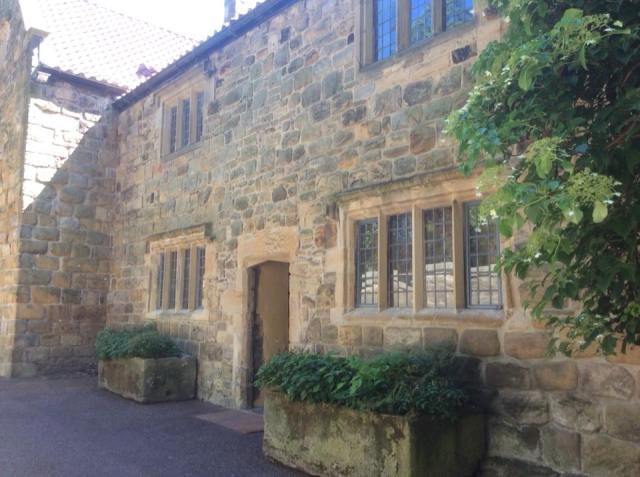 The entrance to Washington Old Hall

The house, or Washington Old Hall, incorporates a large portion of a medieval manor which was home to the Washington family.

Whether William built himself a new manor house or moved into an existing one is unknown.

The earliest parts of this building date back to the mid-13th century – a time when there was relative peace on the Anglo-Scottish border and funds were available from the marriages of successive Washingtons to wealthy widows. 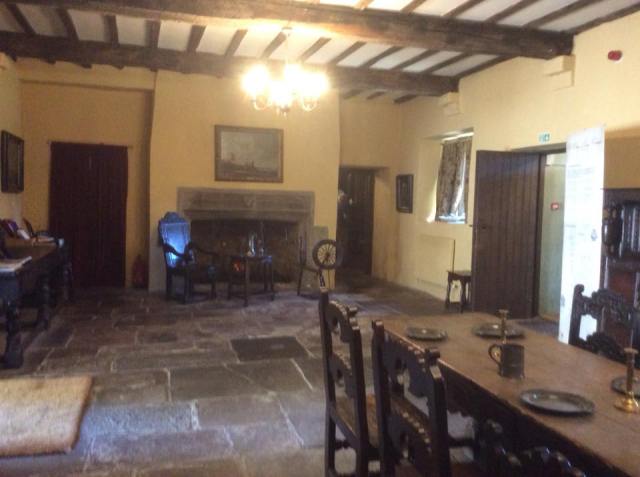 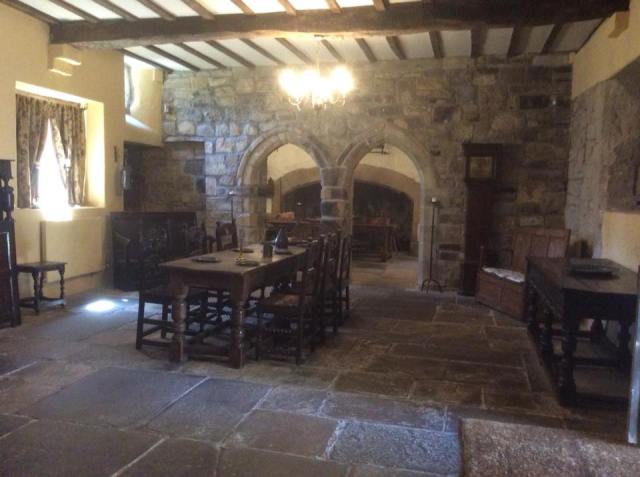 Parts of it remain. The most obvious being the pointed arches at the west end of the Great Hall, which could have been part of a screen passage arrangement connecting the hall with the kitchens.

The branch that produced George Washington came from the marriage in 1292 of Robert Washington, great, great grandson of the first Washington, to Joan de Strickland of Sizergh Castle in Cumbria. 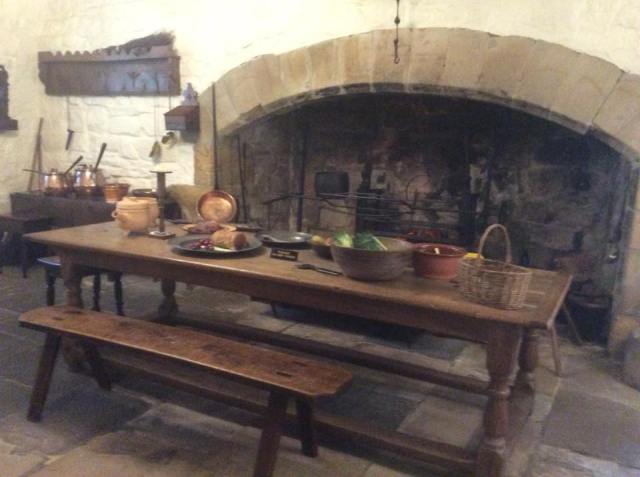 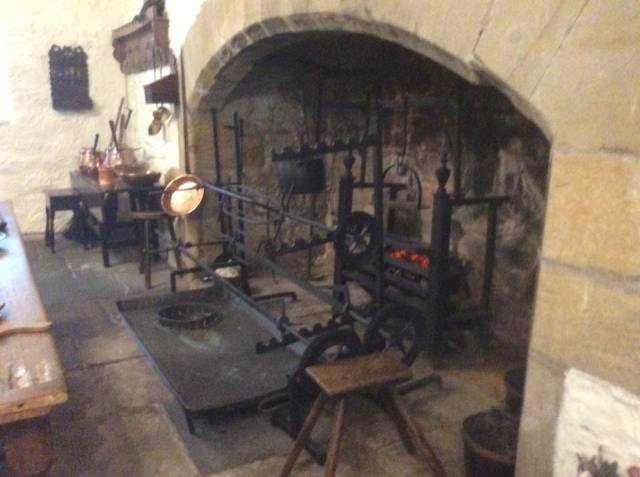 The Washingtons were real meat eaters! 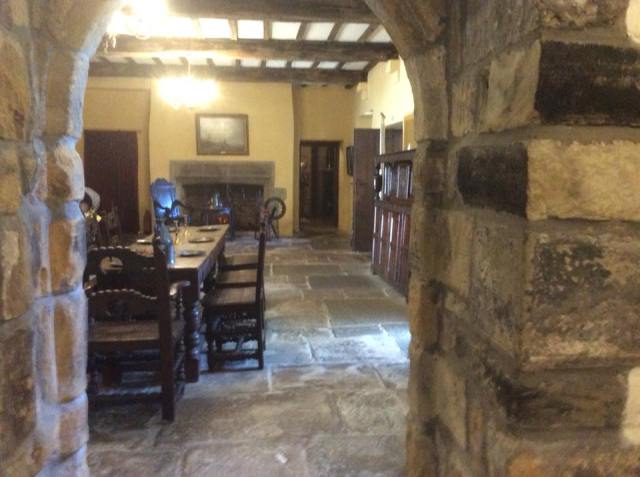 In September 1304, Edward I visited Washington on a return journey from Scotland cementing the family’s status during the medieval period.

Soon after, the family adopted a new coat of arms which was in use by 1346.

The arms featured two bars (stripes) and three mullets (stars) in red against a white background and remains of this appear to be carved in stone on the west front of Hylton Castle, three miles from Washington Old Hall. 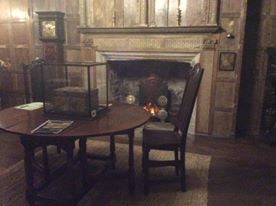 The senior branch of the Washington family continued to live at Washington until the death of William in 1399.

His heir was his only child, Eleanor, who before 1402 had married Sir William Tempest of Studley Royal in Yorkshire. 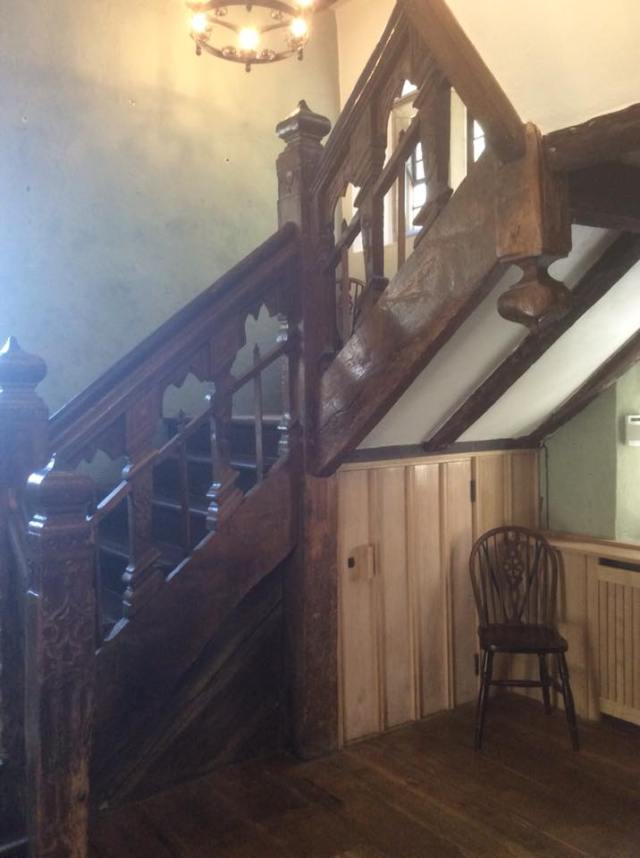 Through the marriage of their daughter Dionisia, Washington came into the hands of the Mallory family.   The house continued in private hands well into the 20th century though by then it had become a building of multiple occupation with entire families living in much more than a room each. 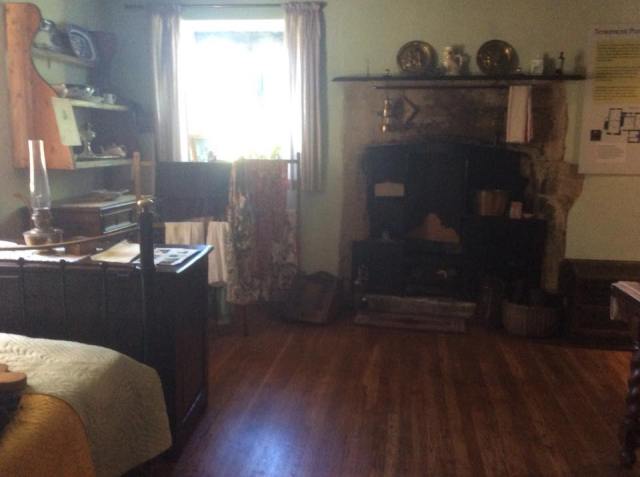 These photos above and below give an idea of what it was like in Washington Old Hall before it was restored by the National Trust.  Am I the only person who still dries clothes on a clothes horse like the one above? 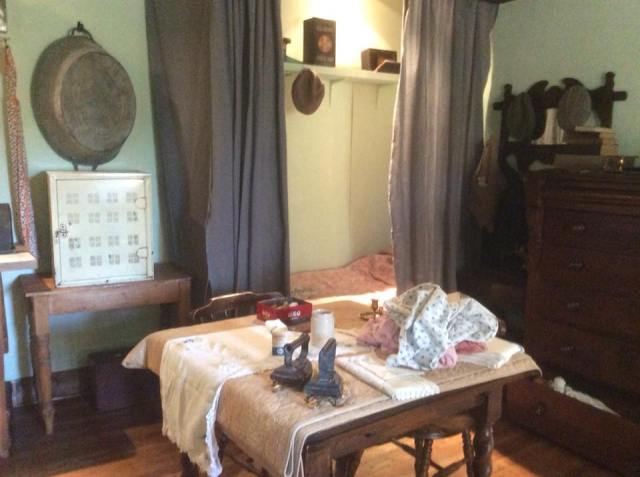 Outside, the Old Hall is situated in a beautiful old village with stone buildings and mature oaks everywhere and the area around Washington Old Hall itself has a modest (by stately home standards) garden. 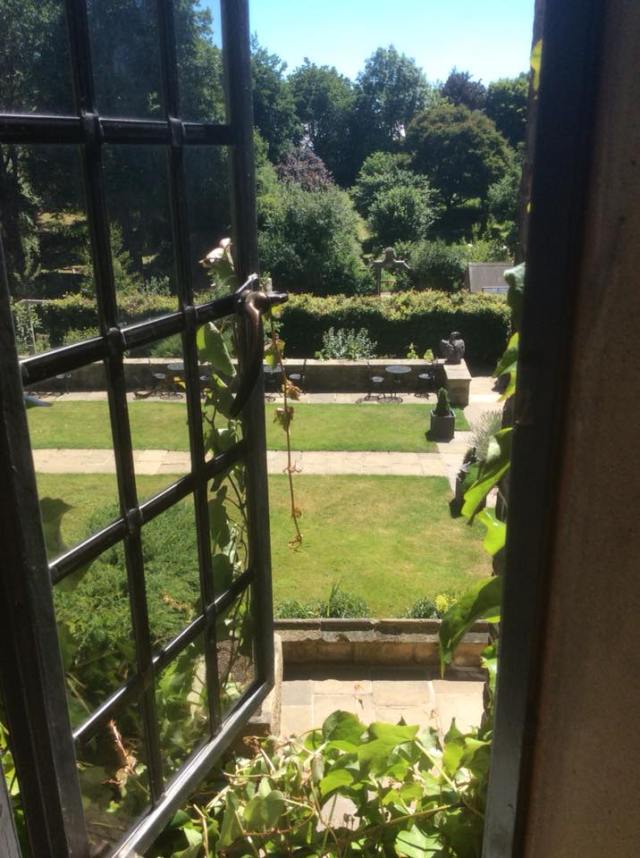 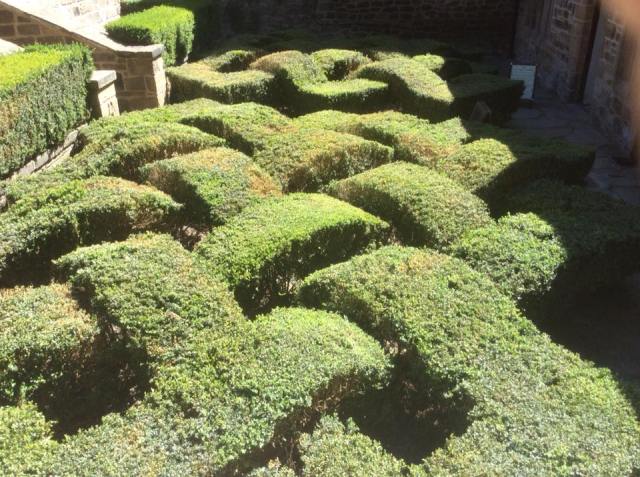 As well as formal areas of the garden they have a nuttery and a large area which is a haven for wildlife with a beehive or two full of activity when I was there. 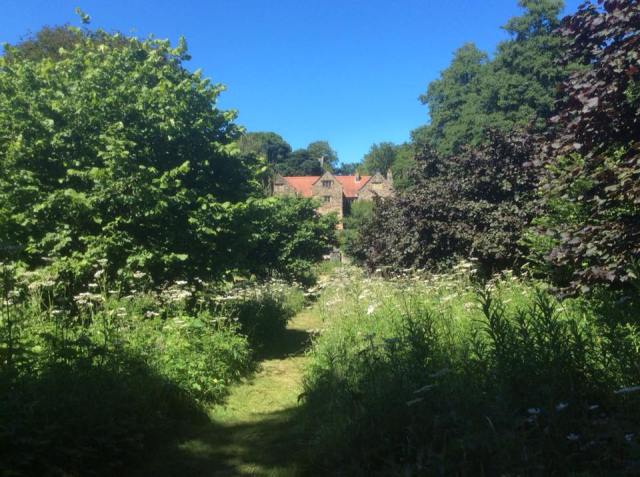 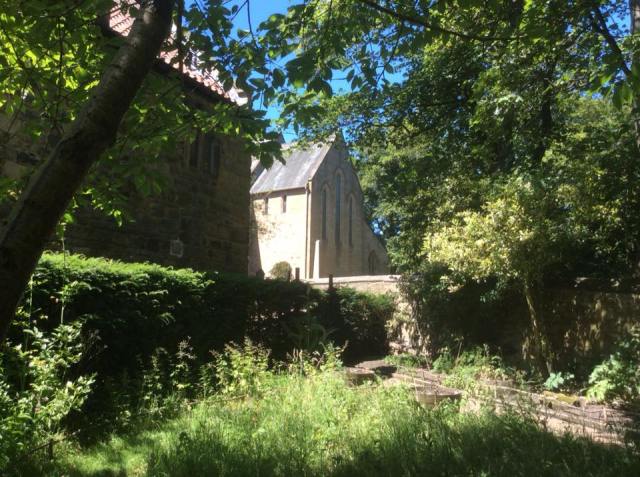 In the old garden from the Middle-Ages with the church in the background.

The building and gardens have been well restored over recent years though parts of the gardens are still slightly at a work-in-progress stage.  I had the opportunity to talk to two of the gardeners who were hugely knowledgable and enthusiastic. 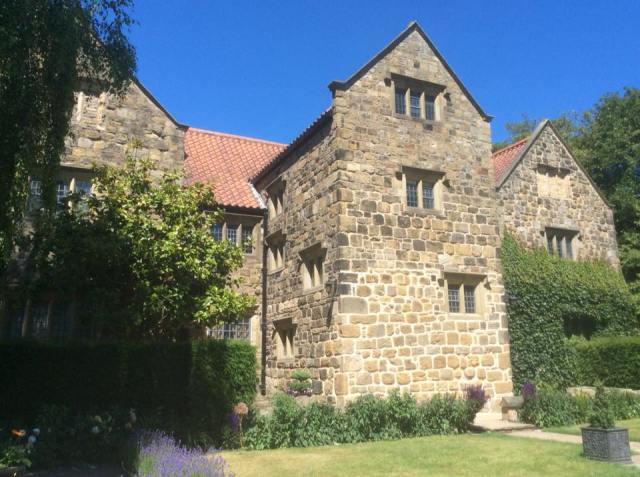 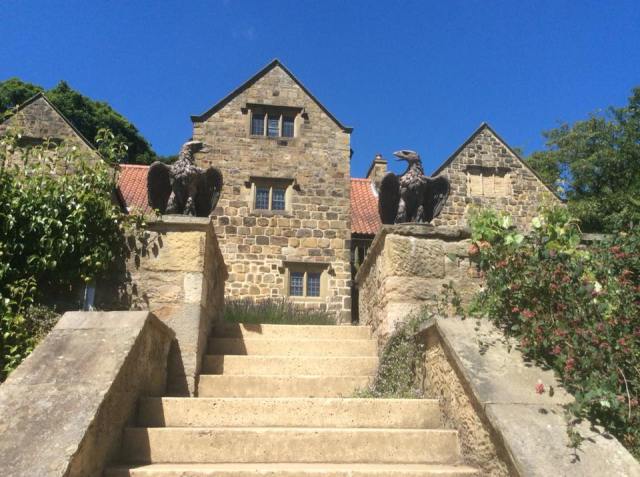 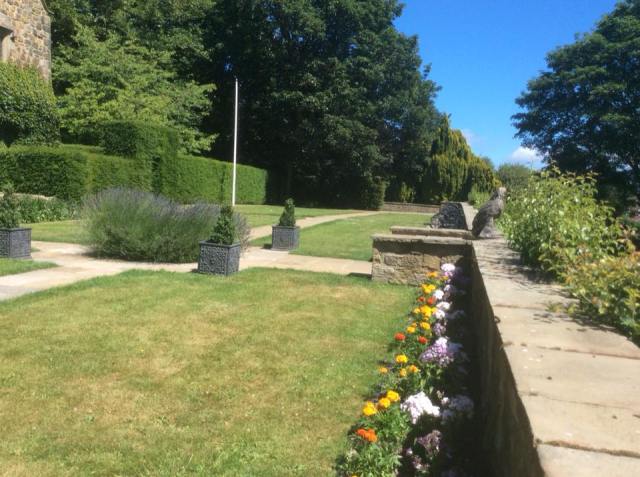 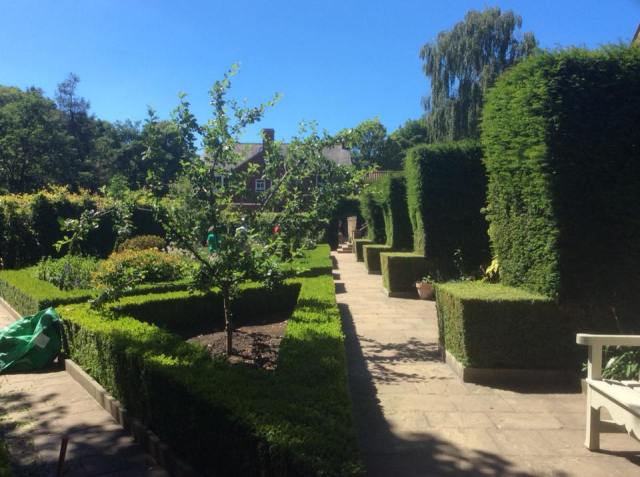 Washington Old Hall is quite hard to get to without a car and no-one else I had talked to in the area had ever been there and neither have any American tourist I have ever met.  But if you make the effort, then it is a great place to while away a few hours and you might be surprised at what you’ll find. 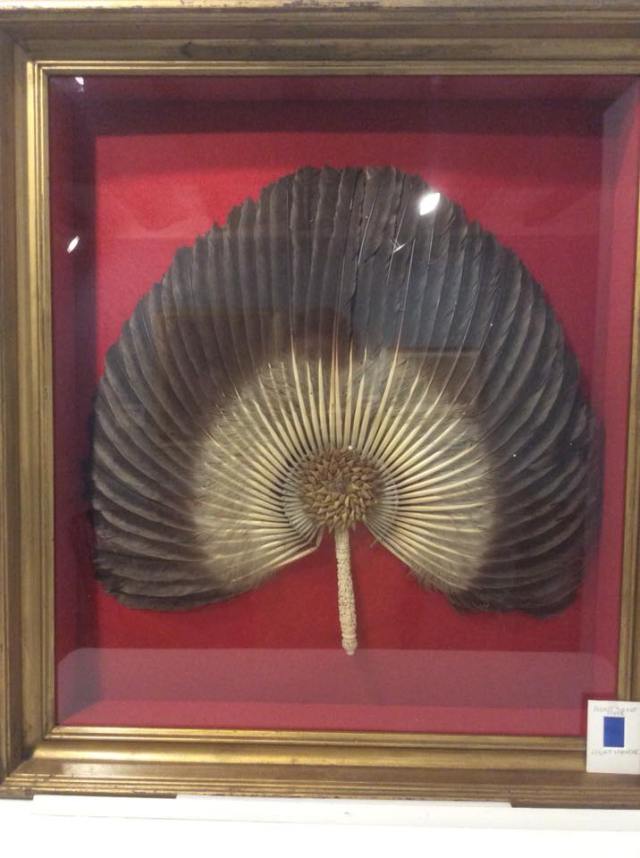 A fan that belonged to Martha Washington.

I am a writer and traveller with a penchant for history and getting off the beaten track. With several books to my name including several #1 sellers. I also write environmental, travel and history articles for magazines as well as freelance work. I run my private tours company with one tour stated by the leading travel website as being with the #1 authentic London Experience. Recently I've appeared on BBC Radio and Bloomberg TV and am waiting on the filming of a ghost story on British TV. I run my own private UK tours company (Ye Olde England Tours) with small, private and totally customisable guided tours run by myself!
View all posts by Stephen Liddell →
This entry was posted in Heritage, history, Life, Northumberland and Durham, Travel and tagged Gardens, George Washington, national trust, USA, Washington, Washington Old Hall. Bookmark the permalink.