William Lenthall -The man who risked his life to uphold democracy and defy the King.

Not many people are familiar with William Lenthall but if history were fair then we all would be.  For William Lenthall was once the Speaker of the House of Commons and by his actions changed the course of the world forever.

On 4 January 1642, King Charles I entered the House of Commons to arrest five Members of Parliament for high treason. The MPs were Mr Holles, Mr Pym, Sir A Haslerig, Mr Hampden and Mr William Strode.  The King believed that these MPs were plotting against him and it is likely they were for Charles I was on the more tyrannical side of monarchial rule.

William Lenthall – Speaker of the House of Commons

Sadly for the King, the Five Members had already fled, no doubt tipped off by the larger number of soldiers arriving and the Palace of Westminster being something of a maze, their must have been many escape routes.

King Charles entered the chamber and took the seat of Mr. Speaker

Gentleman I am sorry to have this occasion to come unto you….

The King demanded to know the whereabouts of the politicians.  What happened next was not only an act of supreme bravery but one that changed the course of history. Speaker Lenthall refused to give away their locations and instead rplied to the king thus:

May it please your majesty, I have neither eyes to see nor tongue to speak in this place but as this house is pleased to direct me whose servant I am here; and humbly beg your majesty’s pardon that I cannot give any other answer than this is to what your majesty is pleased to demand of me. 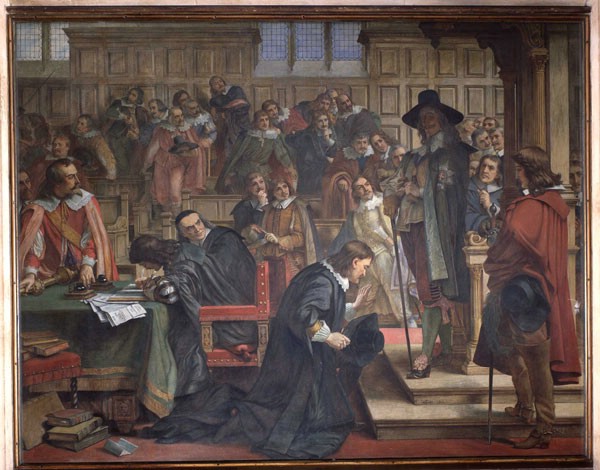 This painting shows King Charles I standing by the chair of the Speaker of the House. William Lentall gives him due honour whilst simulataenously defying the King.

In effect William Lentall was telling the Charles I that the King had no authority in the House of Commons and that he was answerable only to the elected Members of Parliament.

Obviously this could very easily have resulted in the death of the Speaker but as it happened, a furious King Charles I immediately left Parliament empty handed and so the country was about to be plunged into Civil War between supporters of the King and supporters of Parliament.

Ever since this day, no monarch has ever entered the House of Commons and these events are still remembered every year in the State Opening of Parliament.

We might not know the name of William Lentall but in the fine traditions of the Magna Carta, Wat Tyler, Simon De Montfort and many others figures in our history, he he helped inspire revolution, freedom, liberty and democracy in France, the United States and around the world.

I am a writer and traveller with a penchant for history and getting off the beaten track. With several books to my name including a #1 seller, I also write environmental, travel and history articles for magazines as well as freelance work. Recently I've appeared on BBC Radio and Bloomberg TV and am waiting on the filming of a ghost story on British TV. I run my own private UK tours company (Ye Olde England Tours) with small, private and totally customisable guided tours run by myself!
View all posts by Stephen Liddell →
This entry was posted in history, London, Politics and tagged Civil War, Democracy, House of Commons, King Charles I, Mr. Speaker, Parliament, Speaker of the House, William Lenthall. Bookmark the permalink.

6 Responses to William Lenthall -The man who risked his life to uphold democracy and defy the King.