Kindness From Strangers When Travelling

How do you like to travel?   Despite spending my time providing all-inclusive tours in London and around the U.K. when it comes to travelling myself, I really like to rough it with the locals.  Though I can understand the attraction of having everything sorted in a foreign country, I always like to experience the country that I’m travelling it.

Part of this is due to my travel budget, part of this is because I never do resort holidays and generally start off in one part of a country and then exit from an entirely different area or indeed different country altogether.  I just like seeing every day life and spending lots of money to stay in a British or American style insulated hotel isn’t for me, for that I would just stay at home.

A new TV show is featuring a pair of travellers from London who are aiming to travel across the entire continent of South America without any money whatsoever.   This is surely taking the kindness and hospitality of strangers to an extreme but I think generally speaking, people all over the world are kind and helpful to strangers.  I know when I am in London, I am forever giving people directions, helping mothers with their babies, prams and pushchairs or older people with heavy luggage, even carrying it for them if they are that trusting.  My only negative experience with doing this is seeing that more people don’t actually volunteer until a desperate person asks for help and often that person won’t ever ask for help.

Until relatively recently hitch-hiking was a common sights across much of the world though in many parts this doesn’t happen so much.  I still try and do my bit though and have given lifts to all manner of interest people and they were all grateful for the ride.  More than once I have picked up old people at the post office or bus stop if they look cold or are carrying heavy items and offered them a life.  Every single one of them has said yes, despite them never having met me before.  So either everyone is a lot more trusting than the media makes out or I have a friendly and honest demeanour, hopefully both are true!

I know I have benefitted from the kindness and helpfulness of strangers countless times.  Yes there was the time in Paris when a gang tried to mug me in a cemetery but a determined run and the assistance of a local in sorted everything.

I remember the first day of my first trip to backpack across Egypt.  Unbeknownst to me, my wallet has falled out of my pocket when I was exiting the taxi.  I only realised 5-10 minutes later when I was checking into the hotel.  I was devestated as I had lost £300 pounds which to a recent graduate was a fortune.   It is probably not much of an exaggeration to say that the lucky person who found it had probably found several months of even a years worth of money.  Then, minutes later a little 5 year old boy ran into the hotel with his Dad standing at the doorway.  He had seen my wallet fall out and had retrieved it for me, with all the money and documentation totally untouched.     Yes people in Egypt haggle a lot and it is quite a boisterous and terrible poor country but how can I think anything bad when my holiday of a life-time was rescued from disaster before it had even begun.

On another trip, my wife and I were getting the train from Berlin to Prague.  Surprisingly given the high reputation everyone has for Prague, we both sadly didn’t have a great opinion of the place or most of the people which was both a surprise and a disappointment.  However, that one time we needed it, a lady came to the rescue.  Our trains had been mega delayed, my wife was ill and our hotel had been flooded out.  We got on a bus but was it the right on? Not speaking a great amount of Czech ie none, not knowing at all where the hotel was, what stop to get off at and no-one seemingly able to speak English, it could have a been a disaster.   By good fortune and a bit of skill, I had found the right bus but could still only estimate our exit point within a few miles which was not much help carrying big backpacks around.  Happily, a lady heard us talking and she not only told us which stop to exit the bus but also pointed us exactly in the right direction. 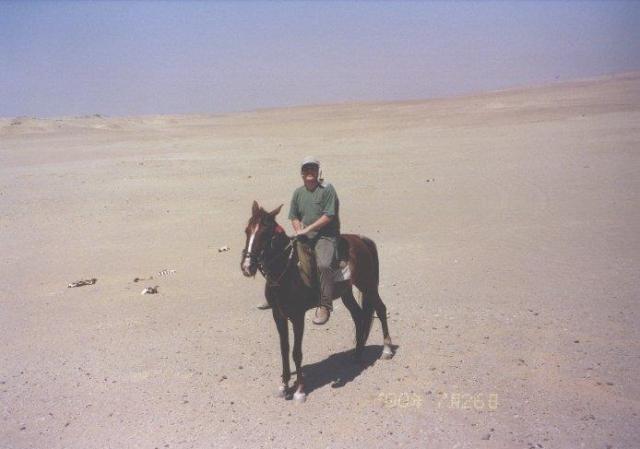 My ride through the Sahara.  Notice the animal bones in the backround!

One of the great things about travelling independently are those passing meetings and moments you have with locals and fellow travellers.  I often think of such people I have met and wonder what they are doing, if they know how grateful I am or chuckle about a shared experience with equally needy traveller.    There was one Swedish/American chap who I met in the desert on the border with Iraq in Jordan.   We were both at what would be called a caravanserais, a 12th century traffic refreshment and layover point.  Except the only refreshments were years old and very hot coca-cola and the only place to rest were two inch thick (2cm) old mattresses under a plastic tarpaulin roof tied to the ruins of the old stone walls.  There was a bedioun man who lived in the ruins and I was going one way and he was going another. We were both going in opposite directions and problematically for him, he was due to catch a ferry from ‘Aqaba in just 12 hours time and had no money, no transport and no luck.  We chatted a while and I gave him some money, he gave me a book and after I bought us both some burning hot coke, the old man disappeared and brought out all the food that he had, touched as he was that I had bought some of his worthless drinks and that I had helped out a traveller just as the little boy a few weeks earlier had helped myself.

I don’t have a photo of the Caravanserais groupies… it was complicated.  This though was where I was heading to, Azraq Castle where Lawrence of Arabia spent a winter.

It was a wonderful moment and we all ended up helping each other.  I soon had to leave however as I was going up towards Syria and my known companion was heading in southwest.    I have no idea if he made his vital connection, I have to think he would despite it being a hopeless situation as that is how things go when you open yourself open to the kindness and help of locals and travellers alike.  Even if he didn’t I am sure that all these years on, he as no regrets.

I have so many of these tales that I could write countless posts but why don’t you tell me some of yours? 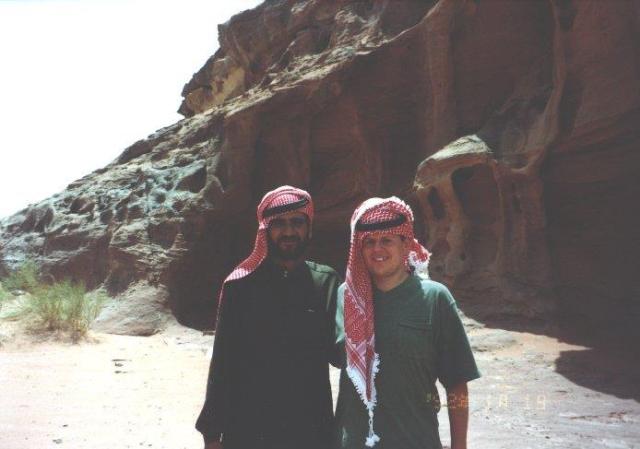 Muhammed and I.  It was over 60 degrees Celsius 140 Fahrenheit and I had got sunstroke/water poisoning.   Muhammed actually took me to a hidden cool cave with water pools and gave me his “head-dress” as I was adopted into his family and tribe.  It was a very special few days.

If you want to read about some of my travels, why not check out my travelogue which is available on Kindle, Ibooks and Paperback.  Trains Planes and Sinking Boats.

I’ve been to holiday hell so you don’t have to!

I am a writer and traveller with a penchant for history and getting off the beaten track. With several books to my name including several #1 sellers. I also write environmental, travel and history articles for magazines as well as freelance work. I run my private tours company with one tour stated by the leading travel website as being with the #1 authentic London Experience. Recently I've appeared on BBC Radio and Bloomberg TV and am waiting on the filming of a ghost story on British TV. I run my own private UK tours company (Ye Olde England Tours) with small, private and totally customisable guided tours run by myself!
View all posts by Stephen Liddell →
This entry was posted in Life, Travel and tagged Egypt, Help, Jordan, Kindness, Life, Prague, Travel, Travelogue. Bookmark the permalink.

9 Responses to Kindness From Strangers When Travelling