Not many people know about Grace Darling today but 175 years ago her fame hadn’t just spread around the land but around the world and with good reason. 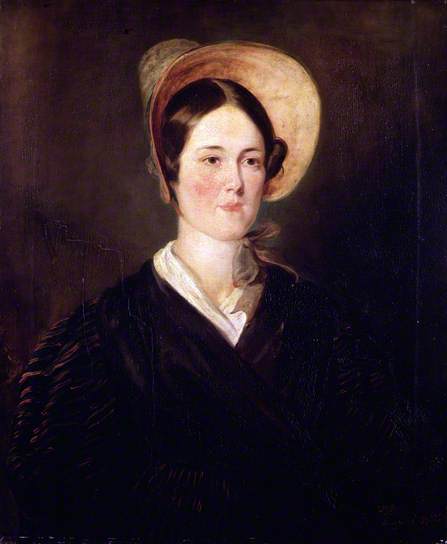 Grace was the daughter of William and Thomasin Darling, just one of nine children born into the family in the early 19th century.  Aged just a few weeks old, they left their tiny cottage in the Northumbrian village of Bamburgh to the remote and desolate Brownsman Island and then the nearby Longstone island, one of the Farne Islands off the east coast of England near the Scottish border.

The Farne Islands lie off the coast of Northumberland in the North Sea. Map is Crown Copyright

Her father had been running a lighthouse and was paid £70 plus a £10 bonus each year but for that the family had to spend their time in a lonely isolation with William having to row back to the main land to purchase even the most basic of commodities.  The family would all live in the main room on the ground floor and then sleep in the three bedrooms up the winding staircase.

The Farne Islands are in the North Sea, a treacherous and cold sea even in the summer time and the conditions are well-known to switch from a calm to mountainous waves in just a few hours.  In the early hours of 7th September 1838 Grace looked out of the window to see a ship that had been wrecked upon the nearby rocky Big Harcar island. It was the Forfarshire, a large paddle-ship, and a terrible storm had blown it against the rocks and broken the ship in half with half of it having already sank during the night joining the many hundreds of ships that had met their end on the islands.

Knowing the seas as they did, Grace and her father William determined that it was far too perilous for the local life boat to put out from Seahouses, the nearest mainland rescue centre and so instead endeavoured to row out over a mile in the stormy conditions amongst islands and jagged rocks in a small 21 foot 4-person wooden Northumbrian boat known as a Coble.

Finally they reached the site of the wreck and William Darling clambered onto the low-lying rocky island leaving Grace to single-handedly keep the tiny wooden boat near the island whilst ensuring it didn’t smash against the rocks.  It should be remembered that her boat was designed for 4 burly men on a relatively calm sea and not one young lady barely out of her teenage years battling one of the biggest storms of the year just after daybreak.

The pair had already risked their lives just by venturing out in the first place and one wrong move would have seen the boat rip apart and no doubt costing all their lives.  Somehow though, Grace held it together and her father William managed to shove 4 men and the only lady survivor of the ruined Paddleship, a Mrs Dawson whose two young children had died in the accident.

William and three of the male survivors rowed back to the lighthouse and dropped off Grace, Mrs Dawson and another survivor before William and the three others rowed back and rescued 4 more survivors.    By now an attempt was made by the Lifeboat at Seahouses on the mainland to effect a rescue but all they found were the bodies of Mrs Dawson’s children and that of a vicar.

The bad weather became worse still and the Seahouses Lifeboat was forced to seek safety at the lighthouse and the storm was so great that all were trapped inside for 3 days until the seas calmed sufficiently for a trip to the mainland to be attempted.

The Forfarshire had been carrying 62 passengers, all those that had been rescued were from the bow section of the ship which had been held above water by the rocks for some time.  9 others managed to get away on a ships lifeboat but that little craft sank in the storm but thankfully rescued by the crew of a passing Montrose Sloop and taken to South Shields that same night.

News of the rescue and Grace’s pivotal part in it hit the news almost overnight.  Her bravery and yet simple virtuous life-style made her an exemplary heroine.  She received donations of £725 including £50 from Queen Victoria herself (and £175 for her father), artists from all over came to paint her likeness and she received letters, gifts and marriage proposals from around the world.

Her fame and wealth were so great and so unexpected that the Duke of Northumberland offered to managed her funds and investments though in truth Grace remained a quiet and unassuming young lady.

In 1842 the young Grace was visiting her cousins in the nearby market town of Alnwick on the mainland when she fell ill.  The Duchess of Northumberland arranged for her to be given the best accommodation in the town and the best medical attention money could buy. Sadly though Grace only got steadily worse and when it became clear that she was not going to recover, she returned to her family cottage by the sea in Bamburgh.  In October 1842, just a few years after she saved so many lives, she died of Tuberculosis aged just 26. 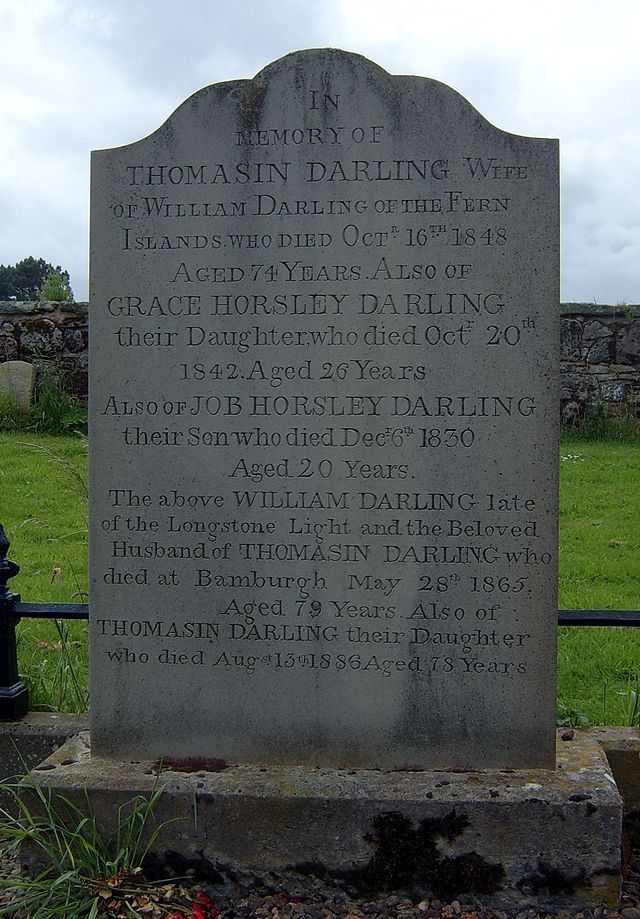 The grave of Grace Darling

Grace is buried in a plain grave with her parents in St Aidan’s churchyard in Bamburgh.  There is also a fine Victorian memorial to her in the cemetery as well as a memorial to her in St Cuthbert’s Chapel on Great Farne Island.  Grace is immortalised in a number of fine paintings and songs with William Wordsworth also writing a poem about her and Cadburys even featured her on the covers of their chocolates.  Bamburgh has the Grace Darling museum and the local RNLI Lifeboat at Seahouses sports the name Grace Darling.

It’s well worth the visit to see the Grace Darling memorials though a long, long way off the beaten track for most international visitors.  The whole of Northumbria is covered in the most ancient churches, magnificent castles, roman and viking ruins.  I remember visiting this churchyard just a few years ago and there were tombs of crusaders and even at least one pirate

It is sad to think that poor Grace died at such a young age and so soon after her brave heroics but her modesty, bravery, memory and inspiration was an example to women everywhere and whose spirit lives on in the unpaid volunteer lifeboat staff of the RNLI who risk their lives for those in peril on the sea.

I am a writer and traveller with a penchant for history and getting off the beaten track. With several books to my name including a #1 seller, I also write environmental, travel and history articles for magazines as well as freelance work. Recently I've appeared on BBC Radio and Bloomberg TV and am waiting on the filming of a ghost story on British TV. I run my own private UK tours company (Ye Olde England Tours) with small, private and totally customisable guided tours run by myself!
View all posts by Stephen Liddell →
This entry was posted in Heritage, history, Life, Northumberland and Durham and tagged church, Farne Islands, Grace Darling, Hero, Heroine, history, Life, North Sea, northumbria, RNLI, Victorian. Bookmark the permalink.