The Most Powerful Women in History 5 – 1

Posted on December 2, 2020 by Stephen Liddell

Following on my post on the first 5 of the most powerful women in history, here is the final part.

5. Theodora (500-548) was a highly influential Empress of the Byzantine Empire and a saint of the Eastern Orthodox Church. Married to one of the most notable figures in history, Emperor Justinian I, she was his most trusted advisor and used him to reach her goals. She controlled foreign affairs and legislation, violently put down riots, and, notably, fought for the rights of women, passing anti-trafficking laws and improving divorce proceedings.  She sounds like a woman ahead of her time.

4. Catherine the Great (1729-1796), also known as Catherine II, was undoubtedly one of history’s most famous women.  I have to admit I found it hard to decide who deserved a higher ranking between Catherine the Great and Maria Theresa.   Born in Poland, as a German princess, Catherine attained rule of Russia through marriage and held on to it for 34 years.  In fact she even overthrew her husband and took complete control! She is responsible for continuing Peter the Great’s work in modernising Russia, bringing it more in line with the West’s Enlightenment ideas. She also defeated the Ottoman Empire in two major wars and greatly expanded Russia’s Empire over three continents (including the colonisation of Alaska). She made legislative reforms, put down the dangerous Pugachev Rebellion and was known for a risqué personal life. Her rule is regarded as the Golden Age of the Russian Empire. 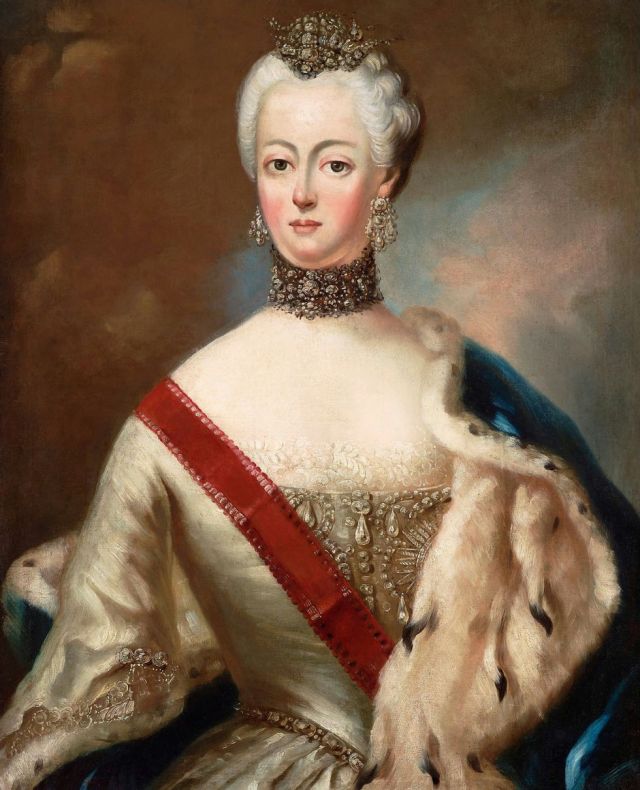 3. Maria Theresa of Austria (1717-1780) was a Hapsburg Empress.  The Hapsburgs are largely forgotten about now in much of the world but Maria reigned for 40 years and controlled a large part of Europe, including Austria, Hungary, Croatia, Bohemia, and parts of Italy. She had sixteen children, who also became key power players like the Queen of France, the Queen of Naples and Sicily as well as two Holy Roman Emperors. Empress Maria Theresa is known for her reforms in education like making it mandatory, establishing a Royal Academy of Science and Literature in Brussels, and supporting scientific research. She also raised taxes and made reforms in commerce and doubled the size of her army.

2.Elizabeth I (1533-1603) was one of most powerful English monarchs ever and some similar lists actually have Queen Elizabeth I down as the most powerful woman in history.  The daughter of the powerful and infamous King Henry VIII, she never married and is known as the “Virgin Queen,” as well as being incredibly savvy in the intellectual department. Elizabeth I defeated the Spanish Armada and ruled successfully for so long that her reign from 1558 until 1603 is known as the “Elizabethan Era”. As a monarch, the last of the Tudor dynasty, she encouraged major cultural changes like the Renaissance and the transformation of England into a Protestant country as well as the real beginnings of the modern day Royal Navy, voyages of discovery and the Empire.

1. Queen Victoria (1819-1901) was the Queen of the United Kingdom, ruling over a vast British Empire that stretched across six continents for 63 years, the second longest reign in its country’s history (the longest belonging to the current Queen Elizabeth II). Her rule was so definitive that the period has come to be known as the “Victorian Era”. Under her rule, slavery was abolished throughout all British colonies and voting rights granted to many British men. She also made reforms in labour conditions and presided over significant cultural, political, and military changes in her Empire that laid the groundwork for much of the modern world as we find it today not to mention scientific, engineering and medical breakthroughs.  For me there can’t be any one close to her though of course Queen Victoria was very similar to the current Queen with much of the real power held by Parliament whilst Queen Elizabeth I enjoyed it more in person.

Perhaps the most powerful woman the world has ever seen. Queen Victoria looking regal yet vulnerable after 60 years on the throne of the British Empire.

I hope you enjoyed my run through some of the most powerful women in history.  I find it a little ironic that the USA which considers itself the most democratic nation has not managed to have a female leader in almost 250 years.  Will they manage it next time?

I am a writer and traveller with a penchant for history and getting off the beaten track. With several books to my name including a #1 seller, I also write environmental, travel and history articles for magazines as well as freelance work. Recently I've appeared on BBC Radio and Bloomberg TV and am waiting on the filming of a ghost story on British TV. I run my own private UK tours company (Ye Olde England Tours) with small, private and totally customisable guided tours run by myself!
View all posts by Stephen Liddell →
This entry was posted in Uncategorized. Bookmark the permalink.

7 Responses to The Most Powerful Women in History 5 – 1