I saw a sad, kind man headline the national news yesterday and I cried for he was me.

As many of you will know I’ve spent much of the last 6 months complaining, badgering, writing, harassing and generally making a nuisance of myself to the government in a polite and sarcastic fashion that is uniquely mine.

I’m sure you all here know I run a little tour company called Ye Olde England Tours and not only have there been no tourists so no income but I’ve been excluded like 3 million others of out the 68million or so British citizens from receiving any government help whatsoever.

However we all know that whilst they say they care, they totally don’t.  And it’s not just the government, the Labour Leader Sir Keir (you always know the party of the working class is representative when it is led by a Knight of the realm!!) has not once raised the issue in Parliament and I don’t recall seeing any major front bench figure from either side doing so.

It’s no different in Scotland where the progressive Nicola Sturgeon bashes London several times a day has also failed to do anything for similarly impacted people in Scotland and has also not replied when I’ve messaged her to support suffering people there.

There are big protest groups on the internet called ExcludedUK, ForgottenLTD, ForgottenPAYE and other very worthy and similar groups.  On Sunday I made a very modest post on the ExcludedUK facebook page and was astounded to receive about 250 comments back.

One of those who contacted me is a journalist and television presenter and is campaigning for parity not charity is Ellie Phillips.  I’d been approached by national newspapers a few weeks ago but I was worried by their take on the subject but I knew Ellie was genuine and passionate and actually felt sorry for me as a person rather looking for a good story.

I helped in a small way for  little video for the #MindTheGaps charity campaign that Ellie was arranging and she contacted Sky News and it was arranged for the lovely reporter Ivor Bennet and Alex doing the lights, sound and camera to come round.  Within an hour of hearing from Sky News on Monday afternoon, we were doing a 20 minute chat in my garden.   It went so well that the piece was extended and yet the content was narrowed so as not to overpower audiences and to concentrate the message on one theme though of course there are many that come with being in social isolation without pay or state help for 6 months.

It was actually too sunny to film well so we had to go in the shade!

Obviously no-one wants to go on television and make their bad luck international news but I feel very strongly about the 3 million people who are in a similar position to me.  I’m sure not everyone is affected the same way and it really doesn’t matter to what extent people are suffering; if it is senseless and can be easily avoided then it’s wrong and if it takes letting the world know what should be obvious that a tour guide with no tours for 6 months isn’t going to be doing very well on top of the general chaos and suffering going on right now then so be it.  In fact my company name wasn’t mentioned by myself or anyone else as it’s not about me but about everyone.

Mission Accomplished with the lovely Ivor and Alex

Ivor and Alex were really nice and were obviously sad and angry by it all and were very grateful for me volunteering to jump into the lime-light in a not very nice way.  I was later told the government were investigating my situation before deciding to inform us that they do no comment on specific cases (indeed they don’t even comment on my case when I write to them) before spewing forth the tired lines about helping more people than ever before etc etc but of course the whole point of this was how about the people who aren’t being helped in any way shape or form?

Apart from all the exclusions they don’t even mention here… the gaps in support are obvious even in the above.

As with the previous night, I only slept 3 hours.  It was a little surreal but actually not unpleasant, I’ve had so many worse things in life, even in the last week or two than knowing all hell was going to break loose.  Nevertheless it was a surreal moment when at 6am I opened the National News and then something strange happened.  At 6.03am I got a message from a lovely stranger in Ireland.  It was the first of many, well over 1,000 on Facebook, Twitter, Instagram, email, telephone.  I have not yet checked out the pigeons in the garden but I’m sure there is a message on one of their feet.

Hello you… 6am with my widely acclaimed lock-down hair.

The messages are still coming now, about 15 since 8am and it’s 8.22am as I type this line. Everyone saying thank-you for providing publicity and saying the things they’d want to say but couldn’t.  I’m not sure if I’ve been called brave before and definitely not a hero but hundreds of people have said that now and I was told by someone behind the scenes that they think I have helped countless thousands of people just yesterday alone, let alone generally speaking.

I also got sent lots of abuse, hate and well-wishers cheering on my death which is always one of the high-points of any day I’m sure you’ll agree.

It was very strange being on television every hour or even more frequently and then having university Doctors and Professors, political experts and all sorts debating things around me.   Later the story spread around the world on the internet and news shows and I’ve had people saying how touched they were my by appearances on the radio which I knew nothing about! 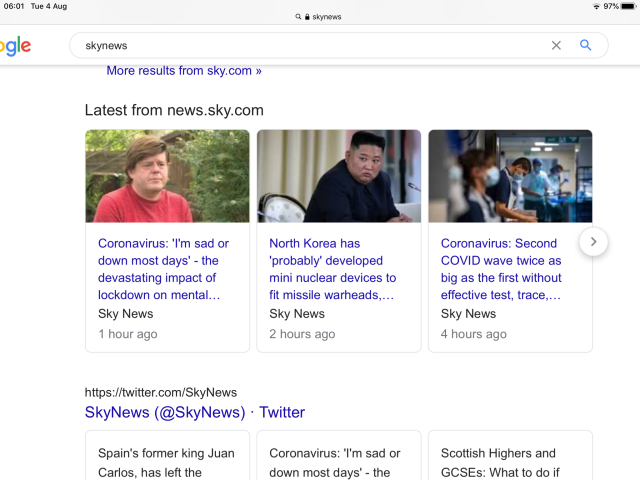 The North Korea looks sad as he realises I am a decade older and with even more and better hair!

At one point I was beating the Spanish King, Kim Il Jung, Nicola Sturgeon, the Royal Family and two other men famous for their hair amongst other things but it all ended of course with the terrible attack in lovely Beirut yesterday afternoon.

Though the video report is no longer currently broadcasting, you can still see the written report here on the Sky News website.

Still I was very glad to do my bit.  My situation may not yet have improved but it’s brought attention to the cause of 3 million suffering and forgotten people at a time that with everything else going on; they shouldn’t have to resort to going to a food bank like I did on Friday, in shoes with holes in them that cut your heels and jeans that let handily let cool air in during the heatwave due to the tears before tucking into out of date baked beans as the millions who’ve been paid to stay at home or indeed lucky enough to work at home enjoy discounted meals out paid for by taxes we have paid that go to large international companies that pay less tax than I do.

To everyone who has messaged me in anyway, thank-you and I will reply to everyone I see though it may take a while 🙂   Thanks especially to Ellie who is fantastic and keeps checking up on me, Ivor and Alex and Sophie the producer at Sky News and the very kind offers people have made.

Last but not least, lots of love to people like this man who do so much to help the cause of mental health sufferers.

Believe me, there is not much that would make me happier than jumping off a bridge in Hull and taking you out through the windshield but for everyone else if you feel similar, please contact The Samaritans.

If you’re also one of the 3 million who have been deliberately left behind by the government look up Excluded UK, ForgottenLTD, ForgottenPAYE or one that meets your situation most closely.   The MindTheGaps fundraising effort can be found at www.justgiving.com/mindthegaps

For everyone else consider writing your MP, political party, or the Prime Minister who can be found at: 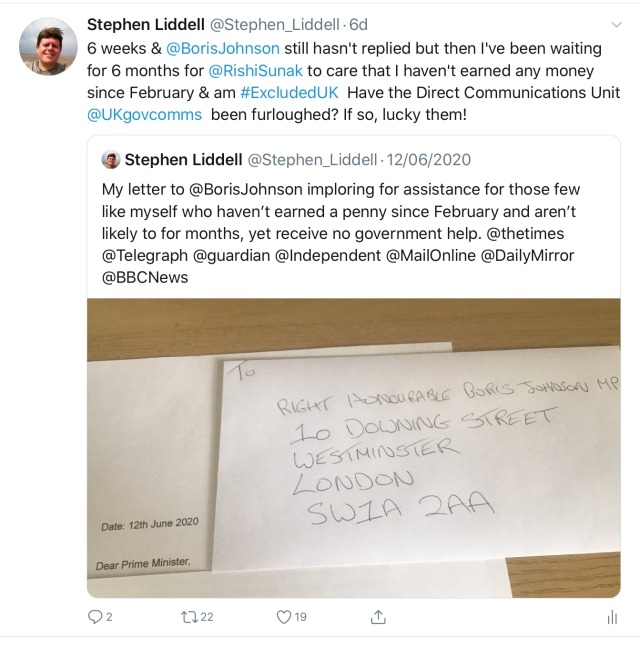 Boris and Rishi will wish they haven’t been ignoring me for months!

Considering I’m so quiet and shy I don’t half an interesting life.  I was always a big fan of Newcastle football legend Alan Shearer who grew up in a village where I lived when I was little.  Even when he was the worlds best goalscorer and England Captain he’d always refer to himself modestly as ‘just the son of a sheet-metal worker’.  I don’t think I’ve done too badly for little me, just a little blogger, historian and tour guide and of course #ExcludedUK.   And I wrote this all on another night of 3 hours sleep too.

Here are just a dozen or two messages of support, Facebook makes it easier to show than the emails, tweets and more private messages.

I am a writer and traveller with a penchant for history and getting off the beaten track. With several books to my name including a #1 seller, I also write environmental, travel and history articles for magazines as well as freelance work. Recently I've appeared on BBC Radio and Bloomberg TV and am waiting on the filming of a ghost story on British TV. I run my own private UK tours company (Ye Olde England Tours) with small, private and totally customisable guided tours run by myself!
View all posts by Stephen Liddell →
This entry was posted in Life, News, television and tagged Boris Johnson, Ellie Phillips, ExcludedUK, ForgottenLtd, ForgottenPAYE, Ivor Bennet, Mindthegaps, Rishi Sunak, Sky News, Suicide. Bookmark the permalink.

5 Responses to I saw a sad, kind man headline the national news yesterday and I cried for he was me.