I’m putting out a little update, many will remember I was on the television and radio around the world in August on several occasions due to having no work since February and the British government excluding me from any support for the duration of the Coronavirus crisis.

From January until October 23rd my income has been only £490 and yet the government doesn’t care one bit despite the entirely obvious impact would have on anyone.

I’ve been asked by a few people to set up a donation page so that I may not be so reliant on food banks and help pay bills, let alone essential issues like my leaking roof or my broken door and window.

I’ve received over 4,000 messages of support since then, in fact pretty much the only people who haven’t offered to help are those responsible for my situation, the British government.

If you’d like to help, you have my sincere thanks and gratitude and you can click on the graphic below. 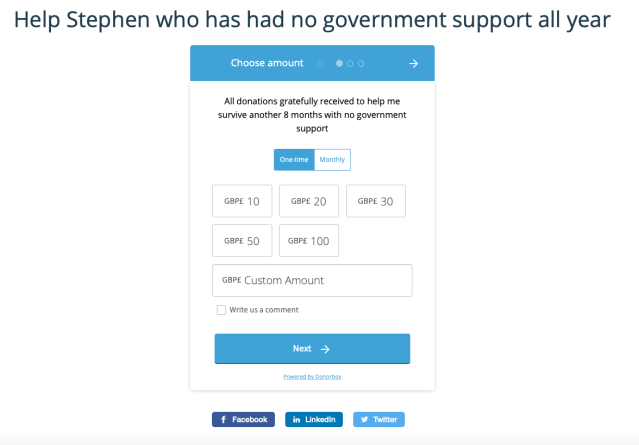 Alternatively you can send a donation through Paypal for which you don’t need an account.  My Paypal address is stephenliddell@gmail.com

I am a writer and traveller with a penchant for history and getting off the beaten track. With several books to my name including several #1 sellers. I also write environmental, travel and history articles for magazines as well as freelance work. I run my private tours company with one tour stated by the leading travel website as being with the #1 authentic London Experience. Recently I've appeared on BBC Radio and Bloomberg TV and am waiting on the filming of a ghost story on British TV. I run my own private UK tours company (Ye Olde England Tours) with small, private and totally customisable guided tours run by myself!
View all posts by Stephen Liddell →
This entry was posted in Life and tagged charity, Coronavirus, Diary, Donorbox, ExcludedUK, Poverty. Bookmark the permalink.