Coronavirus Diary 60: #ExcludedUK Why does my country hate me?

I haven’t worked since February, it’s getting on for 6 months now since I’ve been paid.  Despite the government paying out billions to some fantastically good causes and supporting the overwhelming majority of people, 3 million of us are actually not being supported at all.

We’re not in it together in any way shape or form.  Imagine if you had to face the virus situation and like me are Shielding due to suffering from a chronic lung condition of all things but that on top of that you weren’t receiving a penny.

As an example, here are my sales charts from just one source but they are indicative of my situation and others generally. 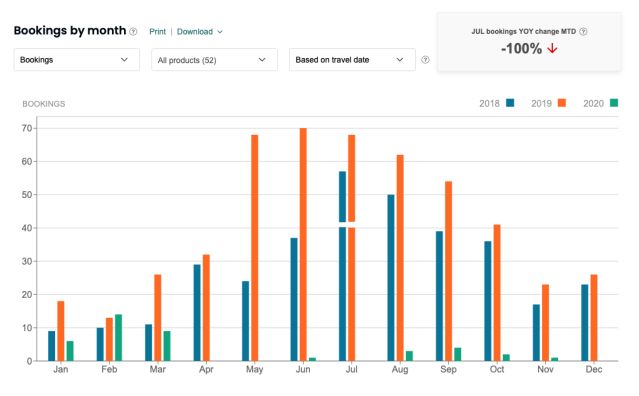 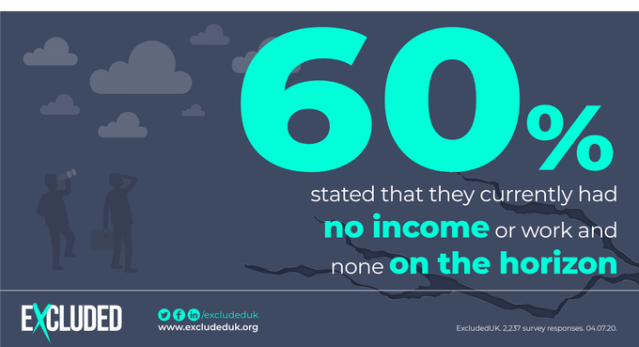 The only people who care are those who are affected and we have coalesced into a pressure group known as Excluded UK.  One of the problems of working for yourself is that you don’t have any influence over anyone.  Big organisations can campaign for very generous financial assistance which they don’t even need whereas people like me don’t matter at all.

And it’s not just the government either, that Labour Leader Sir Keir Starmer who some may remember stating here what a waste of space he would be for many outside the middle-classes of North London has not even raised an issue.   Imagine having 3 million possible votes and they just don’t care. 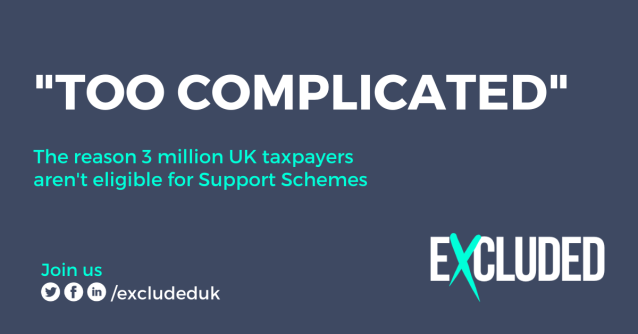 Meanwhile big organisations are being paid £1,000 for every employee they bring back to work even though the overwhelming majority would be doing do anyway. 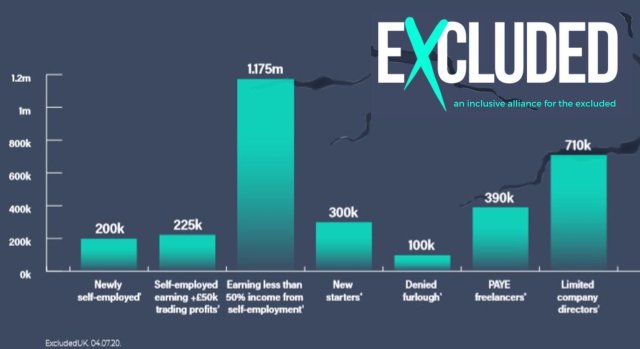 And restaurant-goers are being given £15 off their meals in order to encourage eating-out so effectively my taxes are paying for people who have been receiving thousands of pounds a month from the state to eat out when people like myself have not received a single penny of help from either the state or indeed anyone else.   I think it’s fair enough to feel it isn’t quite fair.

And absolutely nobody cares.  People march and protest for all manner of things, even for injustices from centuries ago and yet today 3 million people in the U.K. are without any income or government support.  ‘Even’ the United States has given payments to its citizens.

I’m not sure if the Chancellor has ever read The Social Contract by Jean-Jacques Rousseau who theorised that a ruler or government doesn’t rule by force or the will of God but by a  Social Contract between the state and the people.   No matter how powerful the state is, if it abuses power and loses the support of ordinary people then it loses legitimacy.   It’s something that can been in democracies and dictatorships to various degrees, even things like Brexit could be argued to be an example.

Well I feel I am very close to having been pushed out of my Social Contract.  Only 6 people on the entire planet have helped me out over these near 6 months.  I help more people than that on an average day out in London.  It would be easy to say that  I don’t care about anyone either any more and why should I if my country and society do not care one bit about me?

I also know that I will never again pay a single penny of tax that I can avoid doing so.  All those cash tips and payments from tourists fresh from the airport who didn’t have time to pre-pay will be spent on cash purchases and luxuries that many take for granted but I have never indulged in rather than dutifully going beyond the pail and recording every little transaction which otherwise would never go discovered.

If the government, country and largely the people have broken their contract with me then in a small way, I can do the same with them.  Despite what has long been said, we are not in it together.  Approximately 65 million people are in it together, the other 3 million of us have been left to rot and die.

I am a writer and traveller with a penchant for history and getting off the beaten track. With several books to my name including a #1 seller, I also write environmental, travel and history articles for magazines as well as freelance work. Recently I've appeared on BBC Radio and Bloomberg TV and am waiting on the filming of a ghost story on British TV. I run my own private UK tours company (Ye Olde England Tours) with small, private and totally customisable guided tours run by myself!
View all posts by Stephen Liddell →
This entry was posted in Life, Politics and tagged Coronavirus Diary, Covid19, ExcludedUK, ForgottenLtd, Self Employed, Self isolation, Social Distancing, Sole Trader. Bookmark the permalink.

17 Responses to Coronavirus Diary 60: #ExcludedUK Why does my country hate me?