An example of how English has changed over 1200 years.

Posted on September 11, 2019 by Stephen Liddell

I found this poster earlier today and thought it was well worth sharing.  The text contains a brief passage of one of the most famous Psalms and I think gives a wonderful insight to how language changes.

I really don’t like the modern version, it sounds almost like it is written for people with learning difficulties.  it gives the message but is so perfunctory and has no beauty or warmth.

The second version is the one I am most familiar with.  The King James Bible is widely recognised as being a work of art regardless of whether one believes in the message it offers. 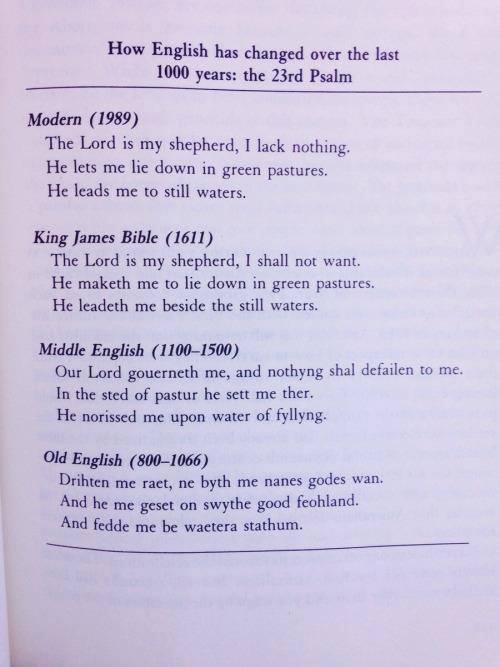 The third example is written in Middle English which though complicated to us, is much simplified compared to what came before it.  One can definitely understand it relatively easily particularly when you remember that back then sometimes the letter V was written as a U and a S could be an F.   Middle English is of course the language of Chaucer and his Canterbury Tales but sadly there isn’t that much Middle English around, partly because of the Norman invasion and the resulting cultural and linguistic changes. Interestingly J R R Tolkien was a scholar of Middle English, one of many reasons why the Lord of the Rings is such a wonderfully rich world.

The final iteration is in Old English which really is the language of the Anglo-Saxons.  My forebears would have readily understood this.  I have to admit this is much trickier to readily understand but I find if you read it out loud phonetically then it is easier to make sense of, particularly if you compare it with the more recent texts.

The map above shows the differing Germanic based languages during the Anglo-Saxon period.  Interestingly I’ve seen documentaries where elderly people in the different parts of Britain can communicate with elderly people in parts of Scandinavia, the Low Countries and Brittany.

The four main dialectal forms of Old English were Mercian, Northumbrian, Kentish, and West Saxon with Mercian and Northumbrian together referred to as Anglian or English.

Perhaps the most famous and widely read example of Old English is the fantastic story Beowulf.

Which of the 4 versions of the Psalm are you most comfortable with understanding?  If you have been following my blog for less than 5 or 6 years then you might like this classic post:

102 great words that aren’t in English but should be!

I am a writer and traveller with a penchant for history and getting off the beaten track. With several books to my name including a #1 seller, I also write environmental, travel and history articles for magazines as well as freelance work. Recently I've appeared on BBC Radio and Bloomberg TV and am waiting on the filming of a ghost story on British TV. I run my own private UK tours company (Ye Olde England Tours) with small, private and totally customisable guided tours run by myself!
View all posts by Stephen Liddell →
This entry was posted in Culture, Heritage, history, Religion and Faith and tagged Anglo-Saxon, Beowulf, English, English language, Middle English, Old English, Psalm. Bookmark the permalink.

9 Responses to An example of how English has changed over 1200 years.