The underground city beneath Nottingham

Many people know of the city of Nottingham for its folklore of Robin Hood, Little John and the rest of the Merry Men who lived in Sherwood Forest stealing from the rich to give to the poor whilst evading the tyrannical Sheriff.

What you might not know is that the city of Nottingham which sits above ground is mirrored by a secret city underground composed of a network of 549 (known) caves.  These caves are all man-made, as the ground underneath the city is made up of sandstone, which the local population long ago discovered could be easily dug into. 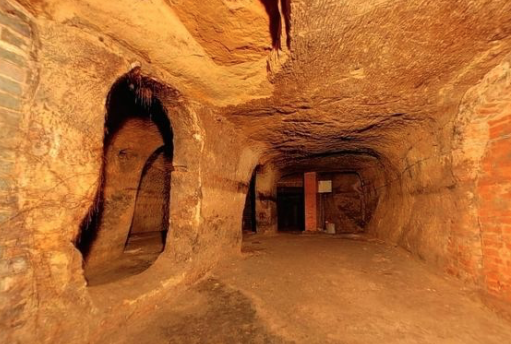 Underneath the city of Nottingham

More caves were created in modern times. Historic England reports, “The Victorians also used the caves as stables, for cold and fireproof storage, or as tourist attractions, follies, and summerhouses. In the 20th-century there were catacombs, garages, and air-raid shelters. There is even an underground skittle alley, with a slot carved in one wall for your ball to return through.”

In the mid-20th century efforts were made to preserve the caves, and they now serve as one of the main tourist attractions for Nottingham. The survey hopes to analyze which of the caves might be made publicly accessible, as well as used as filming locations, art spaces or coffee shops.

The caves proved invaluable to tradesmen like candle makers, bakers and blacksmiths as they could build hot fires without worrying about their workshops setting on fire and without having to damp down or cover their fires each night.

Butchers and fishmongers built their workplaces there so as to take advantage of absence of flies and cool temperature. Even maltsters were able to use the cool temperature of around 53 degrees Fahrenheit to create malt from barley all throughout the year unlike competitors from other regions who were forced to wait till winter to do so.

The cave of Thomas Herbet.

As the town prospered and grew, the old caves would get blocked up at times and then converted for other uses. Some of them became storehouses or vaults where people stored wool which was very popular in local markets. In many of them, some of the formerly elaborate details were hewn away so that the chambers could serve new purposes too.

Some of the caves were later acquired by wealthy owners who started working their whims into the stone. One of the stones were converted by a lace maker by the name of Thomas Herbert who carved summer house back in 1856 with balustrades, windows, arches, pillars and recesses over The Park & Meadows. This was converted into a grotto later on with the help of some petrified stone since its roof had already collapsed.

One of these caves, owned by Thomas Herbert, a lace maker, has been called the Victorian Folly because of the huge carving on its back wall of Daniel with six lions from the bible. The rest of the cave has also been intricately carved with a number of arches, pillars, staircases, buttresses, windows, and even ornamental animals.

In the Second World War, more than 80 of these cases were used as shelters for air raids. There are a number of ancient caves which were opened up and then connected with some newly dug passages and new shelters were also excavated, including a lot of space beneath the cigarette factory of Player’s which could hold as many as 9000 people. Most of the sand which had been excavated at the time of these operations were filled in sandbags and used for the war bunkers both locally as well as abroad. It was only later discovered that there was a cave below the Nottingham castle which had been used secretly for radon and radium extraction at the time of the war too which caused a huge local uproar of complaints!

For a look at some more mysterious and less well known caves that only really came to prominence then take a look at my old post Caynton Caves and the Knights Templars.

I am a writer and traveller with a penchant for history and getting off the beaten track. With several books to my name including a #1 seller, I also write environmental, travel and history articles for magazines as well as freelance work. Recently I've appeared on BBC Radio and Bloomberg TV and am waiting on the filming of a ghost story on British TV. I run my own private UK tours company (Ye Olde England Tours) with small, private and totally customisable guided tours run by myself!
View all posts by Stephen Liddell →
This entry was posted in history and tagged Caves, Nottingham, Robin Hood, WW2. Bookmark the permalink.

12 Responses to The underground city beneath Nottingham