So this last week I have spent much of the later mornings sat on my swinging chair and I’ve made a new friend. 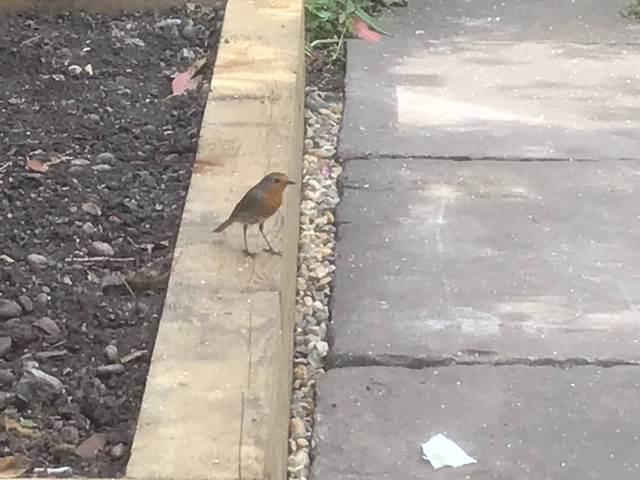 Male Robins are very friendly and inquisitive birds and more than once I have been digging the soil over and left the fork for a few moments and when I’ve looked back, he has been sat on it.  In fact some times I’ve seen 3 of them which is very rare as they are highly territorial.  Perhaps with this new and increasingly nature friendly garden, everyone wants a piece of it.

This little fellow sits on the table when I am sat at it and he sits on the bar of my swing chair so I can see his little feet over my head.  So far he hasn’t used me as a toilet so that’s good.  I’m pretty sure he will come for food out of my hand one day.  A few days before I moved in the winter, one of the Robins who was friendly with me, I caught walking on my hallway carpet!

I don’t know why exactly but there is something about my 200 year old big heavy patio stones that make insects, flies and grubs die.  Maybe they dry out on the journey from one crack to the next or perhaps the heat from the stones get to them.  For all I know, 200 year old paving stones are something like insect heaven.

But whenever I open my back door there are one or two there and Mr Robin keeps an eye on me to see if it is safe to get his food.  One time I even pointed out a dead fly to him which he had missed.  It’s nice to have a bit of purpose in life even if it is just this.

Yesterday I felt quite bad as my neighbour was going to get her children to wash her car so I said I would pay £10 if they were to wash mine.  She actually volunteered them to washing my car for free which is handy as I don’t have £10.

So it being around 4pm and my living in this bizarre 1940’s mirror universe I thought I would have some lemonade and raspberries.  You can’t get much more English or indeed 1940’s than that.  As I was preparing them, I heard a shout from the front and my first thought was that somehow my car had been damaged.

As it happened, their hose could only reach 75% of my car and apparently washing a car fully by hand isn’t a thing children do any more.  I saw my lovely neighbour going out to wash the unreachable parts with a bucket before letting the children finish things off.  I heard various comments about how filthy the car was which was precisely why I wanted it washed.

Anyway, I felt bad having my lemonade and raspberries in the front room and would have felt more bad if anyone had peered in the windows and noticed my carefree ways.  In fairness I had been working since before 7am so I had done my bit.

So I decided to go back and sit in the back a while where I wouldn’t feel so guilty.

I know what you’re thinking….. Stephen has the greenest and most lush lawn ever.

I am a writer and traveller with a penchant for history and getting off the beaten track. With several books to my name including a #1 seller, I also write environmental, travel and history articles for magazines as well as freelance work. Recently I've appeared on BBC Radio and Bloomberg TV and am waiting on the filming of a ghost story on British TV. I run my own private UK tours company (Ye Olde England Tours) with small, private and totally customisable guided tours run by myself!
View all posts by Stephen Liddell →
This entry was posted in Life and tagged Coronavirus, Coronavirus Diary, Diary, garden, Self isolation, Social Distancing. Bookmark the permalink.