My last post on the re-discovery of Eanswythe of Kent ended with a mention of the proud tradition of the county of Kent.   Today Kent is often known as the garden of England with its kind climate and multitude of fruit, beer and wine related industries but for all that, Kent has some steel.

The official motto of Kent is Invicta which is a Latin phrase often used in the latter days of the Roman Empire to keep morale up; illustrating no matter how bad things were, Rome had never been conquered!

At first glance, it might not make much sense for the county that comes closest to continental Europe and as such seemingly the natural invasion route but there is something to it and like other corners of England there is a definite strong local identity here.  Kent for a time saw off the Romans and whereas other parts of England and the U.K. fell under the rule of various groups, Kent became settled by the often forgotten Jutes.

Kent was also targeted by various other empires and nations right up to The Battle of Graveney Marsh – The last battle on British soil.

The Invicta motto for Kent however really goes back to the invasion of England by William the Conqueror in 1066.  Legend has it that, while marching from the 1066 battle site at Hastings, William marched on to London on his way to the (then) capital Winchester.  While passing through Kent, the local people picked up branches and marched at William’s men.

Outnumbered, scared and on enemy territory, William and his army took flight and took a different route to London. As the people of Kent felt that they had chased William away, they adopted “Invicta” as a county motto. 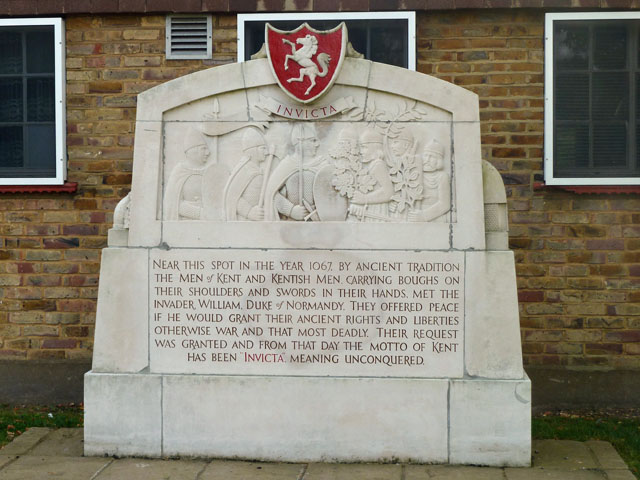 A different version of the legend above is depicted on a monument at Swanscombe in Kent, where legend states this meeting took place on the Old Roman Road to London (Watling Street). The monument was moved in the early 1960s due to the construction of the A2 dual carriageway. It is now located in the church yard of Saint Peter and Saint Paul’s Church in Swanscombe.

Near this spot by ancient tradition the men of Kent and Kentish men carrying boughs on their shoulders and swords in their hands met the invader William Duke of Normandy. They offered peace if he would grant their ancient rights and liberties otherwise war and that most deadly. Their request was granted and from that day the motto of Kent has been INVICTA meaning Unconquered.

Its origin has also been said to have been because Dover was not besieged or defeated on William’s march through Kent, but instead agreed to a conditional surrender to him, on its own terms, and was therefore not conquered by him. Holding of land in Kent by gavelkind, rather than the feudal-Norman laws of primogeniture, lasted until the 20th Century standardisation laws.

The law of primogeniture is a great example of just how destructive and alien the Norman conquest was.  Primogeniture means that land and property are inherited by the oldest son.  The Anglo-Saxons had a much more democratic way of running things (some times even their kings were elected) and this was to equally split the land and property out rather than just to the oldest son.   The very fact this tradition survived just outside London suggests that the people of the county did indeed acquire some concessions from William the Conqueror as did other areas such as Durham and Northumberland in the north and the already rich and powerful City of London (as opposed to London generally).

The county motto and shield of Kent.

I am a writer and traveller with a penchant for history and getting off the beaten track. With several books to my name including a #1 seller, I also write environmental, travel and history articles for magazines as well as freelance work. Recently I've appeared on BBC Radio and Bloomberg TV and am waiting on the filming of a ghost story on British TV. I run my own private UK tours company (Ye Olde England Tours) with small, private and totally customisable guided tours run by myself!
View all posts by Stephen Liddell →
This entry was posted in geography, history and tagged Anglo-Saxon, County of Kent, gavelkind, Jutes, Kent Invicta, Memorials, Normans, Romans, William The Conqueror. Bookmark the permalink.

6 Responses to Kent Invicta! – The undefeated Garden of England.