Revealing the remains of Eanswythe – An ancient Anglo-Saxon princess and Saint.

Exciting news has come out recently, at least exciting if ancient skeletal remains are your thing. An Anglo-Saxon princess who was one of England’s earliest Christian saints has been identified by scientists in a church in Kent.

The remains have been found to Date from the mid-seventh century AD, the princess was the daughter of King Eadbald (literally “the prosperous one”), the ruler of the Anglo-Saxon kingdom of Kent, who was that micro-country’s monarch from 616 (or 618) to 640.

Parts of the Kentish royal dynasty’s lineage are unclear but some interpretations of their genealogy suggests that he was the present Queen’s 40th great grandfather.

His daughter Eanswythe, whose fragmentary skeleton has just been identified, was a devout Christian who was said to have refused to marry the pagan king of northeast England; and instead decided to become a nun. 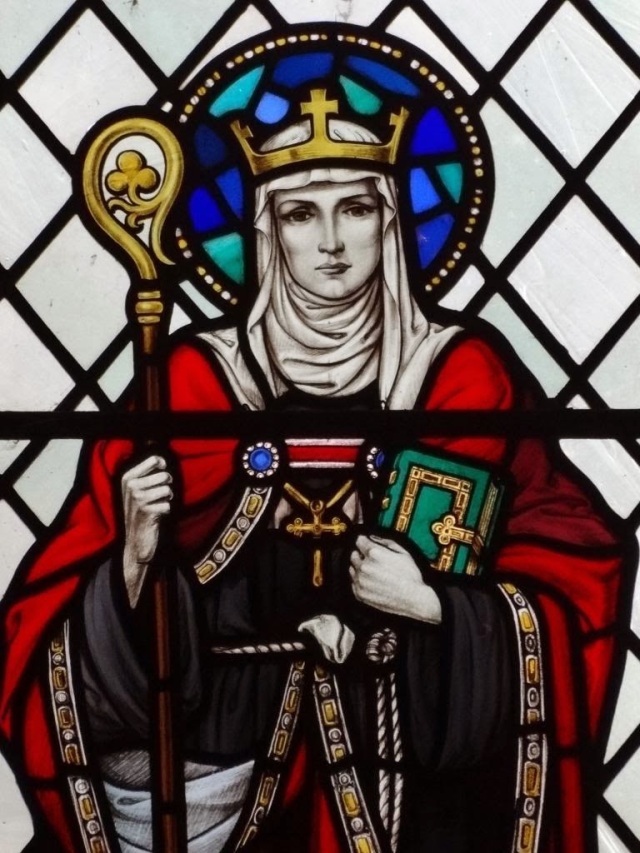 She was only a teenager at the time she founded and became abbess of what may well have been England’s first nunnery.

She was the granddaughter of Bertha, a Christian queen of Kent who, along with St Augustine, was arguably the key individual responsible for helping to initiate pagan Anglo-Saxon England’s conversion to Christianity and it is of course in Kent where one can find the magnificent Canterbury Cathedral.

Rather horrifically, Eanswythe’s life was cut short by a likely outbreak of the Bubonic Place and she died in her late teens or very early 20s.

She was and still is the patron saint of Folkestone and a local history project, aptly called “Finding Eanswythe”, is using the full panoply of modern science to rediscover the long-lost secrets of her life.

A thorough examination of her surviving teeth suggests that she ate relatively refined food. In life, her dentition appears to have been pristine – with virtually no pre-death wear and tear.  Her bones also showed very little sign of injury – apart from a potential stress fracture in one foot bone and two possible damaged finger bones.

Isotopic analysis will also be carried out and may reveal where she grew up and more details about her diet and royal lineage.

As sometimes occurs, if her short life was fascinating enough, even more things happened to her in the the last millennia and a half.

According to mediaeval accounts, she was buried in her own private chapel, overlooking the sea above Folkestone. But as coastal erosion undercut the cliffs, the abbesses who succeeded her increasingly realised that the building would eventually end up crashing into the sea below.  Some time in the eighth century her remains were removed from the stricken chapel and put into a specially built shrine in the nunnery’s main church. By the late 11th century, the nunnery had become a monastery.

However, following the Norman conquest, a castle was built around it – so, in the 12th century, the monks demanded that they be allowed to somewhere more tranquil.

The princess’s bones were therefore disinterred again and moved, in 1138 AD just a few hundred metres away to a brand new church, a later though still ancient version of which still stands today as Folkestone’s Parish Church. Here she became the centre of a local cult and was believed to be able to help cure disease. Her official saint’s day is 12th September.

But, after the mediaeval period had drawn to a close, Eanswythe’s story took a new and unexpected turn with the infamous King Henry VIII.  When the king broke away from the Roman Catholic Church and established the Church of England, the government became increasingly hostile to the veneration of saints.

In 1535, the prior of Folkestone seems to have realised that, unless he took drastic action, government officials would seize and destroy Eanswythe’s bones. So he (or some of his monks) appear to have hurriedly forced the lead box containing them into a secret hole in the church wall and blocked it off.

The prior, or a senior church member, then showed the officials a probably gold or gem-studded reliquary, almost certainly containing just a few parts of the saint’s skull.  The  box, with its diminished contents, was subsequently seized by the officials and was then acquired by a member of Henry VIII’s household, a Folkestone politician and businessman called Anthony Aucher, who no doubt profited substantially by selling any gems which had adorned the reliquary.

Meanwhile, Eanswythe rested safe and secure in her dark hiding place inside the church’s north wall, just beside the altar.  As with several such incidents, her hiding place was gradually forgotten long after restoring them would have been a safe thing to do.

When in 1885, workmen engaged in modernising the church stumbled across human remains there was immediate speculation about the possibility that they could be the bones of St Eanswythe and the discovery was reported in newspapers worldwide.  Baa then however, there was no scientific way of confirming her identity without doubt though it would seem to be a reasonable assumption.

For 132 years, the bones were stashed away in a specially constructed wall niche and once again began to fade from memory, until just three years ago a group of local historians and archaeologists decided to try to solve the mystery.

They did so by asking scientists to examine the bones in order to discover the long-dead individual’s age at death and sex – and by carrying out radiocarbon dating tests to ascertain whether the bones did indeed date from the seventh century.  The results indicate that the fragmentary skeleton was indeed that of St Eanswythe.

Medieval sources had said that she had died very young and the scientific examination of her bones and teeth revealed that the individual had been between 17 and 21 years old when she died which goes to show that sometimes the much derided ancient sources are accurate.

The radiocarbon tests then revealed that she had died in the mid-seventh century – the exact period when Eanswythe‘s life ended.  Examination of her teeth showed virtually no pre-death scratches on her tooth enamel, a fact that suggests that she had consumed on relatively good food.

Apart from the purely historical events, Eanswythe was credited with all manner of stories and miracles during the medieval times and so became highly venerated by the local people of Folkstone.

She was believed to have miraculously made water run uphill (a story probably developed in order to explain an optical illusion which seemed to show a local aqueduct channelling water up a gradient).   Eanswythe was also said to have miraculously lengthened a wooden beam to construct a church by calling on Christ to help when a pagan king and his gods had failed to lengthen it.   And exactly the sort of miracle that I love, she was also credited for resurrecting a dead goose that had been stolen and eaten. I wonder if she can help out with toilet rolls?  Her ghost was said to have cured a man suffering from leprosy or some other skin disease.

In a sense, she symbolises the huge contribution to early English history made by high-status women. Prior to the coming of Christianity, it is not known whether Anglo-Saxon women played any major political roles with the establishment Christianity certainly did it bit for girl-power.  Princesses played a major part in the conversion of England from paganism to the new faith. When Anglo-Saxon and other Christian princesses married pagan Anglo-Saxon kings, their presence often allowed Christianity to gain the upper hand and flourish.

What’s more, those royal daughters who did not marry kings and princes were established by their royal fathers or brothers as abbesses of a new type of institution – nunneries, which in turn, alongside the monasteries, began to wield substantial social and cultural influence. Many of the new abbesses (like Eanswythe) became popular saints and were revered for centuries.

St Eanswythe died some 1,360 years ago but her newly rediscovered life and times are about to captivate a new audience.

“Our identification of St Eanswythe’s skeletal remains open up the possibility of using DNA to investigate the ancestry of the Kentish and Frankish royal dynasties,” said the senior archaeologist involved in the project, Dr Andrew Richardson of the Canterbury Archaeological Trust.

“St Eanswythe was a local heroine of great relevance to local people. In mediaeval times, they saw her as their protector from disease and suffering. Researching her today will bring the people of Folkestone nearer to that history,” said the head of the Finding Eanswythe project, Dr Lesley Hardy, a historian at Canterbury Christ Church University.

Kent has a long and proud history all of its own, maybe a good subject for a post but for now if you enjoyed reading about this ancient English female figure then you might also like Æthelflaed – Lady of the Mercians and a similar themed post on our greatest ever monarch  Have they found the missing bones of King Alfred The Great?

I am a writer and traveller with a penchant for history and getting off the beaten track. With several books to my name including a #1 seller, I also write environmental, travel and history articles for magazines as well as freelance work. Recently I've appeared on BBC Radio and Bloomberg TV and am waiting on the filming of a ghost story on British TV. I run my own private UK tours company (Ye Olde England Tours) with small, private and totally customisable guided tours run by myself!
View all posts by Stephen Liddell →
This entry was posted in history, Life, News and tagged #WPLongform, Anglo-Saxon, Christian, County of Kent, Eanswythe, Long reads, Princess Eanswythe, Saint Eanswythe. Bookmark the permalink.

10 Responses to Revealing the remains of Eanswythe – An ancient Anglo-Saxon princess and Saint.