Coronavirus Diary 4 – From Boris with love.

I’m a bit cold today as I write this. Despite it almost being April, it’s only about 6 degrees C outside (42F) and I am a bit nippy especially as the windows have been ajar since 7am to let some fresh air in and I generally only have the house heated to about 17 degrees or 54F.

It’s a bit colder than usual today as part of the works my new house is undergoing is to have the old fireplace restored and work is paused at its most inconvenient stage allowing cold to flood in.  I kind of like it in the evening though as when there is a gentle breeze a sound comes down the chimney that sounds like a sleeping dragon.

My church currently performing its Sunday service on Facebook! and they just read out my mothers name too as it is her anniversary soon.

One of the things people are meant to be doing during Social Distancing and Self-Isolation is communicating in other ways.  I’m sure it was meant to be emails and videos, WordPress blogs!! etc but the one that piqued my interest today was that of little 7 year old Josephine from a small place called Stubbington in Hampshire.  She wrote to the Prime Minister Boris Johnson understandably a bit sad and distressed as she has twice had to cancel her 7th birthday party and wondering what could be done to stop people from dying and to look after the hospitals.

Mr Johnson sent her back a hand written note, telling her she was “setting a great example.”   It’s quite cute really even if it was mostly done for PR purposes, the principle of being able to directly lobby and meet your politicians is incredibly important in the U.K. and cherished.  Even American politicians I have taken on tours have admitted there isn’t the same direct and easy access where they live.

I’m pretty ok with Boris, a little mad as he might be despite his government currently on a course to bankrupt me. I know it can’t be easy unexpectedly having to try and save millions of lives and many more livelihoods.   A lot of people who didn’t vote for him at the last election or for other big issues often cast him to be authoritarian but whatever else, it seems clear he is trying his best to not to rush in to draconian measures like other places and to offer unprecedented financial support to much of society.   I myself would have actually acted like China did in Wuhan at the first outbreak and immediately stop all flights and travel… but then thats my Taliban tendencies coming to the fore plus if I get the virus I might die.  However there is more to think about than just myself!

The letter seems very Boris, high energy with exclamation marks and a bit of education showing through with a colon!   In the far distant past I wrote about Calligraphy: The Art of writing or why I bought a Fountain Pen , it’s nice to see the Prime Minister is also into writing by hand.  Never mind its the closest thing we’ve seen to the end of the world. at least our leader follows the  When two (spaces) are better than one rule! 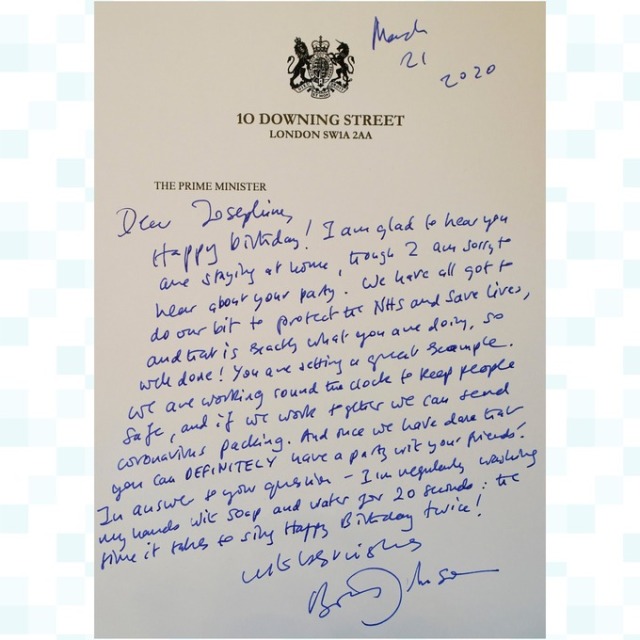 From Boris with love

Keep in touch with comments or letters 🙂

I am a writer and traveller with a penchant for history and getting off the beaten track. With several books to my name including a #1 seller, I also write environmental, travel and history articles for magazines as well as freelance work. Recently I've appeared on BBC Radio and Bloomberg TV and am waiting on the filming of a ghost story on British TV. I run my own private UK tours company (Ye Olde England Tours) with small, private and totally customisable guided tours run by myself!
View all posts by Stephen Liddell →
This entry was posted in Life and tagged All Saints Church, Boris Johnson, Calligraphy, Coronavirus, Coronavirus Diary, CoronavirusUK, Corvid 19, Rules for letter writing, Self isolation, Self Quarantine, Social Distancing. Bookmark the permalink.

6 Responses to Coronavirus Diary 4 – From Boris with love.