Posted on September 16, 2019 by Stephen Liddell

It’s no secret that Downton Abbey is my favourite television show of the 21st Century.  I love everything about it.  The era, the mostly gentle storylines, the costumes, grant houses and beautiful countryside, the witty insults and quotes and the fact that everyone in the programme can actually speak in a civilised fashion which seems to be beyond many actors these days let alone the characters they portray.

I’m sure I’m not the only one who would have been very happy they had continued the 6 year run of Downton Abbey though there were lots of rumours that Dame Maggie Smith was getting increasingly fed up with it and the recognition that made her day to life apparently a little tedious. 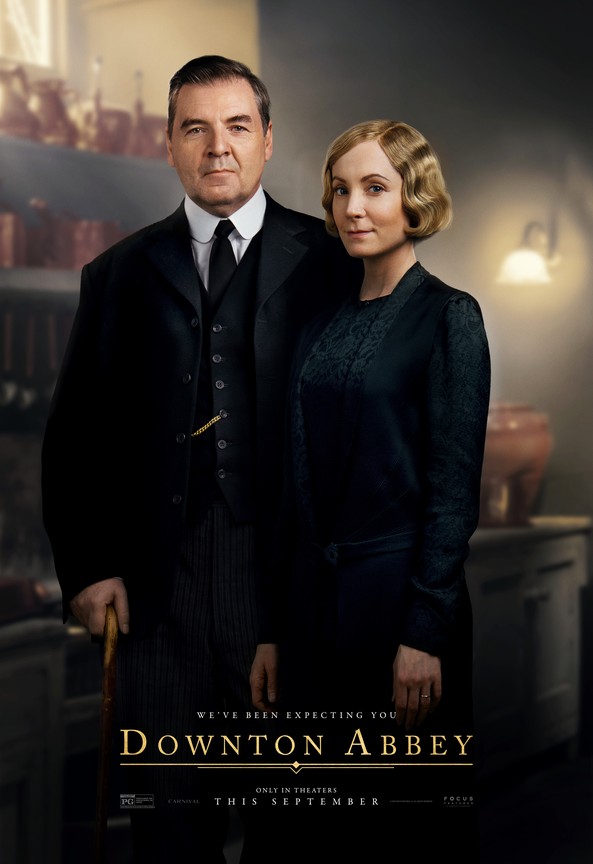 Mr. Bates and Anna (my favourite) in Downton Abbey The Movie

Whenever they bring back television programmes there is always a tendency for it to fall into one of top traps, one that it is entirely pointless or the second that the nature of the production changes so much due to some sort of earnestness that whatever made it popular on television isn’t sufficient enough on the silver screen.

Happily Downton Abbey doesn’t falter with either of these and carries on the television series by exactly the same means as before.  There is no explanation whatsoever as to who everyone is or what is going on but from two people I know who watched the film without seeing the series, it didn’t dampen their enjoyment in any way. 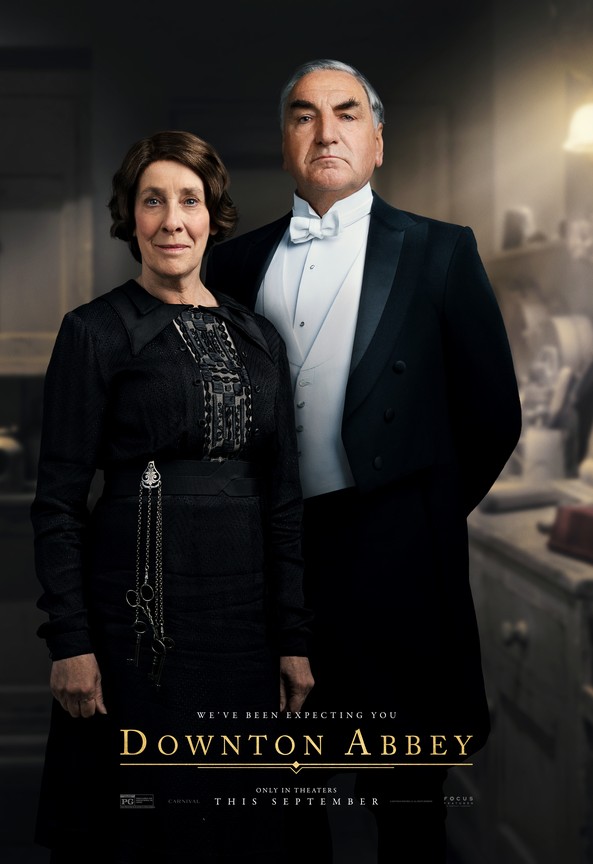 The incomparable Mrs Hughes and the indomitable Mr. Carson (my other favourite lol) in Downton Abbey The Movie

All the main characters are still present with the exception of the odd valet, village doctor, Lady Rose and Aunt Rosamond and everyone gets featured to various degrees.  There are two new major characters joining the family however; namely Tuppence Middleton as the charming lady’s maid Lucy Smith and the Imelda Staunton as the dowager Countess of Grantham’s distant cousin, Lady Bagshaw.  Both of them are tremendous and Tuppence Middleton plays a very different character than that many of us saw in Fishermans Friends

If you remember the Christmas special in 2015, took us up to 1925, with Carson retiring with a palsy, Mr. Barrow taking over and Lady Mary running the estate as well as finally  Daisy and Andy getting a bit comfortable with each other.   We’re now in 1927 and the country is recovering from The General Strike though in true Downton style, there isn’t too much evidence of discord except for Diasy who keeps her socialist yearnings.  The Dowager Countess at one point is asked if she was affected by the strike and she replies with some disdain  that  “My maid was rather curt while it was on.”

The main plot of the film revolves around a  a one-night visit to Downton by King George V  and Queen Mary accompanied by a massive entourage, as part of a tour of Yorkshire and is loosely based on fact. 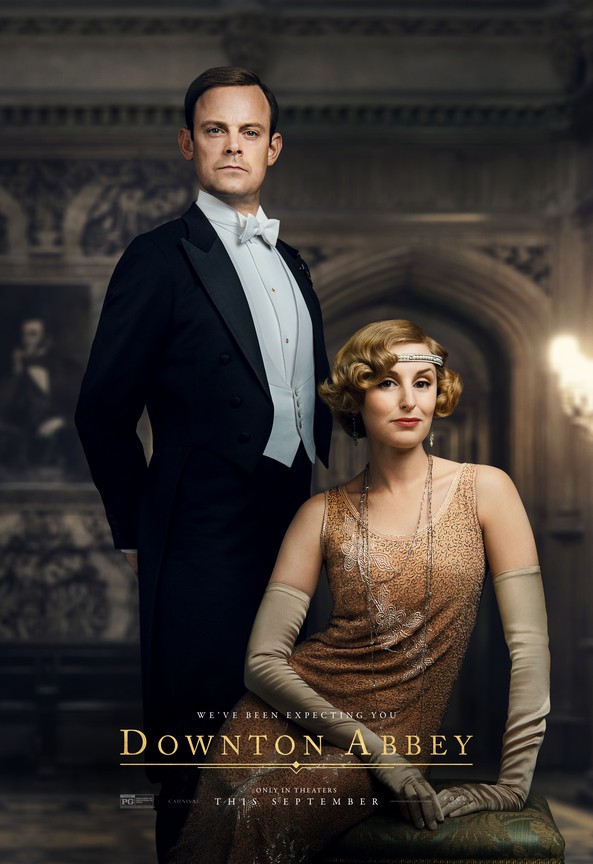 The film opens by reverently following the journey of the royal letter announcing the visit, all the way from Buckingham Palace to Downton, a fiesta of uniforms, steam trains, antique vans and motorbikes. Its arrival sets off a frenzy of excitement in the household, even more downstairs than upstairs, of course with the honourable exception of Daisy.  What greater honour could their be than to not only serve their betters but their King?

Sadly as the great day approaches, the Downton team are horrified to learn that the royal household is bringing its own staff, umpteen liveried footmen, a pompous French chef called M. Courbet, and an incredibly up himself butler, Mr Wilson (David Haig), who insists that his proper title is not butler but “The King’s Page of the Back Stairs”.  As such our faithful team won’t even be permitted to serve in their own household! 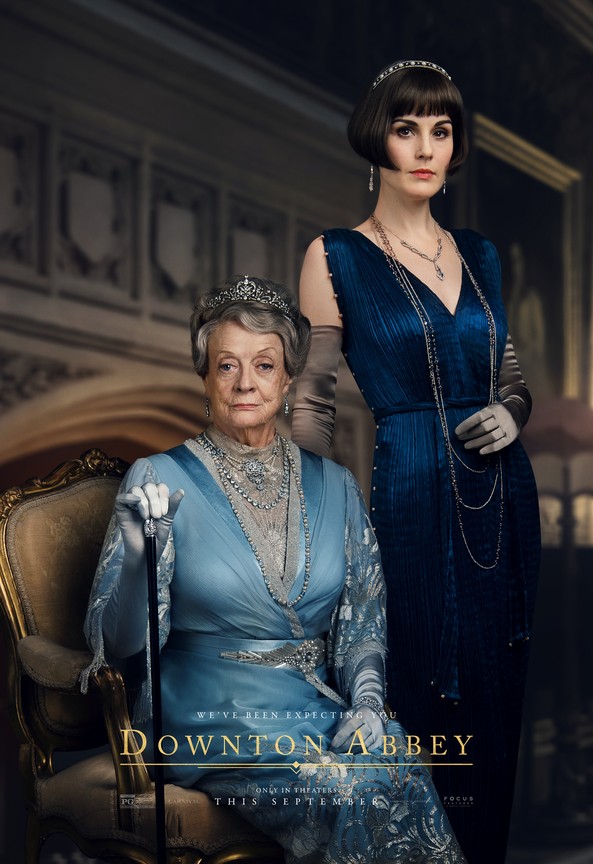 With all this commotion going on it is no surprise that Mr. Barrows finds himself a little out of his depth though it is nice to see his character has become a senior and responsible member of the team.  Therefore Lady Mary  promptly brings Carson out of retirement to meet the challenge. What would Downton be without Mr. Carson? A pudding without a plum that is what!  The relationship between Lady Mary and Mr. Carson was always a touching one I thought and there was never any chance he would turn her down.  I always thought it fun that in many ways Mr. Carson was the most proper person in Downton Abbey, even above the family he so faithfully served.

And so the servants revolt in a most Downton fashion.  “We must all pull our weight tonight for Downton’s glory”, they swear.

There is also a plot about an Irish terrorist attempting to assonate King George V which gives some good screen time for Tom Branson and what passes for a suspenseful action sequence by Downton Abbey standards.

Lord and Lady Grantham…. she isn’t too common for an American!

One of the things that I like about this film is that it isn’t just going through the motions, these characters still have stories to tell and Branson not only gets to have some lovely scenes with a young lady who turns out to be a Princess but also develops a friendship with new maid Lucy Smith that by the end of the film not only paves the way for him to have a grand estate and new wife but for the Dowager Countess to sneakily win her dispute with Lady Bagshaw.

At over 2 hours in length there is plenty of time for secondary stories and Mr. Barrow who temporarily resigns his post due to all the goings on is befriended by a member of the Royal staff and perhaps slightly improbably finds himself to a large underground gay night club in the city of York.  Improbable it may be but it was a good storyline and somewhat shocking to think how people were treated back then.

Barrow, supplanted once more by Carson, gets involved in a bit of gay intrigue, including a visit to a wildly improbable Yorkshire queer nightclub.

In a subplot about trouble with Downton’s boiler, Andy becomes so jealous of Daisy’s banter with a plumber, he attacks the boiler an act in someway treasonous which obviously wins over the reluctant revolutionary Daisy.

We have military parades, more beautiful aerial shots of Downton Abbey as can be good for anyone and a swanky ballroom party as well as some charming character moments.   Does the Royal visit go well?  It does perhaps except for the overly excited Molesley who has the temerity of addressing their Majesties at the dining table.  I guess it was he who is responsible for modern day serving staff asking us if our meals are ok!

Downton Abbey wouldn’t be the same of course with out Violet, Dowager Countess of Grantham who has a number of joyful spats with family members.  My favourite was when they were all discussing whether Violet would maintain a proper manner when Lady Bagshaw arrived and Lord Grantham is assured by Lady Mary I believe who says she will be treated as Aunt that she never knew.   Lord Grantham then asks whether she might be like the mother he never had only for Violet to put an an end to things by stating “Sarcasm is the lowest form of wit!”

There are also moments regarding the inheritance of Downton Abbey, the actual point of the whole series and a touching scene between Lady Mary and the Dowager Countess which promises a certain closure should there be any future instalments.

They’ve been expecting you!

It being Downton Abbey by the end of the film, everyone is happily paired off and despite continuous doubts over pretty much everything, we’re assured life will carry on happily for almost everyone with the hope for a brighter future.

What a charming way to spend an afternoon back at Downton Abbey.  It may not be the most challenging or best film of the year but it is clearly my favourite and I would say the most beautiful film since Goodbye Christopher Robin.  It’s a wonderful way to get away from things for a while and it reminds me of everything I loved about the programme.  I wish people were like that in real life but as it happens it is mostly just me.

I hope you enjoy Downton Abbey as much as I do when it comes out in your country but until then, enjoy the trailer below.  The soaring music and beautiful cinematography just make me want to go and see it again and soon.  Words can’t say just how much I enjoyed this film.

I am a writer and traveller with a penchant for history and getting off the beaten track. With several books to my name including a #1 seller, I also write environmental, travel and history articles for magazines as well as freelance work. Recently I've appeared on BBC Radio and Bloomberg TV and am waiting on the filming of a ghost story on British TV. I run my own private UK tours company (Ye Olde England Tours) with small, private and totally customisable guided tours run by myself!
View all posts by Stephen Liddell →
This entry was posted in Life, Movies and Films, Popular Culture, television and tagged Downton Abbey, Downton Abbey Film, Downton Abbey Film Review, Downton Abbey London Walking Tour, Downton Abbey Tour, Lacock Abbey, movies. Bookmark the permalink.