I was feeling pleased that I had managed to find the first two little known ancient and even neolithic spots with out any maps and so decided to see one more if I could find it.  I had considered  Grim’s Dyke which was both the boundary of Mercia (was one of the kingdoms of the Anglo-Saxon Heptarchy) and that it was possibly a defensive works by the Catuvellauni tribe against the Romans.

However I used to play on Grim’s Dyke as a child even though it was deep into woods usually unvisited by adults and I really wanted to see something new, well new to me.  Perhaps one for another post!

And having seen a holy spring and an ancient burial mound then perhaps that other great mystery of ancient England is that of standing stones.

One of the places I pass through every day on my way into London is Harrow and Wealdstone.  Harrow of course is famous for its ancient church and public school.  Whilst Weald is an old English word for a forested and uncultivated highland area which rather fits in with the woods around Grim’s Dyke doesn’t it?

But what about the stone part?  There had to be a stone here originally, maybe a standing stone like those of Stonehenge, Avebury, Castlerigg or Clava Cairns.  Could there really be a standing stone in the midst of busy old London? 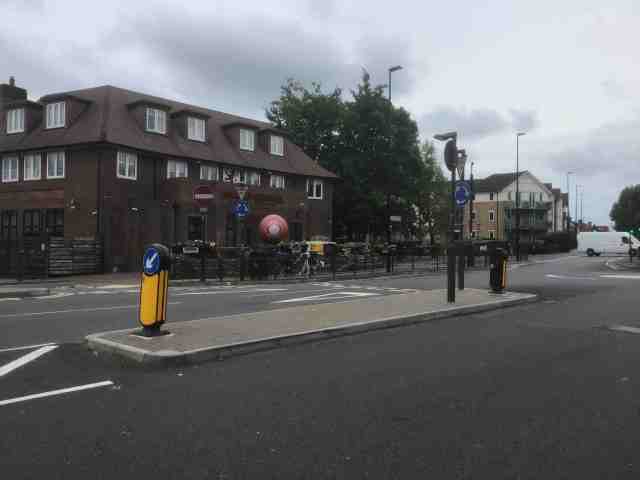 Can you see the standing stone of London?

I set off on the H12 bus to Harrow and Wealdstone bus garage which is near the centre of Wealdstone and so made the most sense of where such a stone might be, if it ever was there in the first place.  I wasn’t to be disappointed, well I was and I wasn’t.  I found the stone and it is a standing stone though obviously not quite like one of the towering 100 tonne stones of the countryside.

English folklore frequently tells the story of wandering Stones, such as the Diamond or Swindon Stone of Avebury which is said visit the River Kennet “for a drink at midnight”, returning by day break to sleep off it’s aerobic jaunt. The Weald Stone went missing for a time too; between a mention in 1549 and its re-appearance in 1834 we can only assume that the Weald Stone was either buried, sank into the ground, or went walk about for some 285 years! 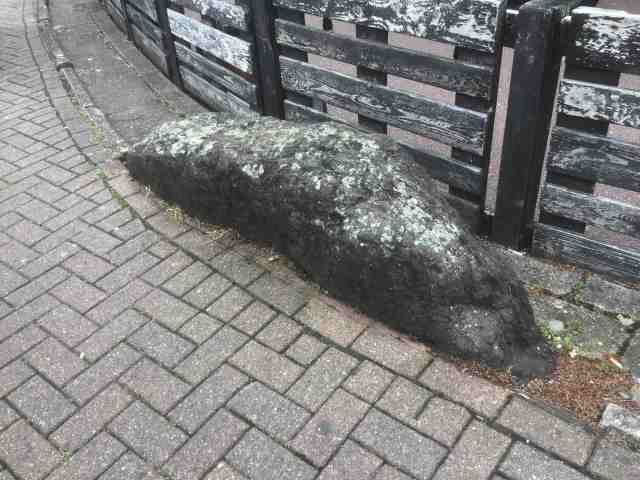 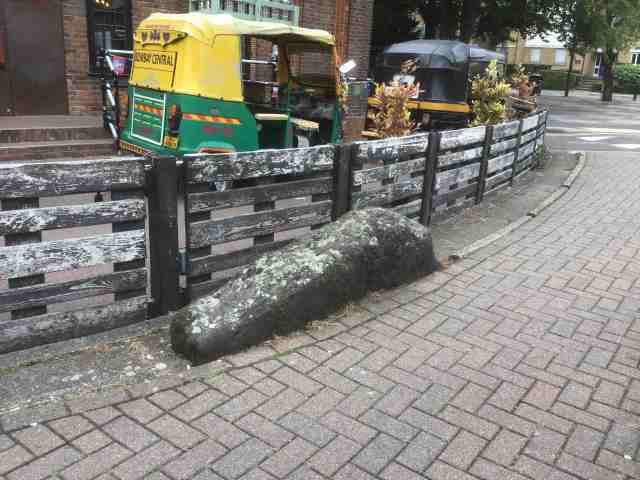 According to an article entitled “Some Thoughts on the Wealdstone” in the Harrow Civic Bulletin (1951), a certain Thomas Toumor “widened the runnel (stream) in his meadow against the Stone before the feast of Pentecost (Wit Sunday)” in 1523. Suggestion is made that the Weald Stone was subsequently either pushed into the runnel as a prank, or that its undermined foundation simply resulted in its collapse.

It seems quite within the realm of possibility that it simply slumped into the mud and silt following Toumour’s digging and with no practical importance, was allowed to slumber until its re-appearance in 1834; when local builders dug it up. Walter Druett states in his book Harrow Through The Ages (1938) that “There is some doubt concerning the purpose of these stones which were brought from a long distance, but they were probably used as direction points and may also have indicated the burying place of some chieftain”. 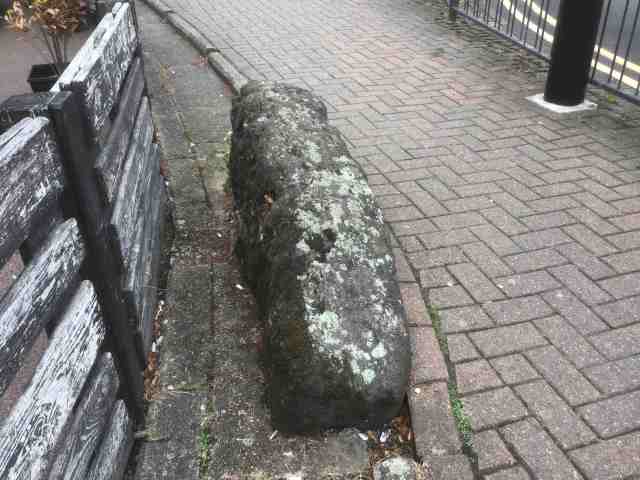 The Weald Stone Inn used to stand here but has recently been replaced by an Indian Restaurant. Prior to it’s re-building in 1935, the Weald Stone was apparently embedded in the corner of the “old house” which was constructed around 1834, if indeed the Weald Stone used was the original. It therefore seems unlikely that the Weald Stone was ever used as either a coal marker or a step up to ones horse and/or carriage. It may have been set upright in the ground or it could be a fragment of a much larger Stone; it would be interesting to find a drawing of the original Red Lion Hotel circa 1834, showing the Stone in situ.   I wouldn’t be surprised if much of the stone is underground or if the stone is now on its side.  Maybe that was a wise thing to do as it would only take a few idiots to destroy a pre-historic monument in the middle of not particularly wealthy district of London.

It must be said that it cannot be proven that the standing Weald Stone has been here since Neolithic times, it is also possible that it has been relocated there in the past few thousand years but it was  a recognised land mark in Tudor times and is mentioned in the books of King Henry VIII.

Well that marks the end of my gallivanting around Watford, Harrow/Middlesex.  I think my mission to prove that there is history just about everywhere in Britain has been a success.  Who’d have thought that you could find prehistoric mounds, holy wells and standing stones all within London?

I hope you enjoyed my little jaunt and if you like to discover more tours in person with me then visit https://yeoldeenglandtours.co.uk/our-tours-2/   There is much more to Britain than London and there is much more to London than the big tourist sights… though I go there too 🙂 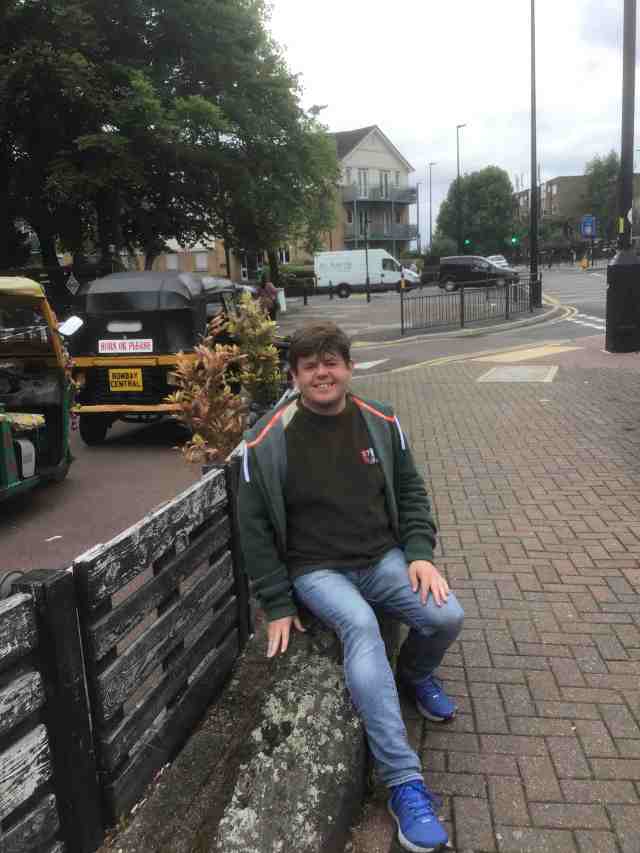 It might not be as dramatic as Stonehenge but you can’t sit on Stonehenge and you also can’t walk 20 seconds to have a curry afterwards either!

I am a writer and traveller with a penchant for history and getting off the beaten track. With several books to my name including several #1 sellers. I also write environmental, travel and history articles for magazines as well as freelance work. I run my private tours company with one tour stated by the leading travel website as being with the #1 authentic London Experience. Recently I've appeared on BBC Radio and Bloomberg TV and am waiting on the filming of a ghost story on British TV. I run my own private UK tours company (Ye Olde England Tours) with small, private and totally customisable guided tours run by myself!
View all posts by Stephen Liddell →
This entry was posted in history, Life, London, Travel, Ye Olde England Tours and tagged Harrow, London, Neolithic, Weald Standing Stone, Wealdstone. Bookmark the permalink.