As roof gardens go, The Garden at 120 is spectacularly high at only 15 storeys but aside from traditional old buildings which happen to have a few pots on the roof (my most memorable being the Windsor Hotel in Cairo), this was my first visit to any purpose built roof-garden.

My visit took place whilst I was giving one of my  Sacred Secret Gardens tours and it was a little bit of a risky proposition to visit a building you had no real idea of where it was whilst with expectant tourists but my sense of direction and hunches didn’t let me down.

The first thing worth looking out for is down at street level. Huddled in the muddled old mixture of streets that date back to Roman times, he building has a spacious through-passageway which retains the ancient link between Fenchurch Street and Fenchurch Avenue. If like me your eyes are always looking upwards rather than trudging gormlessly looking at your phone then you’re in for a treat as there is a fantastic digital art installation by Vong Phaophanit and Claire Oboussier on the ceiling.

You could be under a beautiful ancient oak in Sherwood Forest in mid-summer or perhaps it is winter in London and you’re under a tunnel of giant video screens.

A super-giant and no doubt super HD display screen acts as a camera obscura bringing imagery from the garden down to the street. It mixes a view from the roof’s live-stream looking at places such as Tower Bridge alongside clips of flowing waters, blue skies or under a canopy of green leaves.  It’s well worth going for this alone.

The Garden at 120 sits fifteen storeys up atop One Fen Court, the new HQ for Italian insurance company Generali.  It is now the condition of construction of many modern towers that they have to maximise public access in order to be given permission for them to constructed at all.  There are several much elevated roof gardens in London but they either have to be booked ahead or have a quit hefty entrance fee.

To me the nearby Skygarden though higher up, always comes over as a bit pretentious at least from the imagery I’ve seen as I haven’t been myself.  Then over the Thames you have the awe inspiring Shard which is so high up that London itself looks something like a distant toy as if one is looking at Google Maps but needing to zoom in more to get a better look.

Designed by Eric Parry Architects – who bill it, somewhat grandiosely, as “a building of a hundred views” – One Fen Court will hold the now-standard mix of office and retail space. The Garden at 120, which was landscaped by German firm Latz + Partners, is sandwiched between the Walkie Talkie and The Gherkin, both only a couple of streets away, giving you pretty impressive close-ups. The Shard stands imposingly across the river, the Tower of London is within the sightlines, and Canary Wharf is easily visible in the distance.

Whilst there are treats to be seen across town, there’s plenty to see on the rooftop itself. Amongst the neatly trimmed hedges, wildflower patches, and tranquil water feature, there’s a kind of serenity here that’s too often lacking in the City. The elegant metal pavilion, meanwhile, will only get better-looking, as early summer should bring the wisteria into bloom. Plus, at nearly 3000 square feet, there’s no shortage of space on a sunny day and it is anticipated over 200 people will be able to enjoy their stay there at any one time.

At the moment the garden aspect of it looks a little bare which is to be expected on a cold late winters day high up above London in a new garden but the publicity images give an indication of how it may look in a few months time.

Artists impression of how the garden at 120 will look in the summer.

When I first arrived, there was barely anyone there and I don’t think there was ever more than 5-6 people around.  The first thing I noticed was just how quiet it was and how open.  As with any city outside a park, you’re always hemmed in and somewhat oppressed by buildings and perhaps nowhere more so than the old City of London which uniquely combines skyscrapers with alleyways just wide enough for a horse and cart. 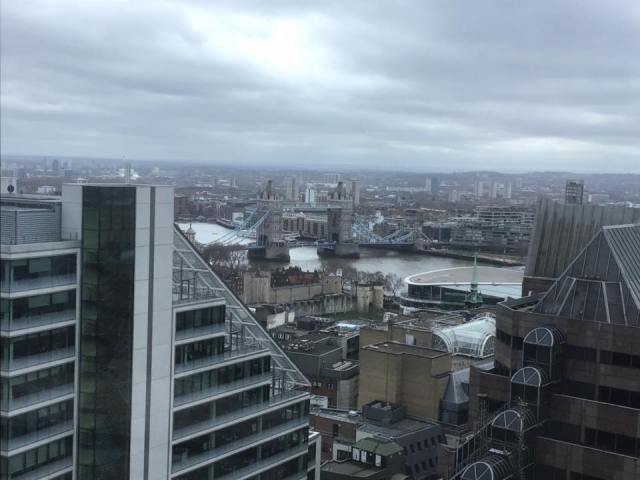 Tower Bridge from a new point of view.  A small section of the Tower of London is to the left.

Up on the roof however everything is so open and you get to appreciate the expanse of it all and I enjoyed being able to pick out the streets and sights that I know so well as well as enjoying new vantage points of places such as the Tower of London or Leadenhall Market.

Looking to Westminster… The Deathstar on the left, Parliament on the horizon to its right.  The Tate modern gallery.  The weird looking building just to the left of the Thames is said by some to be the Kim Kardashian.  St Pauls Cathedral is to the right and at the base of the building is the roof of Leadenhall Market and besides that, the stainless steel Lloyds of London building.

You don’t have a great view of the north unless Skyscrapers are your thing in which case you’re in for a real treat but looking west you can see all the way past the Houses of Parliament in the City of Westminster and then to the south you can see the 10 miles or so to Crystal Palace.

Similarly over to the East by Southeast to Canary Wharf and the Isle of Dogs where the cluster of towers stood high on the horizon.

The Garden at 120 looking out towards Canary Wharf

My favourite view however was looking east over Whitechapel. The garden is almost on the eastern boundary of the City of London and it gives the most incredible view over Aldgate, Whitechapel and Spitalfields.

Looking down Whitechapel High Street.  The final photo below is taken besides the dark brick church (centre left).  One of Jack The Rippers victims was murdered between the black skyscraper on the left and the brick building to its right.

As it happened, two days later I was giving a Jack The Ripper walking tour and before it began I managed grab a photograph from the street level looking west towards the roof garden.  You can see the top of the building is clad in materials that give it a particularly funky colour depending on the angle of the sun, keeping in line with the idea that all new buildings should be unique and interesting on the eye rather than a boring rectangle as in so many other cities.

From Aldgate you can see the green fluorescent roof garden in the distance in front of the DeathStar.  I like The Scalpel on the right.

I often wonder what Jack and his unfortunate victims would think of the changes over the last century or so. I’m sure they would be astounded and though the incredible disparity in wealth between the City and the East End is there, the relentless march of money and construction continues to push ever eastwards with many more new towers about to be built than have even been created in the last few years.

This garden may not be sacred but it is closer to heaven than most and it is still secret and so will make a great addition to my Sacred Secret Gardens walk in the old City of London.

Your happy blogger that hates flying but as absolutely no fear of heights.

I am a writer and traveller with a penchant for history and getting off the beaten track. With several books to my name including a #1 seller, I also write environmental, travel and history articles for magazines as well as freelance work. Recently I've appeared on BBC Radio and Bloomberg TV and am waiting on the filming of a ghost story on British TV. I run my own private UK tours company (Ye Olde England Tours) with small, private and totally customisable guided tours run by myself!
View all posts by Stephen Liddell →
This entry was posted in Architecture, Cool Britannia, Life, London, Ye Olde England Tours and tagged City of London, garden, Garden at 120, London, Photography, Skyscapers, Tours, Travel. Bookmark the permalink.