It says something about how much development is occurring in London and also for the longevity of my blog that my 2014 post entitled Looking Up At London is now thoroughly out of date.  I’ve written other blogs about the massive reconstruction, just one of the top of my head was the post on Battersea which I wrote in July entitled Rebuilding Battersea From The Ground Up.

There is more construction in London than not just the whole of Britain put together but all of Europe too, both above and below ground and the last few months I’ve enjoyed seeing the topping out of my favourite skyscraper of 2018, The Scalpel.

The Scalpel nearing completion in June 2018

I found this one quite fascinating to see go up due to the platforms midway up the building from which cranes are put in place.   I’m guessing because of the angular nature of the building, it would be impractical to have a regular super-size crane reaching up from the surface.

The Scalpel nearing completion in June 2018

The distinctive angles as well as looking unique, aim to allow much more light down to the street below compared to regular square or rectangular buildings.

The heights and shapes of the buildings are also due to the ancient streets below, airports  and certain viewing angles of historic buildings which are inshrined in law as being the right of every London to see without interruption. 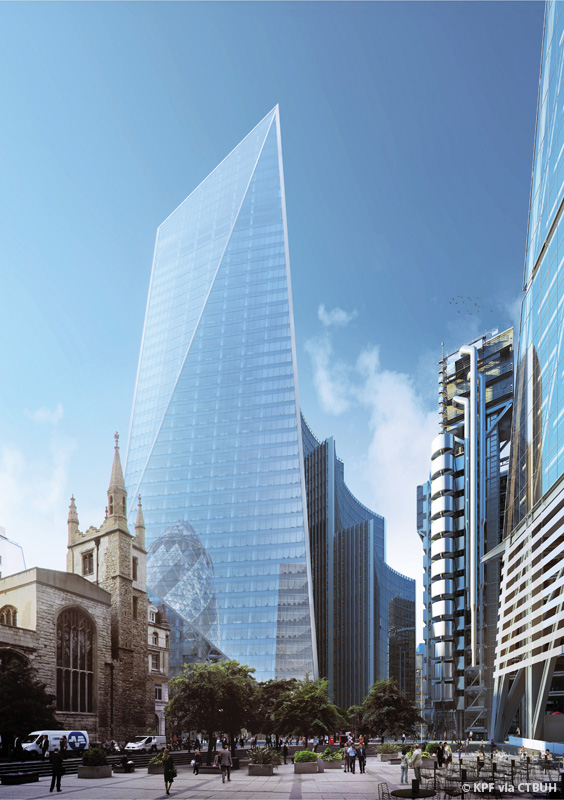 The completed Scalpel, fittingly just a 3 minutes walk from where Jack The Ripper used his sharp knife.

One of the unique aspects of London is how it merges the ancient with the space-age.  Whereas Rome is all old and Dubai is all new, it is quite easy to find buildings centuries or even millennia apart, in the same photo.

All the new buildings in Britain and London in particular have to look distinctive to avoid it being all rectangular boxes like so many other cities and they all have very official and grand sounding names though to Londoners they have more friendly names such as The Gherkin, Cheesegrater, Deathstar, Shard or another new building from this year, the Kim Kardashian on account of its particular shape which looks great for a building but somewhat peculiar for a human being.  450 towers were given permission to be built in 2016 and 500 in 2017 alone.

To add to the number, a new building was announced last week, to be known as The Tulip. At 1,0000ft or 305m will become the tallest building in the City of London though not London itself.

Designed by architects Foster + Partners and proposed for a site next to 30 St Mary Axe or The Gherkin as many know it,  the structure would be just four metres shorter than The Shard on the south side of London Bridge, officially the highest building in the UK.

How the Tulip will squeeze into the City.

Unveiling the plans, the firm said the building is aimed at being a tourist and educational attraction, as well as office space with a key feature being the learning facility at the top of the tower.  This will allow 20,000 free places per year for London’s  school children to see London from above and “bring to life the city’s history and dynamism”. There are also plans internally for glass slides and gondola pod rides.

Looking across the Thames to The Shard.

The developers involved in the planning proposal said construction would begin in 2020 and could be finished by 2025, if permission is granted by the City of London Corporation.

A publicly accessible rooftop garden is also proposed at a revamped Gherkin site and the architects have promised a “minimal“ building footprint will be made possible by high-performance glass and integrated photovoltaic cells. Foster + Partners said the building’s eventual weight would be “equivalent to 80 fully loaded Airbus A380s on a footprint that is half the size of a single plane”.

“The Tulip is in the spirit of London as a progressive, forward-thinking city,” said Norman Foster, founder of Foster + Partners.

The Square Mile as it is today.

TheTulip will feature glass-floored internal bridges and visitors will be able to ride in glass pods rotating slowly on tracks on the exterior. It is expected to attract one million visitors a year.

Although The Tulip’s summit will be a few feet lower than the peak of the Shard, the tallest building in the capital, the designs suggest its viewing platform will be higher than the 800 ft View from the Shard. Visitors will reach the top in double-decker lifts. 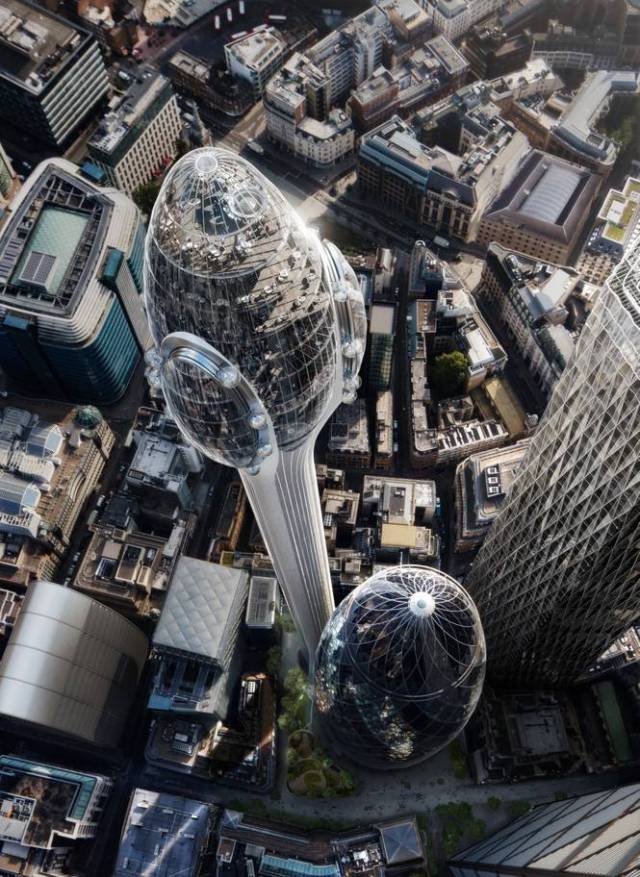 The City of London to the bottom and right, Aldgate to the top and Whitechapel to the left.

The Tulip will be only one foot taller than architect Eric Parry’s proposed  1 Undershaft nearby. That building was at the absolute height limit for Square Mile towers because of City Airport flight paths, but a thick new layer of tarmac on the runway means The Tulip can pip it. A dozen meetings have been held with City planners with discussions to date described as “fruitful and exciting”.

As many skyscrapers as are being built in the old Roman city, there are even more in districts such as the Docklands and much further out towards the suburbs.

One thing is for certain, if following construction The Tulip is the only name given to this building then I shall eat my hat!

What do you think of the mix between the ancient and modern.  Do you have a favourite London building?  If so, let me know!

I am a writer and traveller with a penchant for history and getting off the beaten track. With several books to my name including a #1 seller, I also write environmental, travel and history articles for magazines as well as freelance work. Recently I've appeared on BBC Radio and Bloomberg TV and am waiting on the filming of a ghost story on British TV. I run my own private UK tours company (Ye Olde England Tours) with small, private and totally customisable guided tours run by myself!
View all posts by Stephen Liddell →
This entry was posted in Architecture, Cool Britannia, Life, London, News and tagged Architecture, Construction, London, Skyscapers, The Scalpel, The Tulip, Towers. Bookmark the permalink.