As half the planet is in the midst of not doing very much of anything but eat and watch films, here is my lowdown of my favourite 12 films of 2017 or one per month for those who want to know why I didn’t go with the traditional top 10.

Notable mentions to the very intense Silence which I really enjoyed but was very intense, no doubt as it was meant to be.  And to Wonder Woman which I saw as I know one of the Amazonians and which surprised me for its historical elements though didn’t fool me with the pretence that the scense in the Ottoman Empire weren’t actually just outside London.

I read in the news that the number of people paying to go to the cinema in the USA is plummeting and that just about all the American top 10 films are sequels or remakes.  I’m not an over paid studio executive but you’d think that the previous sentence explains and answers the problem.

At least living in the UK, whilst many of the cinema chains are owned by American studios and they understandably skewer their offerings to the latest comic book rubbish, it is relatively easy to find Indie or smaller budget films if you look for them.

It doesn’t matter though as it was as funny as duck and I am still laughing at some of the lines 6 months later.   I have dropped heavy hints to get this on Blu-Ray as my birthday present (28th December since you asked).

4. Limehouse Golem – This very atmospheric Jack The Ripper esque film set amongst the dank, foggy streets of the East End of London combined with the spectacular bright lights of the old music halls was a great film and with a good twist.  It makes me appreciate my recent walk through nearby Rotherhithe even more now as the areas were no doubt similarly grim.

Watch Out – The Limehouse Golem Is About

5. Death of Stalin – If my favourite genre was comedy then this Comedy of Terror but be number 1 for the year.  Loosely based on the events surrounding the death of legendary Stalin, a farcial English comedy with a smattering of American stars using humour to illustrate the terror and treachery amongst the leading heirs to the Soviet throne.  It certainly makes you wonder if it isn’t quite close to the truth in a number of countries today.  Go see it and if you don’t like it you can kiss my Russian ass!

6. Blade Runner 2049 – I like sci-fi and I like intelligent cinema.  This is the most challenging sci-fi film I have seen since last years Arrival which I uniquely seemed to have guessed the entire plot within the oipening seconds of the film but still thought was about the best film of last year.   I really enjoyed Blade Runner 2049 and its meticlously slow pacing and lack of fast cuts which allowed the cinematography to really take hold and immerse oneself in this grim futuristic portrayal of planet Earth.  Only a slightly disappointing sound track couldn’t quite live up to its illustrious forebear.

I normally go and watch films at about 9.30am on a Monday or Tuesday morning and sit at what I call the bar seats where I can stretch my legs out in the gap between my level and the very ftont seats.  I go at this time so i don’t have to put up with people who can’t follow the Mark Kermode & Simon Mayo Wittertainment cinema ettiquete. 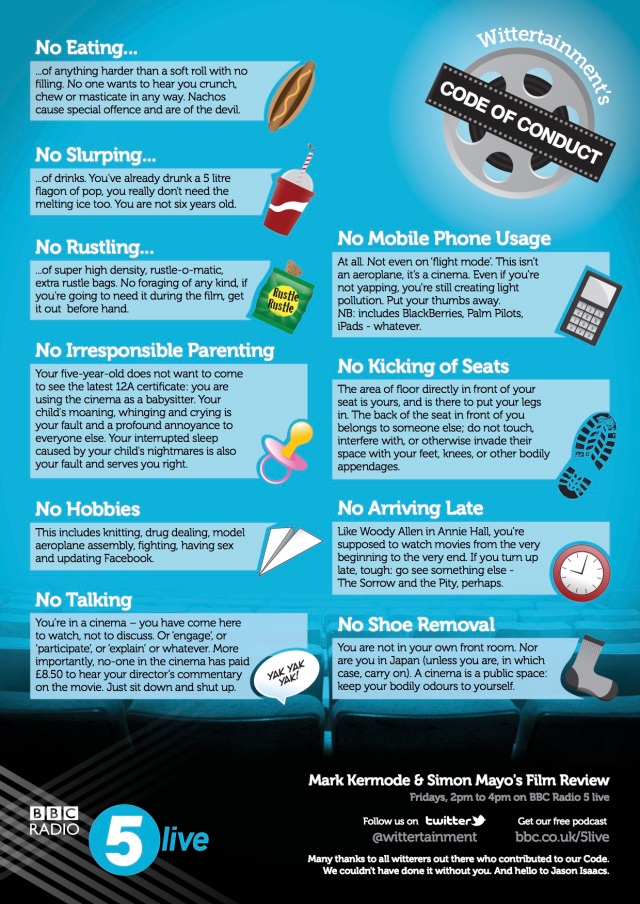 For this film, I thought I might try acting like an adult and went to see it on a Friday afternoon at 2pm and sat right at the back.   It was a big mistake, the film was ruined by two people who went in and out of the cinema 7 times, talked and ate through it and one of them kept getting out their phone.   it wouldn’t matter quite so much if it was The Hitmans Bodyguard but if any film demanded full attention and respect it is Bladerunner, would any casual fan even bother watching it?

It was doubly annoying as there were only 8 people in the large auditorium and rather than sit in a corner, they decided to sit right at the back about 4 seats from me.   Much of the rest of the audience were a little elderly but I knew they were as annoyed as I was and so about 2 hours into the film I politely went over to ask them for the second time to switch off their phone or else I would go to the cinema manager.  For that, ten seconds after returning to my seat I got threatened with having my head ffing knocked off.

I didn’t care, the phone was switched off, the comings and goings ceased too and for the last half hour or so, I could actually enjoy the film albeit with the threat of getting my head knocked off.

The film ended, the lights went on and the pair ran out.  If it hadn’t of been so dark in the cinema I would have seen that it was the equivalent of being threatened by a weedy cockroach but anyone can seem theatening in the dark.  Still two members of the audience thanked me for my efforts.

7. Dunkirk – This rather falls into the same catergory as Blade Runner and Silence.  I like my war films and this one tells the epic story of the the British retreat from the beaches of Dunkirk in WW2 which as bizarre as it sounds led to the eventual victory over Nazi Germany.

Even Hollywood couldn’t attempt to shoehorn a false American presence into these events and so there hasn’t been a recent film on the actions.  Hollywood star director, Christopher Nolan from London used his star power to get big money backing for this film.  It is as epic as the actual events though perhaps slightly distant and unfocused.

8. Atomic Blonde –  This film stars Charlize Theron as a British Agent ( I won’t say more) mired in the murky world of espionage in East Berlin during the height of the cold war.  It is very stylish and adheres to the pop culture and feeling of the time and it is almost one long action sequence.  That said it is perhaps a little overly complicated or should that be contrived.  Anyway, I enjoyed it and it reminded somewhat of my pulp action novel V1 – Vixen

9. Wind River – This is a chilling thriller that follows a rookie FBI agent (Elizabeth Olsen) who teams up with a local game tracker with deep community ties and a haunted past (Jeremy Renner) to investigate the murder of a local girl on a remote Native American Reservation in the hopes of solving her mysterious death.

I really like outdoor films and anything to do with the wilds, maybe as I like those places for real.  This was a very clever and atmospheric film with the added element of it taking place in a Native American area where the residents aren’t too into FBI types.

A bit ahead of the snowy mountain themed The Mountain Between Us due to the originality of the plot and setting though I liked ‘Mountain’ too and also the seemingly universally pummelled The Snowman.

10. Baby Driver –  This was an apprently surprising summer hit but for me it was pretty much the one I wanted to watch.

Baby is a young and partially hearing impaired getaway driver who can make any wild move while in motion with the right track playing. It’s a critical talent he needs to survive his indentured servitude to the crime boss, Doc, who values his role in his meticulously planned robberies. However, just when Baby thinks he is finally free and clear to have his own life with his new girlfriend, Deborah, Doc coerces him back for another job. Now saddled with a crew of thugs too violently unstable to keep to Doc’s plans, Baby finds himself and everything he cares for in terrible danger. To survive and escape the coming maelstrom, it will take all of Baby’s skill, wits and daring, but even on the best track, can he make it when life is forcing him to face the music?

Starring the young Ansel Elgort who I first saw in the wonderful The Fault In Our Stars and one of my favourite and now sadly scandal hit actor Kevin Spacy as the criminal overlord, this film lived up to my expecations.  Lots of high-octane car chases and action and with possibly the best sound-track to a film I have heard in a decade or two.

I never cared for the Fast and Furious films, all 726 of them.  Baby Driver is just fun and cool.

11.  Paddington 2 – I was a big fan of the original Paddington film and of course the now rather ancient British childrens television show of the same name.  This was such a funny film but never strayed into anything violent or with bad language.  Paddington is such a kind-hearted soul, if something of a well-meaning misfit, mind you it must be tough being an orphaned bear from deepest, darkest Peru transported into modern day London.  Downton Abbey fans might like seeing ‘Lord Grantham’ in a different role but I must say the real human star of the film was Hugh Grant.  He was utterly fantastic… a great Christmas film to see too.

It must be said that with the temperature outside the cinema at freezing and it being Monday morning, the heating had broken on Sunday night.  I initially thought it was the usual thing of the air-con being on too strong but the 6 or 7 people I watched the film with gradually ebbed away but with my Viking heritage, I stuck it out, enjoyed my diet coke and 3 scoops of ice-cream and did my best not to die of hyperthermia before the conclusion.

So if the film was still that enjoyable under those circumstances then it must be quite entertaining.

As it turned out, it was only about 3 degrees (36F) inside and the manager gave me free tickets for future movies which was very nice of him

12. Star Wars – The Last Jedi.   I had a bit of a hard time over where to include this film on the list and whether I should even include it at all.  On the one hand it is quite entertaining and I enjoyed it but on the other hand I felt it was a bit of a dragging, vacuous waste of an opportunity.    If it were anything other than Star Wars then it wouldn’t be here. 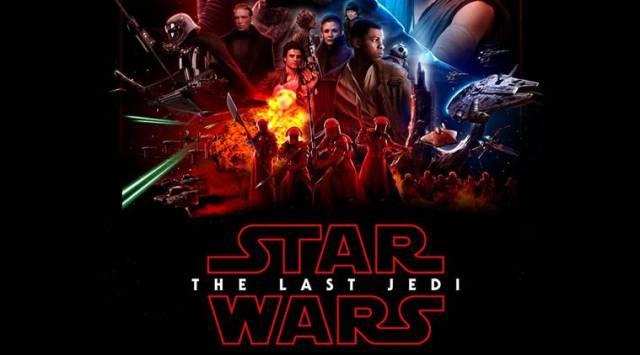 What were your favourite films of 2017?

I am a writer and traveller with a penchant for history and getting off the beaten track. With several books to my name including several #1 sellers. I also write environmental, travel and history articles for magazines as well as freelance work. I run my private tours company with one tour stated by the leading travel website as being with the #1 authentic London Experience. Recently I've appeared on BBC Radio and Bloomberg TV and am waiting on the filming of a ghost story on British TV. I run my own private UK tours company (Ye Olde England Tours) with small, private and totally customisable guided tours run by myself!
View all posts by Stephen Liddell →
This entry was posted in Culture, Life, Movies and Films, Popular Culture and tagged Film Review, Films, Goodbye Christopher Robin, Lion, Movie Review, movies, Star Wars, Top 10 Films 2017, Top 10 Movies 2017. Bookmark the permalink.