The Death of Stalin – Movie Review

Dear Comrades, it gives me great pleasure, indeed it is behoven on me to introduce to you one of the great cinematic treasures of 2017, The Death of Stalin.

As the Presdium is no doubt aware (for they have eyes and ears everywhere) I’ve been waiting to see this film for months.  It is black comedy which mines one of the blackest subjects of the 20th century, the glorious Leadership of Stalin and his cronies, I mean the Assembly… of course I do.  I apologise comrades.

The Death of Stalin could almost be an ol fashioned British farce comedy except that it has two prominent Americans amongst its fantastic and rather large cast.  Plus of course, this film isn’t about those capitalist, imperialist British but rather that of our beloved Soviet Mother Russia.

The film is loosely based on the events around the death of Stalin; how famously he suffered from a catastrohpic and fatal collapse and lay immobilised on the floor just a few feet away from an entire government and army that was too scared to open the door to check that he was ok.  What’s worse all the best doctors had been done away with a year earlier as Stalin feared a Jewish plot to unseat him rather than listen to the learned opinions of his medical staff.  That’s ok, he did much the same with the Soviet Army in WW2 and that all turned out ok apart from a few million deaths here or there.

The Presidium assemble and provaricate over what to do with the nearly but dangerously not quite dead Stalin.

Once found, there is a great delay in arranging medical help, partly assumed because all the party leadership were secretly happy for him to die mixed up with quite a real concern that if he recovered then questions, very deadly questions would be asked as to why there had been such a delay.  Please note, there would be no good answer to such a question.

The large part of the film centres around the jostling for position of a number of incompetent though very communist members of the Presidium trying their best to become the next Soviet leader whilst not getting themselves killed by their erstwhile rivals and the secret police.  All the while plans are underway for the most spectacular funeral that Moscow has ever seen.

It quickly becomes apparent that there are murderous and evil communists and there is Laventry Beria who ran the Ministry of Internal Affairs, the secret police and who oversaw the murders and rapes of countless individuals.  Beria is played absolutely superbly by Simon Russell Beale who just gives the most impressive of performances here.  This no mean feat when other actors include Steve Buscemi as plotting and merciless Nikita Khrushchev, Jeffrey Tambor as the bumbling and ineffectual Deputy Leader Georgy Malenkov, Michael Palin as Vyacheslav Molotov (he of the cocktail fame), Paul Whitehouse as Anastas Mikoyan amonst many others.

A highlight of the film is the appearance in the second half of the film of legendary Soviet  miltary icon Marshall Georgy Zhukov who in this film has a Yorkshire accent as broad as the Dnieper.  Again the film in its own farcial way follows the events of the funeral the surprisingly dramatic conclusion which I won’t spoil here. 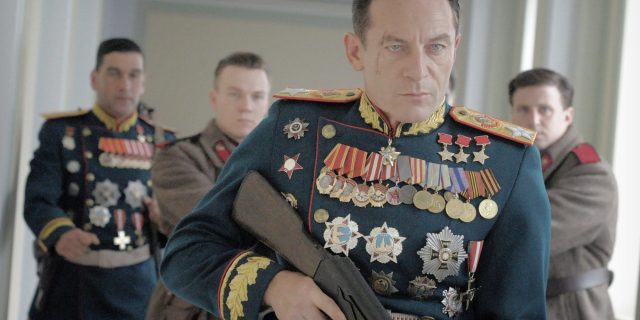 This film made me laugh out loud consistently throughout as it did with others in the audience, no mean feat at a 9.30am showing.  Though it is a fantastic comedy, somehow it also gives an insight into the horrors of living in such a regime.  Even the top figures who have the power of life and death over millions are only ever one wrong word away from exocution themselves.

It’s worth noting also that as farcical as some of the events seem to be, that in some cases the choice was made to tone things down from reality for fear the audience would think it was too unbelievable.  It does make me think if this is what life is like this now in the governments of North Korea, China or Russia as well as obvious questions about the goings on in the Whitehouse.

So that is comrades, I urge you all to do your patriotic duty and go and see this film .  And be sure to applaud loudy at the conclusion.  Should you see it for a second time, i have it from a quite senior source at the Kremlin that you might just get to see your missing wife/husband too.

Please note that all those who fail to press the Like button on this post as well as leaving appriately grovelly tributes to Stalin will be woken at 4am in the morning and sent to a gulag in Siberia and so you should be.

The author refused to confirm or deny that he might get a toilet that actually flushes as a symbol of thanks from the glorious Presidium for writing this review and squeezing in an extra post this week.

I am a writer and traveller with a penchant for history and getting off the beaten track. With several books to my name including a #1 seller, I also write environmental, travel and history articles for magazines as well as freelance work. Recently I've appeared on BBC Radio and Bloomberg TV and am waiting on the filming of a ghost story on British TV. I run my own private UK tours company (Ye Olde England Tours) with small, private and totally customisable guided tours run by myself!
View all posts by Stephen Liddell →
This entry was posted in Funny & Humour, history, Life, Movies and Films and tagged Comedy, Films, Jason Isaacs, Movie Review, movies, Russia, Simon Russell Beale, Stalin, The Death Of Stalin. Bookmark the permalink.

5 Responses to The Death of Stalin – Movie Review