A Cute Salute At Windsor Castle

Posted on January 7, 2017 by Stephen Liddell

It’s not often if ever I post anything considered vaguely cute on my blog but having seen this yesterday, I thought it was too good not to share.

The footage of four-year-old Marshall Scott who visited Windsor Castle on Wednesday to celebrate his 4th birthday has gone viral after someone filmed his adorable salute standing next to a guardsman.

Little Marshall Scott was himself dressed as a miniature guardsman when one of the Coldstream Guards posed for a photo with him.

Marshall’s mum Imogen Scott, from Slough, explained: ‘He is very patriotic and says the Queen is “lovely and beautiful”.   On her own Facebook page she wrote

‘Can’t believe how good Marshall’s birthday has been.

‘Want to say thank you to all the people that stopped to have photos with him & wished him a happy birthday, to the family that bought him a soldier teddy, to the group of girls that got everyone to sing happy birthday to him & to the soldier who, after his march, stopped all the other soldiers to come back to Marshall to have photos with him (didn’t get a picture as my phone reset itself) Apparently it has been ‘THE BEST BIRTHDAY EVER’

Marshall has now received an official invite for a very special tour around Windsor Castle from the soldier in the Coldstream Guards who came out to greet the little boy.

You can see little Marshall having the time of his life in the video below.

The official Facebook page of the Coldstream Guards comments on the video by statting ‘By coincidence it was this young lads 4th Birthday when he came and visited us at Windsor Castle. We have a spot reserved for him at the Army Foundation College Harrogate for the March 2029 intake. #FutureGuardsman #ColdstreamGuards.’

It should be remembered that whilst in some nations the guards who are on display are merely ceremonial for the sake of the tourists, in Britain all of the soldiers on public duty are actually real soldiers who fight in places such as Afghanistan and when they are on duty at Windsor, Buckingham Palace or several other places then it just happens to be where they are posted.

They are there 24 hours a day to guard The Queen and others whether tourists are watching or not.   In fact only yesterday it was reported that The Queen was almost shot by one of her own guardsmen whilst out for a stroll in the early hours. 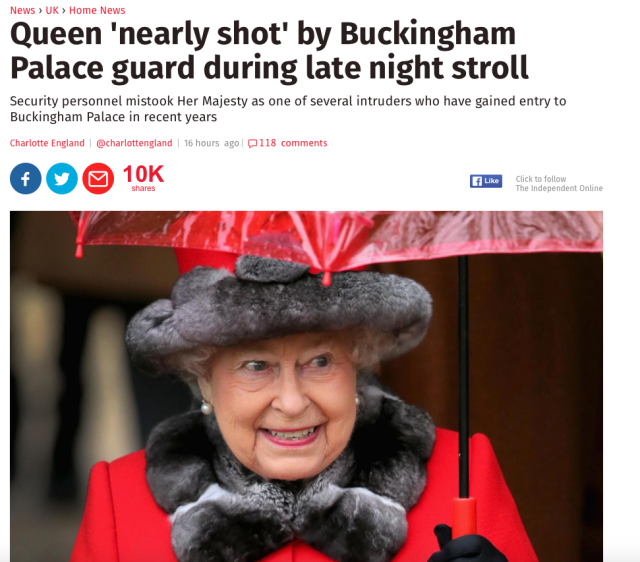 From time to time her majesty is said to struggle to sleep. During a spell of insomnia, the 90-year-old will occasionally put on her coat and go for a short stroll, an ex-guardsman told The Times.

Late one night, he said he was patrolling inside the perimeter of the Palace walls when he spotted a figure in the darkness.

But to his surprise, it was actually the Queen.

“Bloody hell, Your Majesty, I nearly shot you,” he is reported to have said, on impulse.

Perhaps realising this wasn’t the tone to be used when addressing the Queen, he told The Times he expected a telling off. But the Queen reportedly took responsibility for putting him in such an awkward position.

“That’s quite all right,” she replied. “Next time I’ll ring through beforehand so you don’t have to shoot me.”

It is believed the encounter happened at the Queen’s normal weekday residence, Buckingham Palace.

On more than one occasion in recent years, soldiers on guard duty have confronted over-eager tourists and genuine assailants with their bayonets ready to run them through if necessary.

So next time you see tourists treating guards disrespectfully remember that the guards are fully entitled to take any appropriate action if they are feeling threatened and by threatening them, you are in fact threatening The Queen.

I’m not sure why people would do that?  What tourist would go to China or the USA and threaten the president or police?

With that all said it just makes the encounter that little Marshall Scott had at Windsor Castle, all the more special.

For encounters that don’t go so well with tourists do check out the video below.  My favourite is the Muppet at 1 minute which as another tourist observes ‘You Stupid Man’.

If you want to see London, Windsor or anywhere else without getting trampled to death then you know who to contact 🙂   https://yeoldeenglandtours.co.uk

I am a writer and traveller with a penchant for history and getting off the beaten track. With several books to my name including a #1 seller, I also write environmental, travel and history articles for magazines as well as freelance work. Recently I've appeared on BBC Radio and Bloomberg TV and am waiting on the filming of a ghost story on British TV. I run my own private UK tours company (Ye Olde England Tours) with small, private and totally customisable guided tours run by myself!
View all posts by Stephen Liddell →
This entry was posted in Cool Britannia, Funny & Humour, Life, News, Travel and tagged British Army, Coldstream Guards, Marshall Scott, The Army, Tours, Windsor Castle, Ye Olde England Tours. Bookmark the permalink.

6 Responses to A Cute Salute At Windsor Castle