Posted on September 13, 2016 by Stephen Liddell

Tuesday sees the Bank of England issuing the first in the range of plastic bank notes which will begin the process of phasing out paper money forever.

The first note to be issued with be the £5 note and will see Sir Winston Churchill on one side of Fivers whilst the Queen will keep her traditional place on the other side of the note.

30 countries currently use Polymer-based notes, primarily but not entirely, those in hotter climates which  impacts on the lifespan of paper money.  The new notes released by the Bank of England will feature the most advanced anti-fraud measure of any money on the planet and illustrates just what a big change has taken place in the 320 years since the Bank commenced printing paper money.

Manufactured from a transparent plastic film and coated with an ink layer,polymer banknotes are seen as cleaner, more durable and more secure than paper. The material allows the inclusion of clear “windows” to protect against counterfeits.  Additionally, the money is expected to last 2.5 times longer and no longer degrade when accidentally put through a washing machine.

Last year, 21,835 notes were replaced due to damage – 5,364 of those were chewed or eaten, mostly by dogs but one was ruined by a parrot. 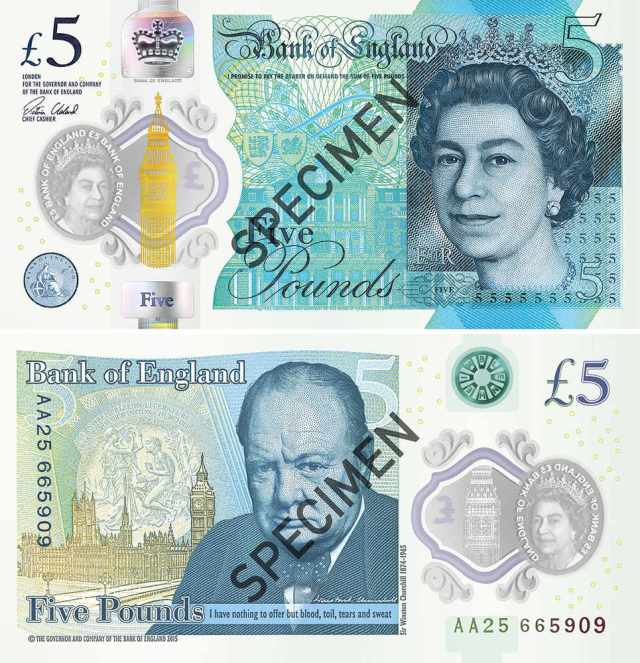 Churchill will be featured alongside a view of Westminster with Big Ben showing a time of 3 o’clock which is the approximate time on 13 May 1940 when Churchill declared in a speech: “I have nothing to offer but blood, toil, tears and sweat.”

Sir Winston’s strong leadership qualities during the Second World War earned him a vast international following, particularly in the United States where he was granted honorary US citizenship.

During his lifetime, Sir Winston received 37 orders, decorations and medals including Companion of Honour, Order of Merit, Order of the Garter and in 1953 the Nobel Prize for literature.

He died at the age of 90, on January 24, 1965, and was given a state funeral. Sir Winston was also the first commoner to be portrayed on a British coin – the 1965 crown or five shilling piece.

The first paper money appeared in 11th Century China with the Song Dynasty and came to prominence soon afterwards by The Mongols who used it across their empire.

It was Norway who first used paper money in Europe but the newly created Bank of England was quick to follow as King William III needed money for his war against France.   Initially deposits of gold would be left with the bank and a hand written note issued by a chief Cashier would declare “I promise to pay the bearer on demand the sum of …”  which in effect guaranteed the note against gold.

In the old days notes would be issued to any value but in the 18th century, it became increasingly the standard practice to issue standard values such as £20.  The guarantee to pay the bearer in gold ended in 1931 and now the notes are guaranteed against Securities rather than gold itself.

The old fiver, featuring prison reformer Elizabeth Fry, can still be used in shops until it is withdrawn from circulation in May 2017 but can still be exchanged for the polymer notes at the Bank of England afterwards.

Initially when paper notes were introduced, it afforded great potential for criminals to trick people out of their riches.  As most people were so poor that they could go their entire life without ever seeing even a small value note, it was easy to trick people out of their piles of gold and silver coins for a home-made pound note.  This was obviously highly illegal and was a capital punishment offence until the time of Queen Victoria.   These days it is estimated that less than 0.0075% of notes are forged and this tiny percentage will likely decrease with the introduction of polymer notes.

I am a writer and traveller with a penchant for history and getting off the beaten track. With several books to my name including a #1 seller, I also write environmental, travel and history articles for magazines as well as freelance work. Recently I've appeared on BBC Radio and Bloomberg TV and am waiting on the filming of a ghost story on British TV. I run my own private UK tours company (Ye Olde England Tours) with small, private and totally customisable guided tours run by myself!
View all posts by Stephen Liddell →
This entry was posted in history, Life, News and tagged £5 note, Bank of England, Churchill, Fiver, history, Money, Paper Money, Polymer Notes. Bookmark the permalink.

6 Responses to The Bank of England issues plastic £5 notes