Aphantasia – To have a blind mind’s eye

Do you ever find yourself daydreaming?  If I ask you to imagine a beach, a mountain or a three-legged lizard juggling bananas, can you do it?   Most of us can to varying degrees.  Some of us can picture it as clear as if it were happening right in front of our eyes whilst others have a more vague ability.

Would you believe that scientists have recently been working on the relatively recent discovery of people suffering from Aphantasia.  That is the inability to see with your mind.  Such people can’t picture the face of their friend.

Intriguingly, such people also can’t imagine sounds or voices.  They don’t seem to have the natural recoil we would have if we think of snakes or being in a car crash but similarly, they also don’t seem to enjoy the simple but nice pleasures such as imagining jumping into a warm bed or tucking into their favourite food.

Doing something many of us learn when little such as imaging counting sheep in our heads is not just beyond them but apparently many such sufferers have no idea that the rest of us have such basic abilities.  If they dream, they don’t ever remember what they were dreaming about.

I can only imagine that such condition makes life a little more boring and it is nice that I have finally found a tiny group of people who I have an advantage over being an asthmatic, flat-footed visually impaired introvert.   Maybe part of the reason that I am more than happy with my own company is that I have a fantastic imagination.  This can be a good thing and a terrible thing but it is never a boring way of life.

I can imagine anything and everything and often even when doing something very real in the real world end up thinking of something much more interesting and diverting.  At one place I used to work, the weekly and mind-numbingly long and boring meetings were agony for the others who sat in them.  Not for me, I used to often imagine asteroid impacts coming in through the roof with little aliens emerging and zapping people with laser guns.   Or what would happen if 1 million Mongol horseman suddenly appeared from the 13th century into modern day London.  What would happen?  Where would they go, could they defeat a modern army?  All much more interesting than the progress report happening right in front of me.  I had hundreds of these things going on in my head at any given moment and I can see them, hear them, smell them and feel them.  I’ve never really experienced a giant hole appearing in the ground with giant dinosaurs appearing out of them, ripping off the roof of the factory and horribly devouring all the people I didn’t like but I do in my head.   To not have that must be a little  bit boring.

As for dreams, I could sell tickets to my dreams and make a small fortune.  Some of them are really scary, some of them are funny and I laugh at the jokes later in the day.  Some are like movies and have a certain way of being filmed.  Period ones are sometimes in black and white or even sepia.  Some have special effects and are on an epic scale.  Other times I might just be a mouse scurrying in the undergrowth or wind blowing through the branches of a forest.  The amount of times I spend much of the day humming the original music in my dreams is unreal.

It’s fair to say that often my minds eye is better than real-life and sometimes I do have problems distinguishing between real events and imagined ones.  I’ll leave it for another time to tell you of that time I was out partying all night with Beyonce 🙂

Maybe it is because I’m very creative and of course enjoy my writing.  I have more ideas in my head than I know what to do with.  As Terry Pratchett once said, there is no such thing as writers block and its true, I just don’t know what that is.  There is time-block, there is real-life intrusions block, there is even I am physically too tired to write block but not writers block.

The BBC have an online test for Aphantasia and surprise-surprise, whatever Aphantasia is, I have the opposite.  I scored 40 out of 40 which means I have hyperphantasia or exceptionally strong visual imagery.  You can take the test for yourself here and whilst you do that, I have just imagined there is £1million downstairs but oh-no a 6 legged crab alien with the face of a donkeys behind is waiting to jump… well scuttle me at the bottom of the stairs.  Thankfully in this world, I have Force-like powers and have slammed him into the kitchen worktop ready to make crabsticks out of him for my salad later.

Anyway where were we?  That’s the problem with hyperphantasia, you can get distracted very eas… hey did I ever tell you of that time when I got flushed down a toilet only to end up on an Australian beach where having had my legs eaten off by a crocodile, I was rescued by a kindly Japanese man who informed me I was in WW2 before skewering me with his bayonet?  I still remember that dream when I was 7. 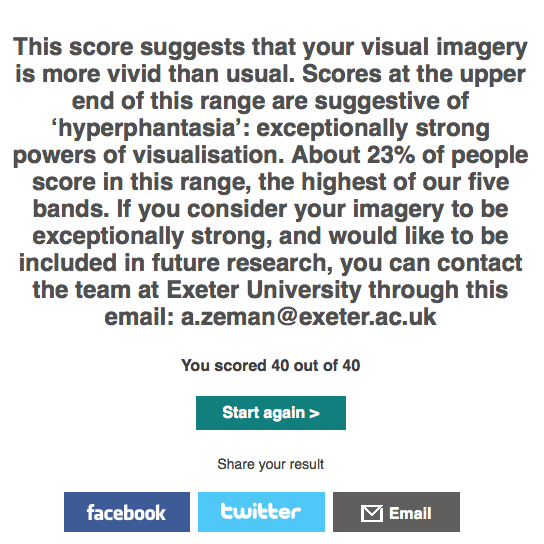 Last week, the world was rather taken by storm by a chap called Blake Ross who had lived his entire life suffering from Aphantasia and not realising that most of the rest of us have the ability to visually, audibly or any other sense-bly imagine things.  It obviously hadn’t hurt Blake one bit as he has a very successful career with Facebook as well as being involved in creating the Firefox web browser.  Funnily enough, a significantly higher proportion of his friends also suffer from Aphantasia and it has come to be believed that such people are very strong when it comes to logic and methodological reasoning which I guess is what you need in a Facebook designer though perhaps the lack of imagination explains the flaws with Facebook too.

As I wait for the professor at Exeter University to email me back with some tests, tests which my hyperphantasia laden mind imagines could either be really painful or perhaps more excitingly, somehow send me to another time, world or dimension, you might want to read on as Blake Ross experiences the revelation that there a whole  a whole side of human existence which is unavailable to him, even more so considering Blake also enjoys writing too.   You can read rather large extracts of his post below.  BTW he talks about having a Milk Voice rather than visual imagery in his head or even hearing voices in his head and the whole concept is so new to him he didn’t realise that most of us don’t know what a Milk Voice is or indeed have a Milk Voice but its obviously important to him.

It is hard not to feel like a sociopath when you’re lying about how you spent your Monday and you don’t even know why.

I’ve always chalked this up to having “bad experiential memory,” a notion I pulled out of thin air because “bad memory” doesn’t fit: I can recite the full to-do list of software I’m building. On a childhood IQ test, my best performances were on Coding and Digit Span, both memory-driven. Given an increasingly long string of random numbers, I hit the test ceiling by repeating and then reversing 20 digits from memory on the fly. My three worst performances were on Picture Completion, Picture Arrangement, and Object Assembly. I couldn’t put the damn images in order to save my life.
Perhaps none of this is aphantasia. But when I ask a friend how he how-was-your-days, he gives me a tour of the visualizations in his mind. The spaghetti bolognese; the bike ride through the marsh; the argument with the boss, and the boss’s shit-eating grin, and gosh how I’d love to punch him in the mouth, and can’t you just see it now? He says that looking back on his life is like paging through a Google Image search sorted by “most engaging.” He tells me that when he’s on the road, and loneliness knocks, and the damn Doubletree bed is a little more wooden than usual, he replays the time they tried to make sushi together—but the rice kept falling apart!—and we couldn’t stop laughing!—and did you know it burns when sake spews out your nose?—and that’s when she feels closer.
I wonder if it’s why I have such an easy time letting go of people.

Is It Really Obvious?

I learned what it means to count sheep from a friend who was also teaching his daughter.
That is ethereal. Musical. Hysterical. Eye-rollable rom-com mix-up stretched past the point of plausible. Oh but when you said—oh I thought you meant that—Ohhhh! Haha! How could you not know? What did you do when mom told you to tend the flock at midnight?
Well, here’s a little Sixth Sense ending of your own: The final member of Aphantasiacs Anonymous turned out to be my mother.
Imagine that.
Some people don’t find out until they’re 50. Some never do. How close did I come to asking the right question all these years, only to stumble on a Facebook article? Brand new writer has no imagination! Oculus on the eyes, blind in the mind! The clickbait headlines write themselves, and maybe next time your jaded ass should bite. You never know.
Before I told her what was going on, Doriane offered this:
I think what makes us human is that we know we’re the galactic punchline, but we can still laugh at the setup. The cosmos got me good on this one. How beautiful that such electrical epiphany is not just the province of the child. And were the bee’s knees real, too? And have the cats worn pajamas all along?
I don’t think so.
But if I see it, I’ll be sure to tell my people. ❧
You can read the Blake’s post in its entirety by clicking the link below.

I am a writer and traveller with a penchant for history and getting off the beaten track. With several books to my name including a #1 seller, I also write environmental, travel and history articles for magazines as well as freelance work. Recently I've appeared on BBC Radio and Bloomberg TV and am waiting on the filming of a ghost story on British TV. I run my own private UK tours company (Ye Olde England Tours) with small, private and totally customisable guided tours run by myself!
View all posts by Stephen Liddell →
This entry was posted in Life, Uncategorized, writing and tagged #WPLongform, Aphantasia, creative writing, Dreams, Facebook, Funny, Humor, Humour, Hyperphantasia, Imagination, Life, Long reads, Medicine. Bookmark the permalink.

10 Responses to Aphantasia – To have a blind mind’s eye