One of the attractions for me to come to Dubrovnik was not just to see this magnificent city and the beautiful Croatian coastline but because of its close proximity to the other former Yugoslav republics, all of whom are now countries in their own right.

One of the places I have always wanted to visit was Mostar.  For those of us in the West of my age and above, Mostar will always be synonymous with the awful war there in the 1990s, the countless deaths and massacres in relative close proximity perpetrated by Serbia on Bosnian Muslims. Dramatically, the bridge which I wanted to visit and what I was studying at the time was blown up after being targeted in over 60 separate attacks.

Happily the bridge has been rebuilt as it and the surrounding streets enjoy a Unesco status. Still, the wounds of the war have not yet healed, land mines lay about Bosnia and the country which was most badly devastated during the war though rich in natural resources is perhaps not so attractive to tourists or their money if only due to the devastation caused and is still comparatively impoverished.

Waiting with my lovely guide for the bus at Dubrivnik

Still, I really wanted to visit and always prefer to go where few others dare. I was lucky to have found some really great guides who would help me with this quite epic trip. I was still daunted though as I know Mostar is plagued by crime induced by poverty and I was particularly unwell that morning suffering from a stomach bug I’ve had since just minutes before I left my house days earlier.

I met my guide Danijela near the Dubrovnik Hilton hotel at 7.30am and soon afterward the minibus style vehicle arrived. I was the only one going to Mostar but I quite liked it as I could develop a good rapport with my guide and also the driver, Leo.  We chatted away for hours as we drove along the coast until we came to the first border crossing. 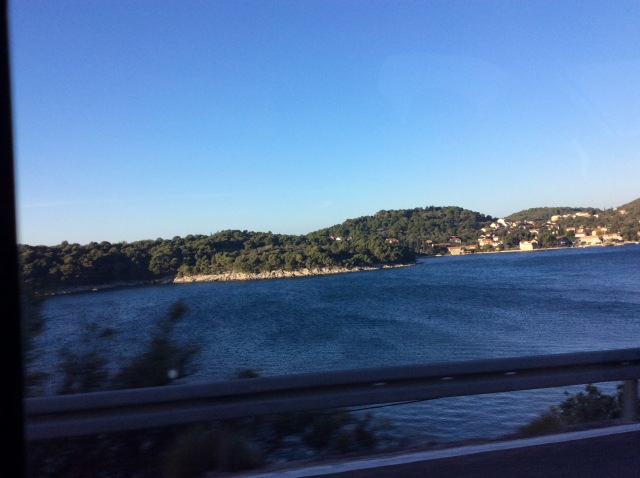 The borders of Croatia and Bosnia are a little complicated as a narrow section of Bosnia reaches the sea and splits Croatia in two. The reason being is that centuries ago, the powerful Venetians were snapping up all the Dalmatian (Croatian) coast and Dubrovnik was getting worried. To stop Venice getting to close, Dubrovnik invited the Ottomans to take over thus stretch of coast in a similar manner to nations inviting American, British or French bases to deter hostile aggression. I suppose even then it was the case of better the devil you know.

So we drove from Croatia into Bosnia and Bosnia into Croatia and then Croatia into Bosnia, each time stopping twice at each border for various checks. Finally as the terrain turned very mountainous and spectacularly rugged, we headed into Bosnia for the second time.  It was one of the most beautiful and memorable journeys of my life, the autumnal colours and Mosques gave a distinct central Asian feel to me.

I had spent 4 years studying Ottoman (Turkish) history at university and it was exciting to finally arrive in one of their strongholds, many of the mountain tops still have old castles from the fierce battles the Ottomans and their plucky opponents waged. I stopped off at the village of Pocitelj which is distinctly Turkish in appearance with steep narrow streets, stone towers, a Hammam and of course a mosque. The steep path into the village was lined with ladies offering to sell me all manner of goods. I felt sorry for them but only had so much use for all of what was being sold. I was their only tourist of the day but even bring nice, I knew their prices were high and aimed at the summer coach crowd who know the value of nothing.

Pocitelj castle guarded the ricer and road from raiders and invaders. Pocitelj is what i woukd call a Caravanserais, a place where traders sleep overnight on the way to Mostar. 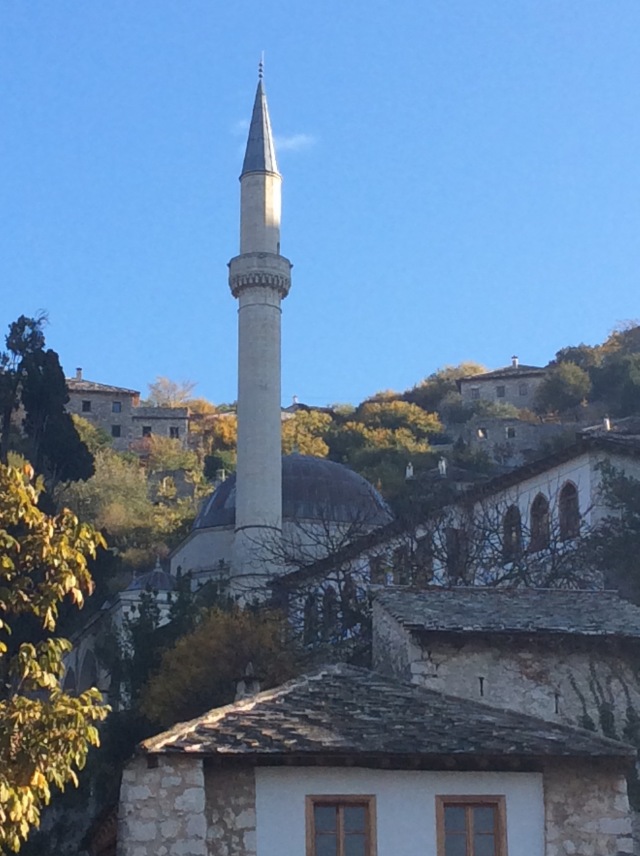 Right frim the beginning Bosnia felt like a very different country and iI really love it. 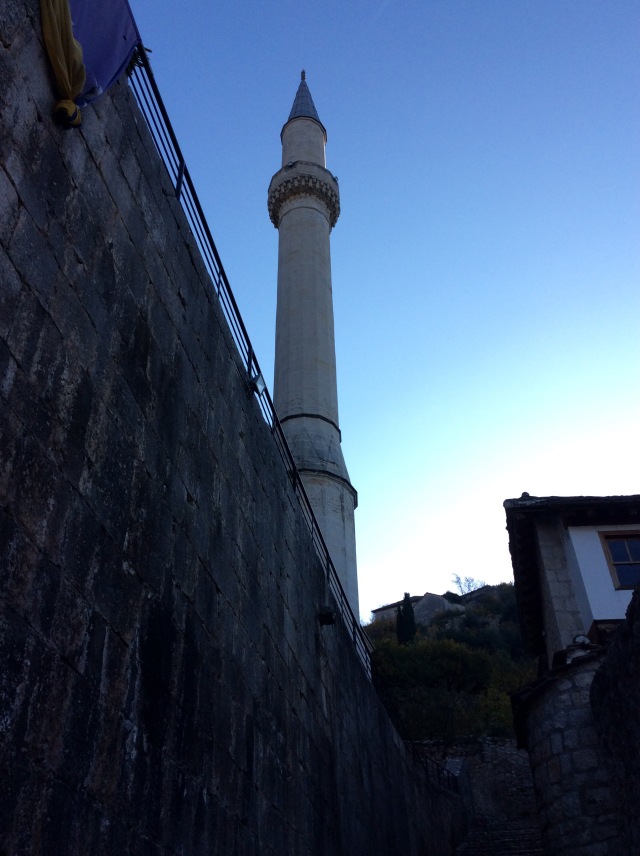 I bought a few items from the man who looks after the mosque and he graciously opened up for me. Like everyone else I met in Bosnia, he was extremely nice and I felt very at home.  The mosque itself was rather plainly decorated in comparison to the austentatious mosques of Egypt, Syria, Iraq and Iran but in a more artsy style than those in the U.K.

I continued on my way through ever more beautiful terrain, road signs coming into sight which stirred memories, Sarejevo, the city that started WW1 and which in the 90s was ruined and under siege for around 5 years. Other names of places I knew from battles and killings and it is sad that 20 years later, that is all I still know them for.

Many places in Bosnia were almost totally destroyed (including the mosque I had just visited) and everywhere there are signs of both huge construction and improvement projects and also more than a few ruined buildings. It really was an interesting journey with lovely people in the most intensely sunny autumnal day.

Standing in front if the mosque with the River Neretva behind me. Those with good memories like myself may remember thecold WW2 film of The Battle of Neretva about the heroic Yugoslav Patriots… now you know where it took place.

After travelling since 7.30am, we finally reached Mostar at around 11am. We were a little early and Danijela went out to find my local guide as the bus couldn’t stop at its usual place due to construction work.  I’d been waiting to visit Mostar for almost 25 years and at last here I was. A few minutes later my Bosnian guide arrived. I wondered what to expect but like everyone I’d met in Crostia and Bosnia she would turn out to be lovely.

UI’ll continue my Mostar trip tomorrow as I got held up doing a BBC radio interview on my Airbnb book last night and so am a little behind… I want to do justice to Mostar and I am on holiday too 🙂  mire posts to come on Mostar, Dubrovnik, Mobtenegro and Casino Royale and not forgetting that minor to show, Game of something or other.

I am a writer and traveller with a penchant for history and getting off the beaten track. With several books to my name including several #1 sellers. I also write environmental, travel and history articles for magazines as well as freelance work. I run my private tours company with one tour stated by the leading travel website as being with the #1 authentic London Experience. Recently I've appeared on BBC Radio and Bloomberg TV and am waiting on the filming of a ghost story on British TV. I run my own private UK tours company (Ye Olde England Tours) with small, private and totally customisable guided tours run by myself!
View all posts by Stephen Liddell →
This entry was posted in history, Photography, Travel and tagged Bosnia, history, holidays, Life, Mostar, Ottoman Empire, Photography, Pocitelj, road-trip, Travel, vacation, war. Bookmark the permalink.

2 Responses to Day trip to Mostar in Bosnia Herzegovina