My guide for tour of Mostar was to be Armina, a friendly and talented young lady who led me around the city for over an hour. Mostar was famously perhaps the most devastated city in Yugoslavia, it being divided between Muslims and Christians. Like many in the city, Armina though a Muslim, thinks in the far distant past, her family were Orthodox Christians.  This is because by and large the Turkish Ottomans didn’t conquer lands to populate them but rather over centuries of increasing social pressure and tax incentives, the local people converted to Islam over time.

Famous for its bridge, at first we visited a smaller bridge which was in fact a proto type for its famous sibling. There is also a more modern flat bridge that was built so Franz Ferdindand could drive his new fangled car into the city.  It wouldn’t be the last time, the Ferdinands and cars would cause problems in Bosnia.

Next up was a Turkish bath with its trademarked domed roof and lack of Windows. Next to the baths is a small mosque which when it was built centuries ago had its prayer goers praying in a stream for reasons no one quite know why. The steam is still there but now goes in a tunnel under the mosque.

One of the incredible things that strikes any visitors to Mostar is how it is surrounded by very high and steep looking mountains with a large and fast flowing river flowing through it. 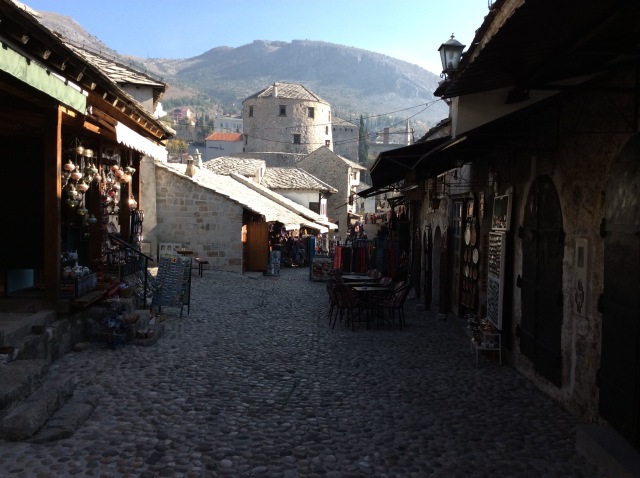 We walked down an ancient lane which can’t have changed much in 500 years. On both sides stood small shops selling food and wares, many of a most distinct and beautiful Turkish style design such as lamps, clothing, rugs and cushion covers.  Usually the area is packed out with coach loads of tourists but today it was entirely empty which both Armina and myself were very grateful for.

At one point I asked her about the reputation for street crime and she confirmed it was a big problem and mire so in the last year since gangs from out if town have arrived.  In fact she’d gone so far as to ask them to at least her groups alone!

After walking through the cobble-stone streets at last we reached Stari Most . Most is the local word for bridge and the Stari were men tasked with guarding it, similar to gatekeepers, charging users for crossing the river. And so with Stari Most we get the name Mostar.

Stari Most – The old bridge of Mostar. The raised paving help hirses grip the slippery surface. 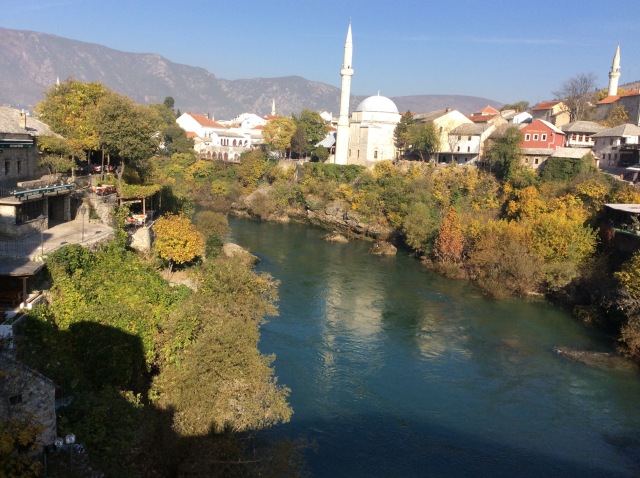 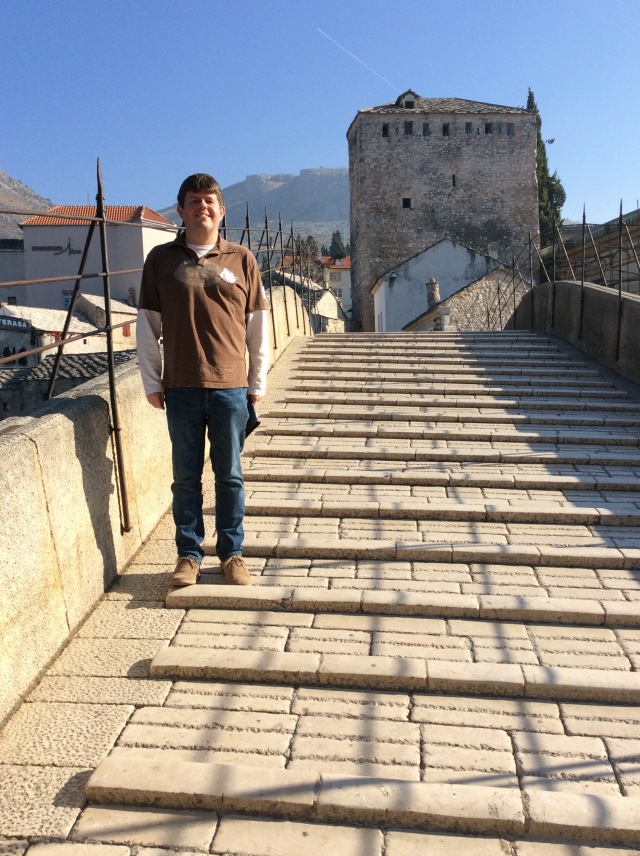 I have Mostar bridge, a world heritage site to myself. 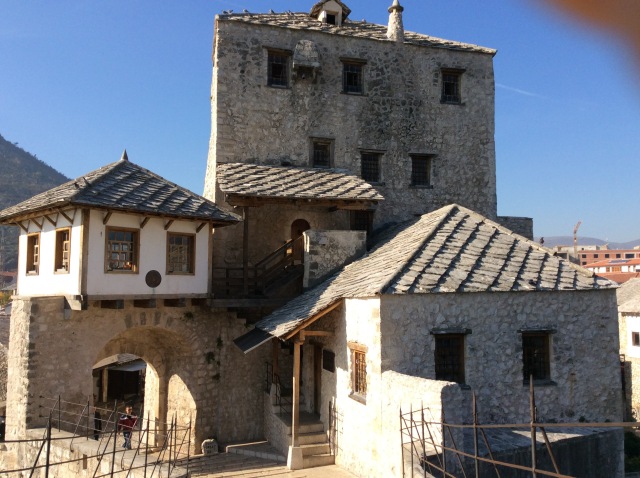 The bridge was built in 1566 by the esteemed architect Mimar Siman working on the personal orders of Ottoman Sultan, Sulayman The Magnificent (who incredibly lives up to his name). It measures 28 meters long and 20 meters high (90′ by 64′) and was built to last and under heavy loads. Sulayman may have been magnificent but he also insisted on his orders being followed. If the bridge failed then Mimar would suffer the punishment of death. The bridge was opened and Mimar had to stand under it so to be crushed to death if his bridge fell, happily for all concerned, it stood until the 1990s.

The old bridge quickly became a classic and even by the 17th century, legendary Ottoman travel writer Evliya Celebi wrote…

the bridge is like a rainbow arch soaring up to the skies, extending from one cliff to the other. …I, a poor and miserable slave of Allah, have passed through 16 countries, but I have never seen such a high bridge. It is thrown from rock to rock as high as the sky.

Every year the locals hold a diving contest and jump into the river far below.

In the 1990s the bridge was deliberately targeted over 60 times before it was finally blown up.  Happily after the war, Unesco sponsored it’s reconstruction using local workers, original techniques and even original stone blocks retrieved from the river bed. 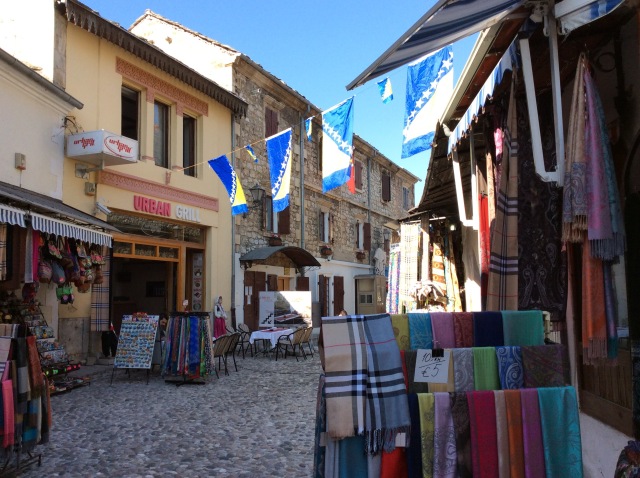 Just me in Mostar 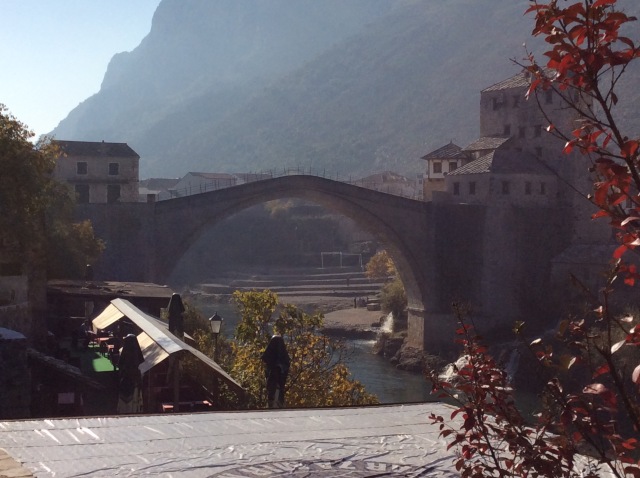 I had always wanted to visit the bridge, at least for 25 years and it was incredible having it all to myself on such a warm and sunny mid-November day. I loved the rugged old buildings and dramatic mountains so it all surpassed my expectations and I’d go as far as to say Mostar is one of my favourite places in the world.

We continued the tour and went deep into the old town and the beautiful old streets with many locals but no other tourists. Next we went to the Koski Mehmed Paša Mosque which is now largely a museum / tourist site having been rebuilt back around 1616. On the outside is an attractive courtyard with a fountain for the faithful to wash before going to pray. 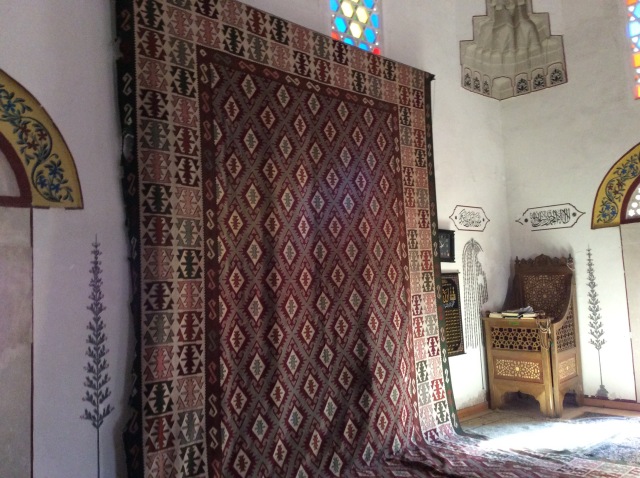 Inside the mosque is beautiful with all the things we saw in the earlier one in yesterday’s post but this one is more lavish. I knew most of what I saw but my guide was great on expanding on the details and what life is like for those who came here. One wall and the floor is entirely dominated by a large carpet, a gift to Mostar by Franz Ferdinand on his visit before ww1.

The river flows right by the back of the mosque and the view is breathtaking.

Finally my guide took me further into the old town and to one of only 3 remaining Ottoman houses. Once in the ownership of a wealthy local family, it was beautiful with its two courtyards, ornate interior and the open and airy upstairs and back room where they would spend their time in the summer.

Like many Islamic designs, this fountain is highly symbolic. The 3 stools reoresent birth, lufe and death, The top layer of the fountain has 12 grooves from which the water flows representing tge 12 months. The lower level has 4 grooves for the seasons whikdt all the water recycles itself symbolising the wheel of life. 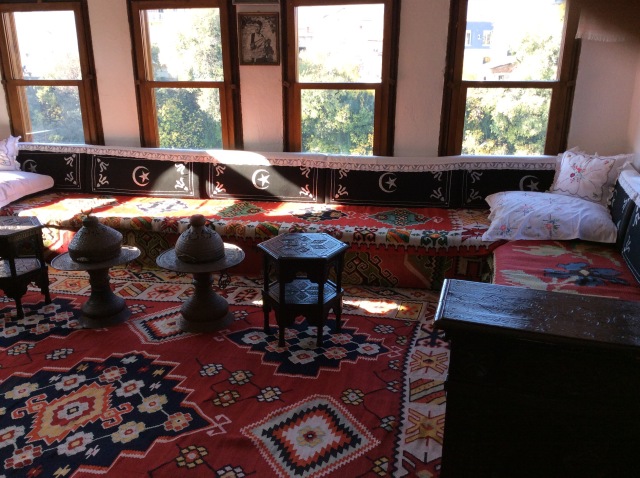 I chatted with Armina here for some time, we had quite a laugh actually. I love meeting new people especially when you instantly click with someone from a different culture and country. We also shared our own perspectives about being tour guides and had lots in common.

Armina left me in the old town and I decided to browse round the shops, I could have bought lots of things but only bought what I could carry! All the shop keepers were very friendly and not at all pushy.

With 90 minutes to spare, I went into a local restaurant and ordered a plate of Cevapi, a Bosnian speciality. Soon a local beer arrived along with a plate of chips (fries), salad, 9 or 10 rolled lamb kebabs and some bread, a little like pitta bread but more volumous. The idea is to stick the kebabs in the pocket that is cut into the bread. I must say it was one of the best meals I have ever had. A perfect view and all for just €7. 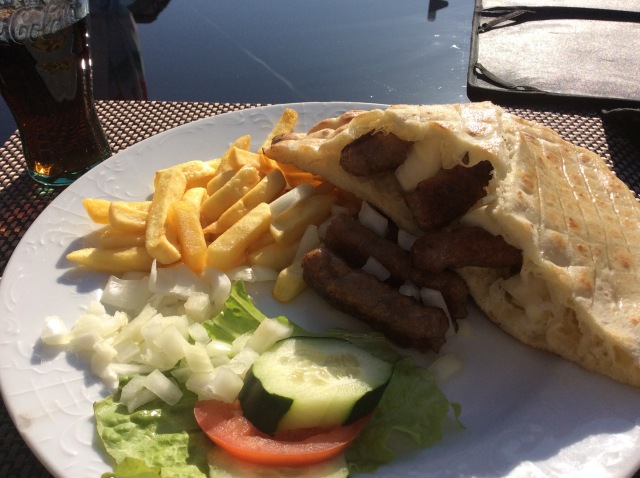 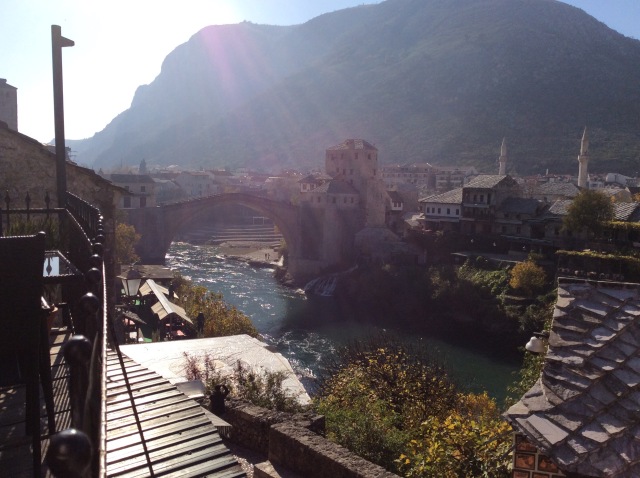 The view of Mostar as i ate

I really didn’t want to leave Mostar, such an incredible place that I had wanted to visit for do long. I felt a great affinity for the place and the very friendly people. I hope my post might encourage even just one person to go there.

I made my way back to Danijela and Leo, over the bridge and buying some gifts for my wife. I then stopped to take a few photos of bombed out buildings, an awful reminder of the war  almost 20 years ago. I’m in no doubt when I return, they will have been replaced by new buildings.

Sadly I was presumed a small way by a young mother wanting money. Normally I would have given her something but I really did have my hands full and with lots of people watching me, I felt it safer to carry on though 3 days later I still feel bad for doing so. I did at least do my best supporting local businesses.

i have Mostar to myself

The ruins of war in Mostar

I met my guide for the trip back to Dubrovnik next to this astoundingly magnificent church and monastery. In the old days the Ottomans didn’t allow any church steeple to be taller than the tallest minaret but as over 13 mosques were destroyed and many churches too, more enlightened times mean the reconstructions can be as tall as they like.

I’ll never forget my trip to Mostar, it was epic in every way and I’m happy to have become friends with my two guides.  On the way back to Dubrovnik I stopped for photos with Danijeka and Leo before driving along the Crostian coast as the sun set over the Adriatic Sea.

The next day was to bring another day out to another country. Come back soon for my trip to Montenegro, churches on islands and my visit to Casino Royale.

The day was also my own little way at getting back at Islamic terrorists showing I’m not afraid of visiting Muslim nations as we are all the same and the one thing they don’t like is people showing tolerance and acceptance if different people, cultures and religions. I hope this blog post shows what a real Muslim city is all about and why I so badly wanted to visit Mostar. 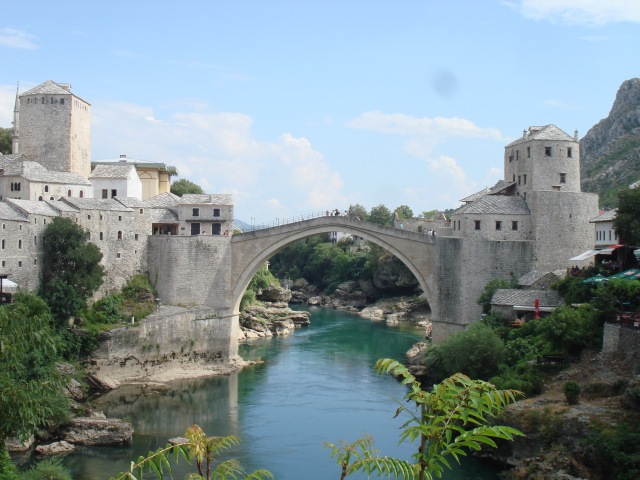 I am a writer and traveller with a penchant for history and getting off the beaten track. With several books to my name including a #1 seller, I also write environmental, travel and history articles for magazines as well as freelance work. Recently I've appeared on BBC Radio and Bloomberg TV and am waiting on the filming of a ghost story on British TV. I run my own private UK tours company (Ye Olde England Tours) with small, private and totally customisable guided tours run by myself!
View all posts by Stephen Liddell →
This entry was posted in history, Photography, Travel and tagged Bosnia, Bosnia Herzegovina, history, Life, mosque, Mostar, Mostar Bridge, Ottoman Empire, Photography, Stari Most, Tours, Travel. Bookmark the permalink.