The Black Marble : The Earth from Space at night

Posted on December 8, 2012 by Stephen Liddell

Last week NASA released a number of fantastic images detailing our planet at night under their Black Marble project.  It took hundreds of orbits before the planet could be fully mapped and below are some of the images which I though might be of interest to people.

View from Space of planet Earth

One of the amazing things of the photo above is not just how much urbanisation there is on the planet but even more so of how vast tracts of the planet seemingly have no street lights. 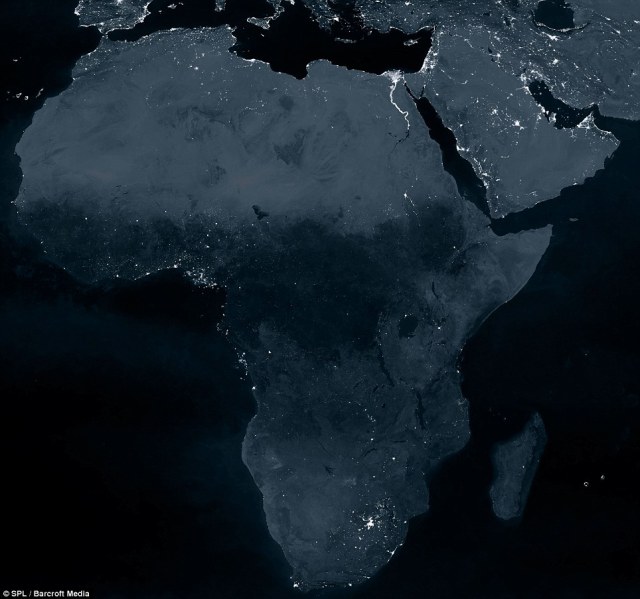 Africa at night from space.

The image above shows the beautiful continent of Africa.  Notice even at night you can see the desert sands in the north and the lush vegetation of central Africa.  Most of the lights here are on the Maghreb on the North Coast, the Nile Valley, Nigeria and South Africa.   If you know your geography you can trace the continental highways and follow the Nile.  Similarly you can really marvel at the road networks and cities in the Arabian Peninsula.

Europe at night from space.

This photo highlights the light output differences between Europe and Africa.  It is easy to see the main centres of population across the UK, Low Countries and Germany.  Further east the large cities of Moscow and St Petersburg and to the south east you can see Georgia and Iran and Iraq.  Notice also the coast outline around the Mediterranean Sea from Portugal along to Italy.  On the far left of the photo the lights of what I presume are New Foundland and possible at the extreme west New York are visible. 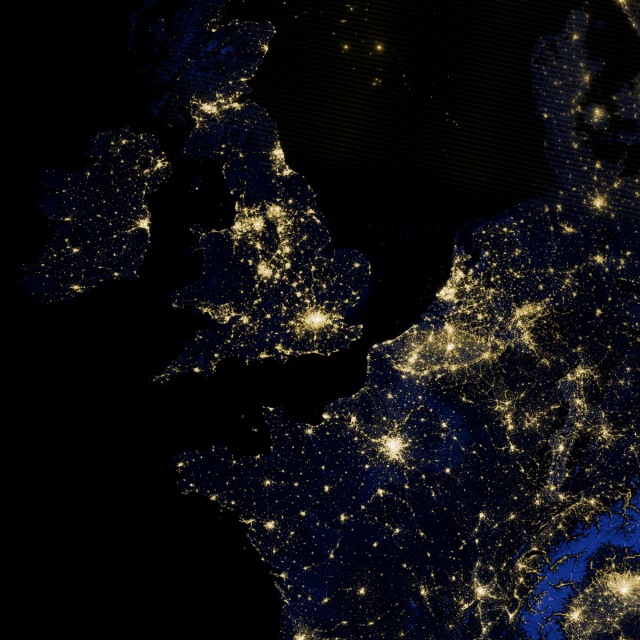 NW Europe at night from Space

One of the interesting aspects of this photo is that you can see the gas and oil flares from the rigs in the North Sea.  Except for Paris, France looks relatively sparsely populated.  Large cities can be seen in Holland, Belgium and NW Germany as well as Austria.  In the UK the south-east is dominated by London and elsewhere by the large cities of the West Midlands, NorthWest, NorthEast and Central Scotland.  Yet if you zoom in you can how few settlements there are in East Anglia and most of Wales.  Much of Northern England appears empty above Manchester and Leeds and west of the bright splodges of Newcastle and the surrounding cities.  Most of Scotland appears the same. 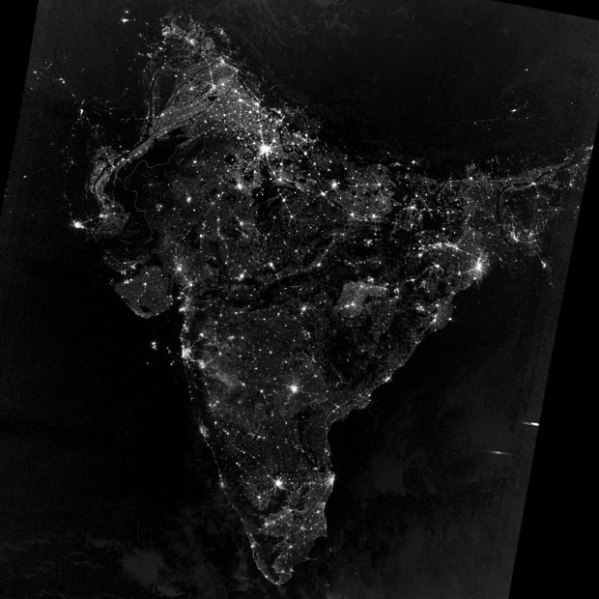 India at night from Space

The photo above centres on India.  Even from a quick glance you can see the borders of this populous country in the north where the Himalayas limit the possibility of human habitation.

The USA at night.

The photo above focuses on the USA at night.  It’s clearly obvious here that most of the population live in the Eastern half of the country, in the North-East in particular.  California also stands-out whilst much of the centre looks sparsely populated save for the odd city.  On the far right of the photo the likes of GB are just visible.

East Asia from space at night

The image above shows the Far East from space at night.  Japan and South Korea are highly visible whilst the reclusive North Korea is notable only by its complete absence.   Further west one can’t help notice the profusion of light coming from Shanghai, China with Beijing further up.  The dark mass above is beautiful but lonely Mongolia. In the sea lines of fishing trawlers and drills show the extents of international mining boundaries.

Asia and Australia at night from space

The photo above shows everything from the Persian Gulf to Japan.  Note the bush fires in Australia.

EMEA at night from Space

The wonderful photo above is one of my favourites.  Typically there is a veil of cloud over much of the UK and France so Europe looks much darker than it might otherwise be.

The UK at night from space

The photo above shows the parts of the UK from the an unusual angle of above Calais, France. 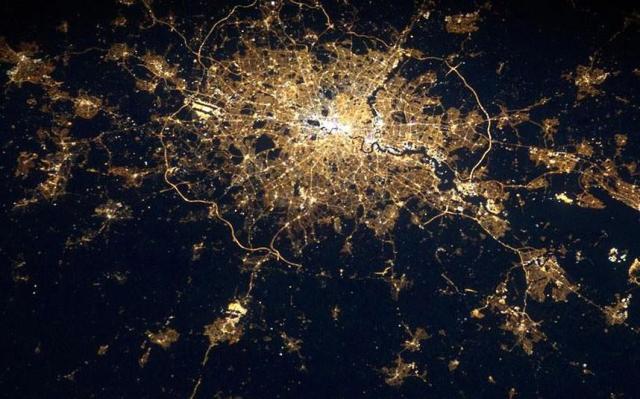 London at night from Space

The image above is of London at night take from a slightly tilted angle.  The orbital motorway that I spend half my life on is easily visible.  The dark ribbon of the River Thames can be seen and the dark splodges in central London are the Royal Parks around Buckingham Palace.   Heathrow Airport is clearly visible to the west of central London just inside the motorway.   For those interested where I live, see the the tiny white square I have placed at the top just below the only part of the photo where the M25 motorway disappears.  Literally the top of London with fields at the end of the street!

I hope you enjoy the fascinating and beautiful images of our home, Earth.

All photos are courtesy of NASA.

I am a writer and traveller with a penchant for history and getting off the beaten track. With several books to my name including several #1 sellers. I also write environmental, travel and history articles for magazines as well as freelance work. I run my private tours company with one tour stated by the leading travel website as being with the #1 authentic London Experience. Recently I've appeared on BBC Radio and Bloomberg TV and am waiting on the filming of a ghost story on British TV. I run my own private UK tours company (Ye Olde England Tours) with small, private and totally customisable guided tours run by myself!
View all posts by Stephen Liddell →
This entry was posted in geography, Life, Science and Engineering and tagged Beauty, Life, Maps, nasa, photos, Space, The Black Marble. Bookmark the permalink.

8 Responses to The Black Marble : The Earth from Space at night