Progress on doing up my new but ancient house continues but at a pace even snails would surpass.  It’s all down to this virus and I’ve even been thinking of bringing my new front garden bench into the house so I can sit on it and watch television.   At the moment to spread out I have to lay flat on the floor and rest my head on some cushions and it’s been that way for almost 5 months now with no end in sight.

I did though take delivery of the first batch or plants for the back garden, this is in part of the reclaimed section.

The quite large plant at the bottom left is a Hydrangea and it offers large blue, pink or white flowers depending on the acidity of the soil.  The plant next to that that looks half dead is a sort of Japanese daisy which will apparently come back to life!

Where the large gap is above the purple lupin will be home to a flowering Japanese Cherry tree one day… hopefully.

Lupins like those on the right are traditional cottage plants and against the fence are two Clematis which will grow over the fence and produce flowers too. 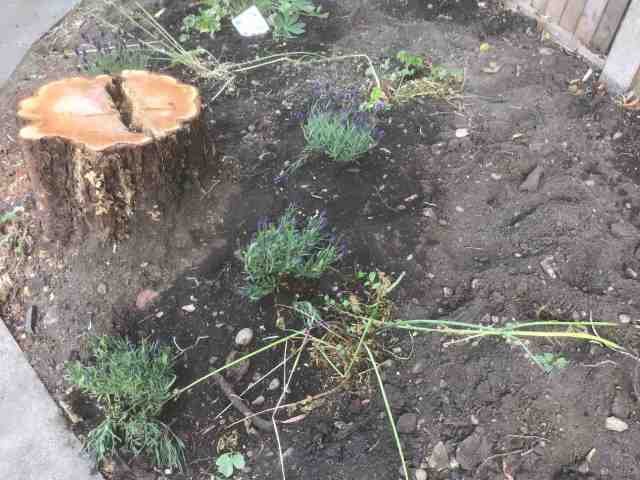 Around the old tree stump I have planted some heather plants and again those dead looking plants are Bluebells which are now way past their flowering season.  Though you can’t see it here, I have ordered a yellow witch hazel which is another traditional tree with mystical and healing properties which looks its best in mid-winter.  I thought to myself as I do so many tours (usually) I actually am around my garden more in the winter than any other time of year so I have also ordered some bright red ornamental grass which comes into its own in the winter also.

I’m not quite sure what the purple flowering plant is but it fits ok.  I found so many large pots and containers in the undergrowth, I don’t know where to put them or how to fil them but I have two olive trees on their way so that will be a start.

I am a writer and traveller with a penchant for history and getting off the beaten track. With several books to my name including a #1 seller, I also write environmental, travel and history articles for magazines as well as freelance work. Recently I've appeared on BBC Radio and Bloomberg TV and am waiting on the filming of a ghost story on British TV. I run my own private UK tours company (Ye Olde England Tours) with small, private and totally customisable guided tours run by myself!
View all posts by Stephen Liddell →
This entry was posted in Life and tagged Coronavirus, Coronavirus Diary, Covid19, Diary, garden, Gardening. Bookmark the permalink.

2 Responses to Coronavirus Diary 52 -Social Distancing the back garden